Nature is full of weird and wonderful things. While much of it is beautiful, some of it, not so much.

And while these exceptions may not be as dazzlingly gorgeous as a rose or a bird of paradise, they are proof positive that not only does Mother Nature have an eye for beauty, she also just so happens to have the sense of humor of a 12-year-old boy.

In a Facebook post that is going viral, a plant called the Nepenthes Holdanii is sprouting a bunch of hilarious NSFW comments, over 16K in fact, because of its striking resemblance to a penis.

Stunning World, an Arts and Humanities website that celebrates “everything that makes this world an amazing place” posted photos of the phallic wonder on their Facebook page where it has amassed 19K likes and 54K shares.

Seems there’s an awful lot of plant enthusiasts out there.

According to the caption, the Nepenthes Holdanii is a carnivorous plant that grows west of Cambodia, approximately 600-800 feet above sea level.

In addition, it states:

They use passive trap to catch bugs. The top edge of the plant, known as Peristomo, separates the nectar that attracts bugs into his death trap.

In the plant’s mouth, a slip layer called epicuticular wax causes the insect to lose balance and to slide to the base of the trap, full of rainwater, where they are finally struck.

But let’s face it, it’s not the scientific jargon that has everyone’s tongues wagging. It’s the photos.

Warning: These pictures are for “mature” audiences only.

Yup, that’s definitely a schlong sprout. Or as one commenter called it, a “penis fly trap.”

And while the pictures themselves are something Hugh Heffner would definitely approve of, it’s the comments, you guys, that take this to a whole other level. Down down down. Right into the gutter, you dirty birds.

Because when it comes to salacious horticultural specimens, people just can’t hold back. Apparently.

It didn’t take long for the internet to do what it does best — and that is to make one giant stream of dick jokes. As one does.

Naturally, people couldn’t help themselves and poked a little (okay a lotta) fun at the pecker plants, starting with stating the obvious…

And since we’re on the topic of sex, size matters. (No matter what she tells you.)

Because we’ve all seen Seinfeld. We know what happens when you water them.

Begging the question, what IS the best way to make them grow? Inquiring minds want to know.

While the “Nepenthes Holdanii” may be native to Cambodia and “hard to come by,” based on the comments it’s obvious they’d be a welcome addition to any lady’s garden.

(Although you may want to double-check the care and watering instructions first. See above for details.) 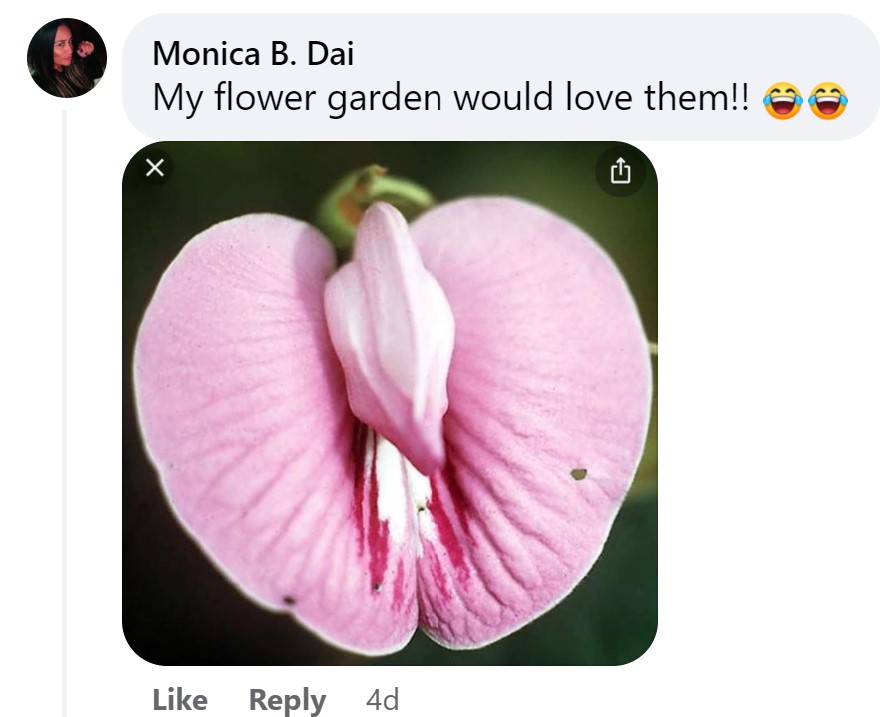 I just bet it would. The HOA? Maybe not so much.

There’s no denying they have their uses…and not just for the reason you may think.

Bonus points, they kill bugs without us even having to ask.

Of course, not everyone’s a fan.

Some will take a hard pass, thankyouverymuch. They’ve been there, done that. A few times.

Or they know someone who has…

And then there’s this guy…who’s ready to give us all the shaft.

Just in case you’re sitting there, shaking your head and saying, “there’s no way” these actually exist…

While it is extremely unlikely that you’ll be seeing these plants in the wild anytime soon, unless you’re planning a vacation to the remote region of the Cardamom Mountains in Cambodia, you can always check out Stunning World’s post to fill the void.