When it comes to doing the wild thing, it’s all well & good when things get hot & heavy… until things hit the, um, boiling point, and then it’s time to cool down.

And once you’re “coming” (pun intended) back down from the heights of passion, there’s nothing that kills the post-coital glow quicker than…

Don’t lie; we’ve all been there. Literally- IN IT.

You’ve accidentally rolled into it a few minutes later & what was once the blazing heat of hot love is now a chilly, gnarly pool of nasty.  Or perhaps you’re savage enough to plan in advance for the bump & grind to happen on your partner’s side of the bed- that way he or she “chilling” in it.

But maybe you plan for it. Before getting down, you’ve got a towel to protect your sheets. Granted it’s practical, but “psst… honey… where’s the towel?” isn’t the kind of sweet-talking that puts one in the mood, you know?

(And ok, ladies, since we’re talking TMI anyway: how about hours after sex, when you’re dressed & going about your business, only to have a leaky, lube-y “reminder” of your sexy-time in your undies??)

Have no fear- there’s a miraculous solution to that excess moisture. Instead of letting things ooze all out into that infamous wet spot, here’s a way to quickly minimize most of the mess.

There is now a new product available on the market that is perfectly designed to handle after-sex clean-up, and it’s simply brilliant.

Ladies and gentlemen, I introduce you to: The Come&Gone Sponge, made by, well, GetCome&Gone.com. 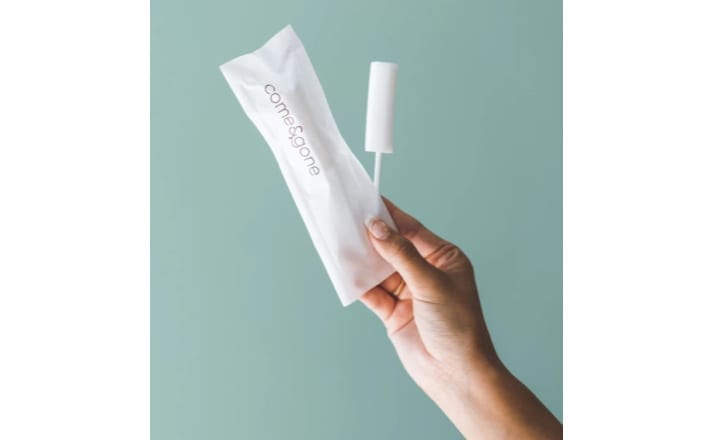 I mean, come on; the name alone makes you chuckle, no? Let’s see how this product makes the cu- I mean “COME” all gone!

As the picture reveals, the product looks quite simple. The top consists of a sponge that absorbs all of the excess fluid after sex.

It’s not your average kitchen-sponge quality of course, folks. According to the description,

It’s made out of soft, sterile, medical grade material.

Ok, good. So at least you know you’re mopping up with some medical-grade stuff. No “so- so” sponges for YOUR sexy stuff!

The Come&Gone Sponge basically acts like a tampon; you insert the product up inside of you and gently rota-rooter your hoo-ha until things and nice & dry.

While it sounds more like an ad for a paper towel brand, it definitely makes the act of post-coital cleaning sound a helluva lot easier than grabbing a giant towel…

If you’re still not envisioning the process, the website offers a pretty vivid demonstration, using a Twinkie as your… well, let’s just say I’ll never look at a Twinkie the same way again.

One of the coolest perks to the Come&Gone Sponge is that they’re convenient; they are both compact and disposable.

So for you adventurous dirty birds out there, just THINK of the places you could be getting it on without having to worry about a messy, involved clean-up afterward.

(You can think about those places, people- just don’t tell me, because some of you probably love getting your freak on in some “interesting” locales…. just saying…)

They even suggest that their sponges make great “stocking stuffers” for the upcoming holidays, so again, Come&Gone…. WELL PLAYED.

It’s time to ditch the towel. No more soggy underwear; we deserve better! If you’re looking to simplify your post-sex sloppiness, check out Come&Gone’s website today!