Filter Free Parents
Home Parents Reporter Is Smacked On The Butt While Doing A Live Broadcast, But...

Too many women have #MeToo stories to share; there have been countless stories of sexual harassment and/or molestation that women have finally felt the courage to share publicly. The purpose of the movement is to empower women to say: it’s NOT acceptable for men to harass women.

Too many women have been groped, touched, molested, or assaulted by men. #TimesUp, as the hashtag says, for this kind of gross, misogynistic behavior to continue.

But despite the scores of #MeToo stories, some men still seem to think that it’s acceptable to sexually harass women.

In public. On camera, even.

A female reporter was in the midst of a live broadcast at a local race when a male runner came up behind her and smacked her buttocks.

Alex Bozarjian is a reporter for Georgia news station WSAV-TV, and she was reporting on-location at the Enmarket Savannah Bridge Run.

Several race contestants were excited to mug for the camera; a lot of runners waved, some said “hello!” and others smiled as they jogged past.

But there was one (isn’t there always one??) that took it too far.

As Bozarjian continued to speak on camera, a race participant ran up behind her and smacked her ass.

Here’s our creep, coming up behind her. Thanks to WSAV’s editing, he has been highlighted for emphasis: 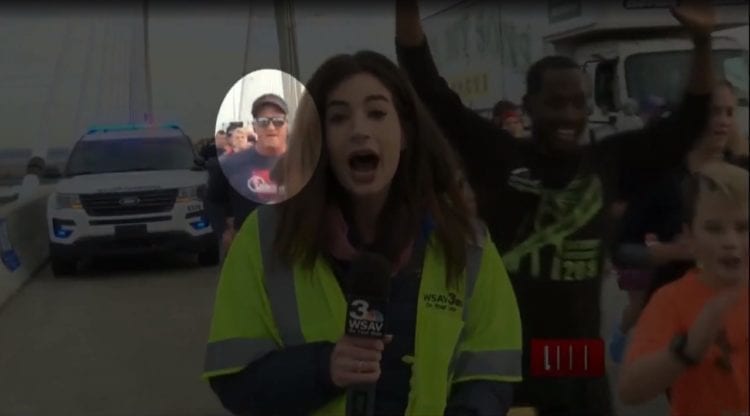 And HERE is the look on poor Alex Bozajian’s face the split-second after this guy smacked her: Not only was the smack unexpected and humiliating, but it was also apparently hard enough to actually hurt.

To her credit, Alex Bozarjian was able to recover her line of thought fairly quick to continue the broadcast, but it’s painfully obvious how upsetting the incident was.

Have you been there before? Has someone groped you unexpectedly? Too many of you can unfortunately say yes. Alex Bozarjian can as well.

But to add insult to injury, Bozarjian’s sexual harassment occurred while she was doing her job live, on-camera, witnessed by thousands of viewers.

But Bozarjian didn’t allow the anonymous creep get away with it, thankfully. She took to her Twitter account later that day to call him out publicly:

To the man who smacked my butt on live TV this morning: You violated, objectified, and embarrassed me. No woman should EVER have to put up with this at work or anywhere!! Do better. https://t.co/PRLXkBY5hn

(And thanks to Twitter user @GrrrlZilla, you can see the original clip of the incident.)

The video received 8 MILLION views, which clearly illustrates how outrageous this man’s behavior was.

Bozarjian’s description of the experience in her tweet is exactly what every woman who has been groped feels:

You violated, objectified, and embarrassed me.

And she’s 100% accurate. This man violated her body by putting his hands in places they were not allowed to be.

He objectified her as well: he saw a woman’s ass and decided to smack it. It didn’t matter who she was, how she might feel about it, or whether it was right or wrong to do.

Who she was & how she might feel never even entered his mind.

And he embarrassed her- of course he did. Alex was performing her job, focusing on speaking on live camera, and was suddenly jarred by a physical and emotional disturbance.

Her ass was touched -SMACKED- in front of thousands and thousands of people.

Bozarjian was made to feel small, an vulnerable, yet forced to continue doing her job as though nothing had happened.

Thankfully Alex Bozarjian spoke out about the incident.

Soon after news of the incident hit social media, her creeper was identified.

Thanks to Twitter sleuths, the offending runner was formally identified as Tommy Callaway of Statesboro, Georgia.

And since he had no problem showing his face on-camera while slapping a woman’s rear end, it’s refreshing to see his face making the rounds on the good old Internet….

And here’s the really pathetic part: Tommy works as a youth pastor. The same guy who felt it was appropriate to smack a stranger’s ass on the street is the same guy who is guiding teens to “making good choices”.

And he works with teen girls… feels a bit cringey now, doesn’t it?

Of course Callaway spoke publicly on the incident, appearing to be remorseful. When interviewed by Inside Edition, he stated:

i was caught up in the moment.

I was getting ready to bring my hands up and wave to the camera, to the audience, and there was a misjudgment in character and decision-making.

So basically, if you get caught up in “a moment”- of enthusiasm. Of lust. Of whatever you’d like to call it… that makes it ok to grope a woman?

DEFINITELY a misjudgment, on many levels.

After reviewing footage, the race committee has banned Callaway from participating. But in addition to his ban, Bozarjian contacted police with the footage, and the possibility of charges against Callaway are still possible.

As Alex Bozarjian explained it to Inside Edition, it doesn’t matter what Callaway’s motivation was:

“’ITS NOT OK TO HELP YOURSELF TO A WOMAN’S BODY JUST BECAUSE YOU FEEL LIKE IT. IT’S NOT PLAYFUL. HE HURT ME, BOTH PHYSICALLY AND EMOTIONALLY. “

Bozarjian’s unfortunately a member of the #MeToo club, a society that no woman willingly joins. But her decision to not tolerate this behavior from a man reminds the rest of us:

#TimesUp. No more touching someone’s body without their permission. Period.