A school bathroom is often the setting of all sorts of drama, teen angst, and shenanigans. But it can also be a place of desperate isolation- a spot for lonely, struggling students to escape with their thoughts.

One student was having a particularly rough time, and expressed her struggle in the form of a message scrawled on the bathroom wall.

It could have gone unnoticed, disregarded as typical bathroom wall graffiti.

Teens cry out for help in all sorts of ways, and some sadly go overlooked.

But not this time.

A message questioning life that was scrawled on a bathroom wall sparked an outpouring of love & support from fellow students in the form of a parade of Post-Its messages.

It all began with a single question. It was found on the wall of a girl’s bathroom at Golden High School in Denver, Colorado.

Scrawled onto the wall of the bathroom was the query:

When English teacher Ashley Ferraro noticed the writing, her initial reaction was: graffiti. But as she explained to News 4 CBS Denver,

We need to cover this up or erase it or get rid of it!’ and then I had the thought of, if we do that, are we ignoring the question and the person that asked it and the pain that they’re in.

It’s important to note: Colorado has one of the highest rates on teen suicide in the country. So Ferraro’s choice to take the writing seriously might have been the difference between life and death.

Ferraro offered her classes the chance to respond to the anonymous student’s question, in the form of Post-It notes.

Although the exercise was optional, Ferraro says that she was blown away by the sheer number of students who were eager to participate.

And their messages were those of hope, love, kindness, and support. 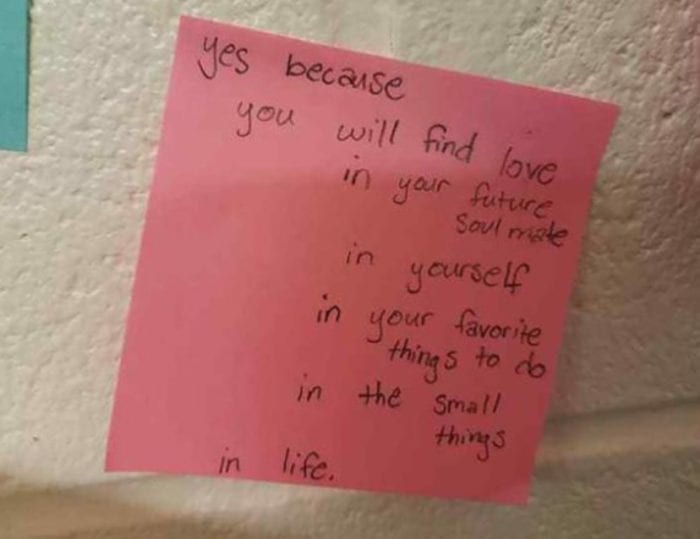 (How beautifully wise is this response, right??) 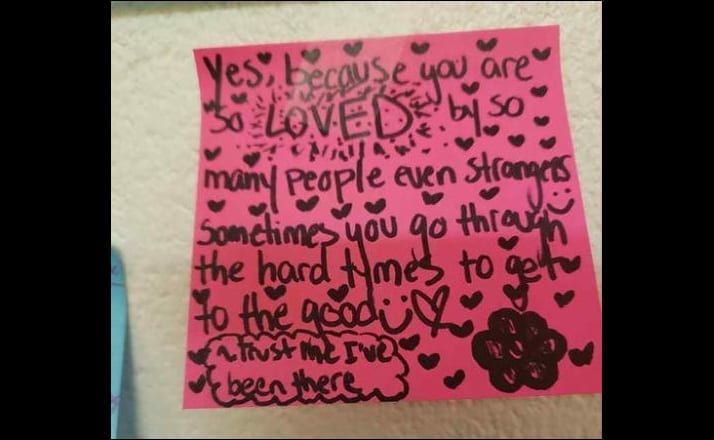 The “I’ve been there” is powerful. So many teens have been there, so no one should feel alone in their pain.

Students collaborated with Ferraro to place the Post-Its around the original question, surrounding their unknown peer’s struggle with messages of support.

Many of the messages went beyond simply answering the question, and spoke directly to the student, telling her:

There are people here who care about you.

There were so many Post-Its created that school officials are planning to move them to another wall within the main building so that the entire school can view the outpouring.

Teacher Ashley Ferraro admits that even she was surprised by just how many students were moved to participate; as she shared with CNN:

I was really impressed with how many kids participated.

And the ones you would never expect to participate… did.

The significance of the notes extends beyond supporting the original student, however. The Post-Its are a powerful reminder to every single student that he or she is NOT alone.

Ferraro told CNN that her hope is that the display will touch every teen that is struggling- even those that don’t vocalize it:

Some students have taken the Post-It support even further in trying to protect the mental health of their peers.

Sophomore Hannah Blackman was so touched by the love demonstrated that she created a fundraiser for Suicide Prevention and Crisis Services on her Facebook page:

It all started with a single anonymous question. And sometimes all it takes is a single message of support to life the spirit of someone who is hurting.

There were certainly many, many messages of support shared at Golden High School, but it would be wonderful if this example motivates other high school students to “post” their love & support for their peers.