Filter Free Parents
Home Mom Life Humor And Just Like That…Twitter Has BIG Feelings About The Sex And The...

In case you missed it, Sex And The City has returned after 17 loooong years. (Well, technically 11 years if you count the movies. Which we don’t).

And all the Gen-Xers and Geriatric Millennials rejoiced…for about a hot minute. Okay, maybe like the first 42.2 minutes.

The new chapter is currently streaming on HBO Max and features the characters we know and love (minus Samantha *insert sad emoji here*) as they navigate life now in their 50s.

Me watching the ‘And just like that’ #AndJustLikeThat #SATC pic.twitter.com/9s6dIWKcaz

Carrie and Big (aka John Preston) are living their happily ever after. And all the fans said, “Awwww.” Carrie dumped Samantha as her publicist, Samantha hightailed it to London, and Carrie is now co-hosting a podcast with “queer nonbinary Mexican-Irish diva” Che.

Big still has a nasty habit of smoking cigars and has become one of those hardcore Peloton devotees. Dammit, Allegra! (more on that later).

Miranda is back in university working on a Master’s degree in Human Rights. She also drinks. A lot.

Probably because she and husband Steve let their 17-year-old son have “sleepovers” with his girlfriend (which is code for noisy sex) and she’s regretting all of her life choices.

Oh I know they better not be looking to make my girl Miranda an alcoholic!!! Unacceptable!

No one needs bitsy von muffling we want Elizabeth taylor the dog that never died. #AndJustLikeThat

Oh, and the clothes and shoes are still fabulous.

‘And Just Like That’ debuted as the number one most-viewed series premiere of any new HBO or HBO Max series and I think it’s safe to say, it’s not exactly what fans were expecting.

How I pictured watching #JustLikeThat would go VS how it’s really going #HBOMax #SATC pic.twitter.com/Umj0LmnzbS

Diehard SATC fans have BIG feelings about the reboot. Really BIG. And they took to Twitter to share their hilarious and heartbreaking reactions.

(For those of you who haven’t watched it or have somehow managed to avoid the BIG bombshell up until now, stop reading. ***Major Spoilers Ahead***)

First, where oh where is Samantha? London, apparently.

And what’s up with Lily?? Why Lily, whyyyyy?

Look, we all know who’s fault it really is. And it’s not Lily’s. I’m looking at you Peloton.

Peloton on 8 Dec: Yay, we have a product placement on #AndJustLikeThat ?

So is the rest of the world.

Which brings us to the BIG elephant in the room so we might as well just talk about it. But first, shoes.

Not to mention, we waited 17 YEARS for this??

And it was this moment that had us all collectively screaming at our television sets:

OMG why isn’t she calling? Pick up the phone! It’s literally right beside you. PICK IT UP.” 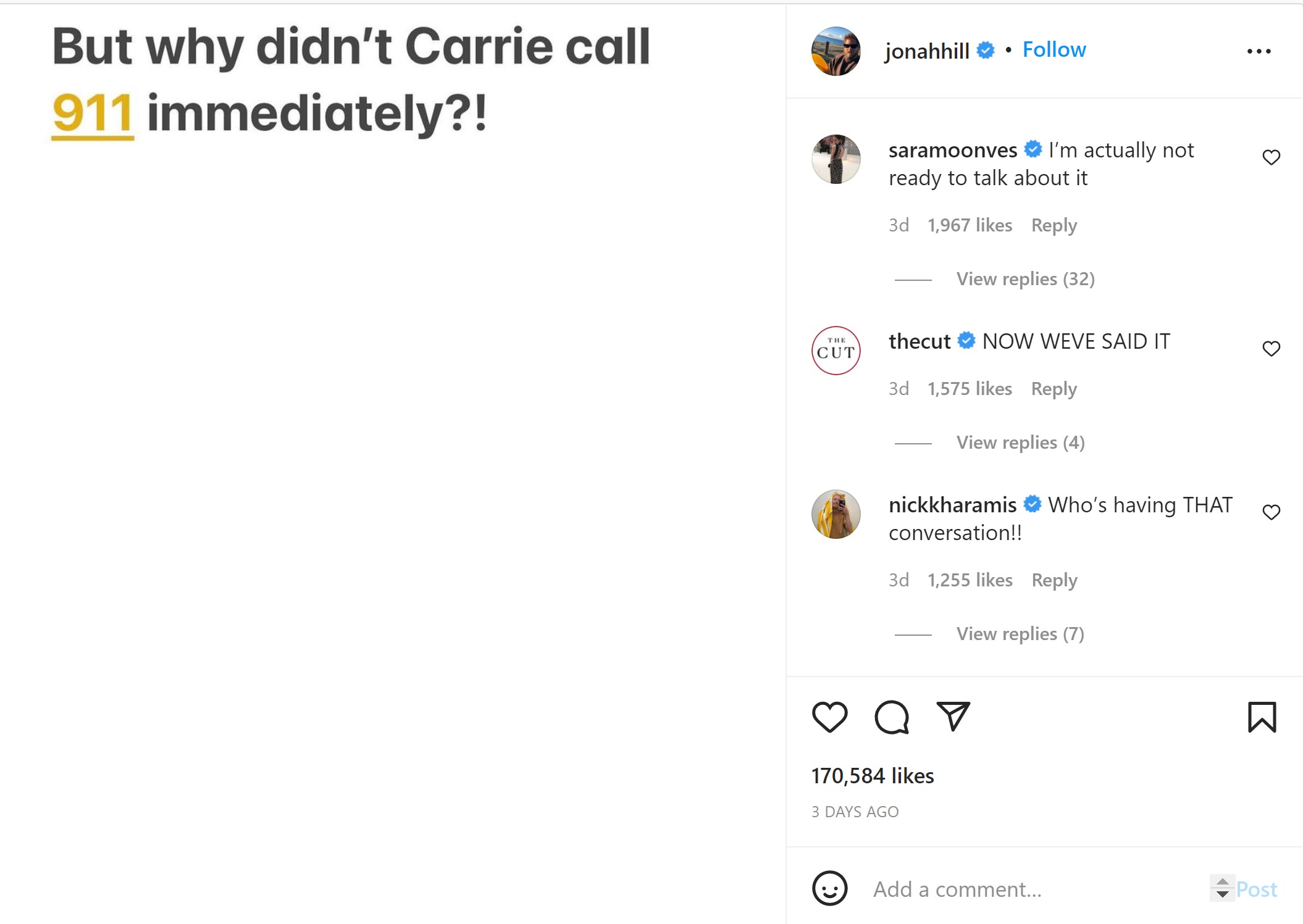 That’s what we ALL WANT TO KNOW.

‘And just like that, he died’ because I gave him no CPR or called an ambulance #JustLikeThat pic.twitter.com/Wh8sicXloq

None of us were ready David.

No I’m sorry I do not accept the ending of #AndJustLikeThat I DO NOT ACCEPT pic.twitter.com/zrf92oqSWR

And that’s how I looked after watching the first two episodes of #AndJustLikeThat pic.twitter.com/rUpuqbheWJ

Are you telling me after ALL these years, the only thing the writers could think of was to kill off Mr. Big in the first episode after a Peloton workout?!

This is the MOST disrespectful shit…

I haven’t been this mad over a show since Shonda killed McDreamy. #AndJustLikeThat pic.twitter.com/69kJw3bCB2 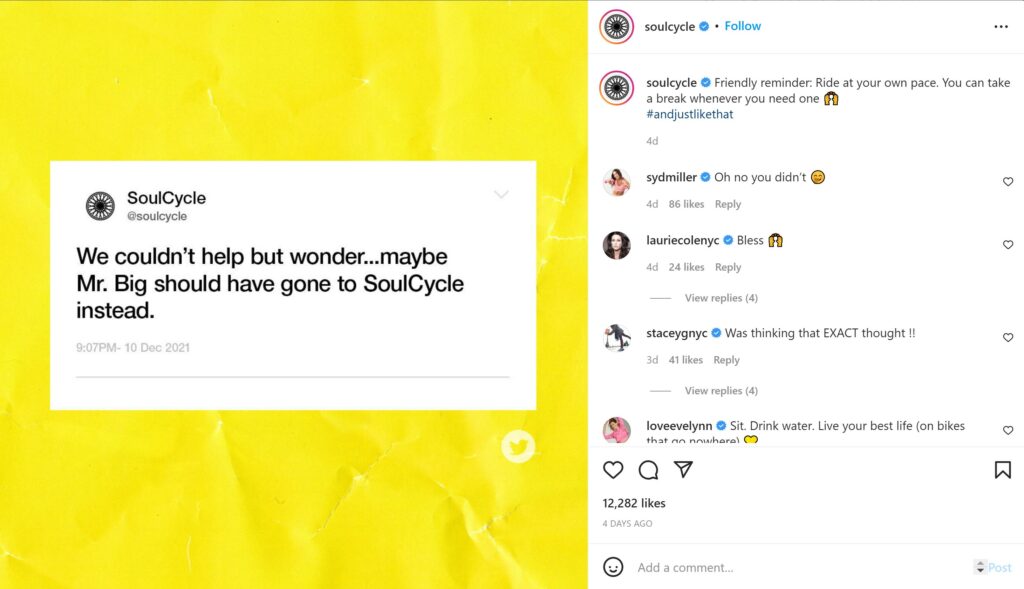 Not surprisingly, so did Peloton.

Peloton was faster with a response than Carrie was with dialing 911.

And just like that…Peloton responded to “that scene” with a hilarious new ad.

And while Big’s death is tragic, we would be remiss if we didn’t mention the real-life passing of Wille Garson during the filming of the show. Stanford, we were lucky to have you.

The saddest thing about #AndJustLikeThat is Stanford Blatch saying 'we are so lucky' when finding out Mr Big died. We love you Willie RIP xx

As for what happens next? We’ll just have to wait and see. ‘And Just Like That’ continues with new episodes every Thursday on HBO Max.

You can check out a teaser trailer for the next episodes here:

Are you ready for what's next? And Just Like That… the journey continues on HBO Max. @AndJustLikeThat pic.twitter.com/3lTdEI02x7


The Brokini Is The New Men’s …