Filter Free Parents
Home Kids “You Invite One Child, You Get All Of Us!” Mom Sparks Debate...

A lot of planning goes into making our kids’ special day well, special. From the cake and the decorations to the games and the invitations.

Because we want our kids to feel celebrated and loved, surrounded by family and friends. INCLUDING the family of their friends??

That is the question that has sparked a heated debate among parents online.

Jeena Wilder, a mom of 5 from South Carolina, took to both Instagram and TikTok to share that when one of her children is invited to a birthday party, the entire family goes.

That’s right, all of them. And it begs the question, when it comes to birthday party invites are you team all or no one at all?

She captions it with:

If one of your children is invited to a birthday party does that mean all of your kids can go?

I know that not everyone feel that way so I always make sure I spend a little bit more on the birthday gift than the average person would to make up for it.

Do you feel like just the child that got invited should go or the whole family?

The reel begins with Wilder receiving a birthday invitation and dancing and smiling for the camera. The words, “POV When you invite one of my children to a birthday party” flash across the screen.

As the screen caption changes to read “You invite one child you get all of us,” Wilder turns around and dances away.

She is quickly followed by 4 of her children trailing after her and her husband carrying their 5th child bringing up the rear. Her children range in age from 4 months to 9 years old.

The clip ends with the caption, “Don’t worry we bring awesome gifts.” 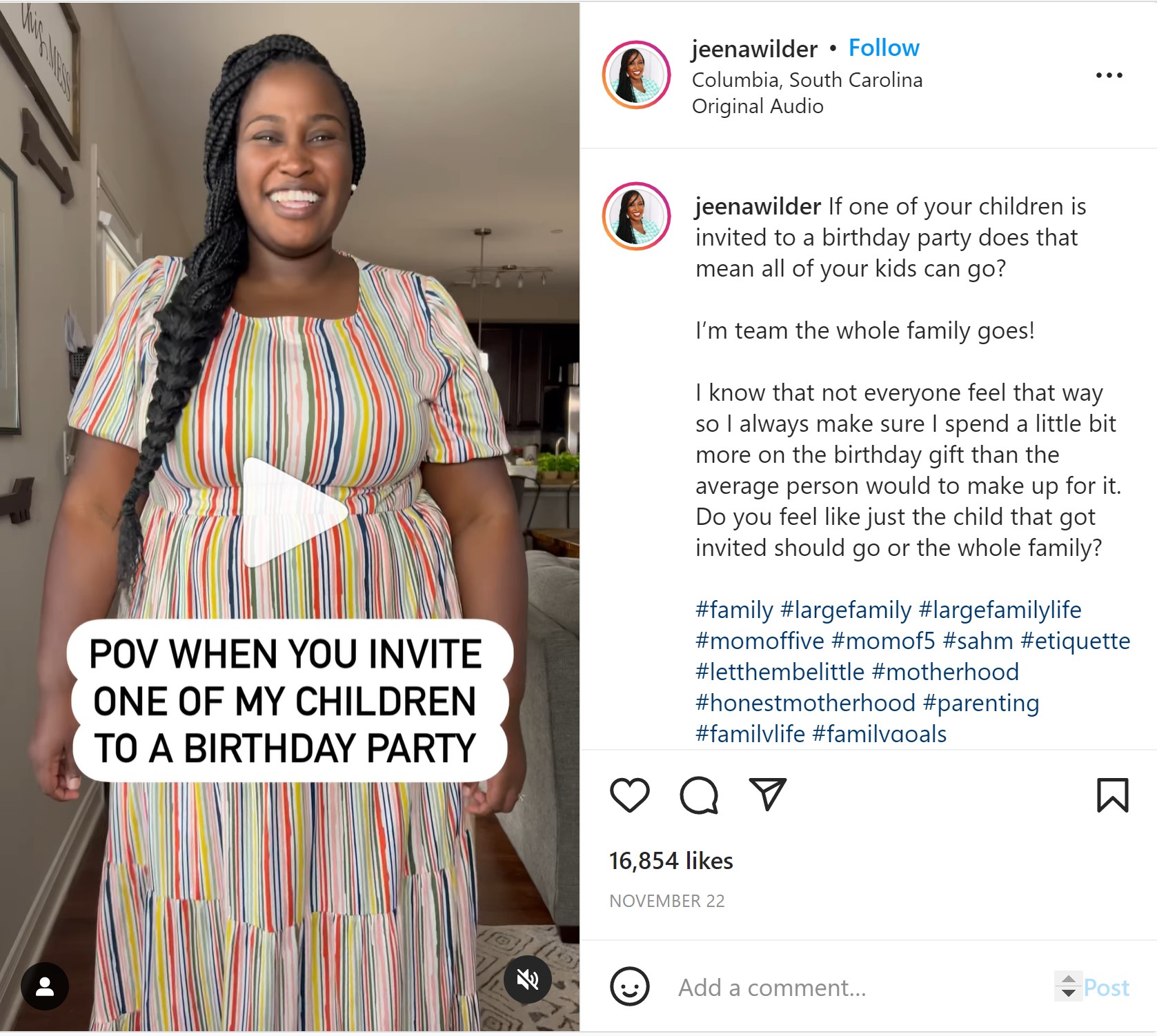 Some people agreed wholeheartedly and were “Team all.”

Even if they didn’t know this was a thing to begin with.

And when it comes to being the one throwing the party? Some people EXPECT the entire family to show up.

Others landed squarely on “Team only the one invited goes”.

And for good reason: 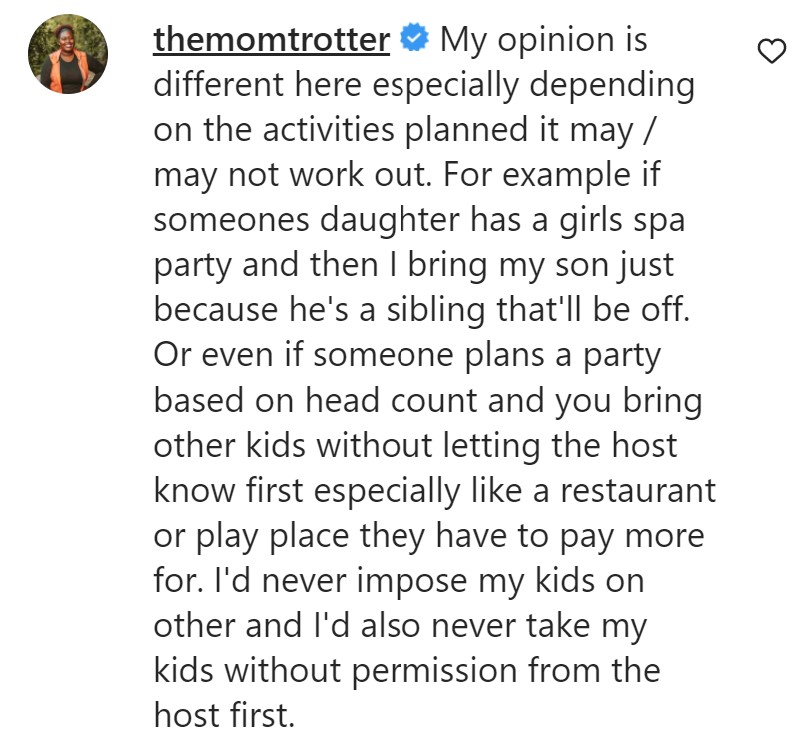 Also, just ask this mom who had this happen to her recently. She was NOT okay. 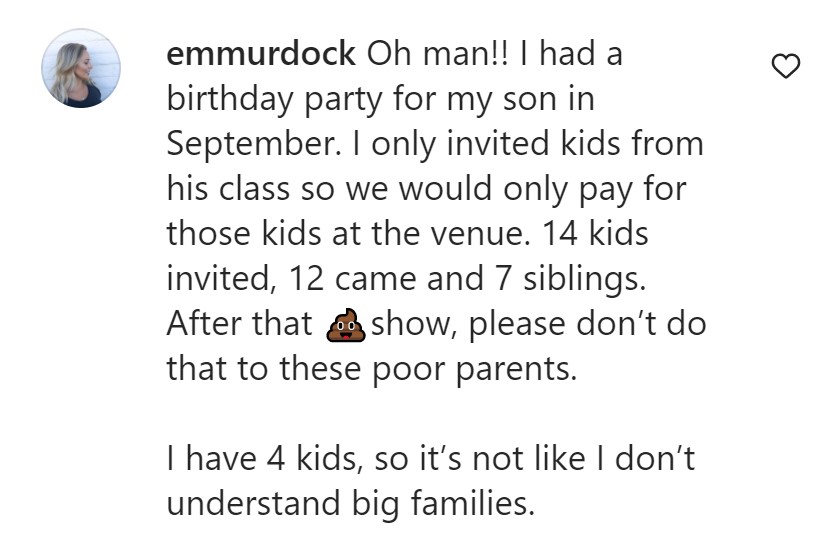 Wilder also shared the video on TikTok where her post has gone viral with over 900K views, 63K likes, and 5.9K comments.

She explains in the caption that her husband works a lot and she is solo with the kids.

In addition, she does, in fact, always RSVP OR asks the parents for permission.

Are you team just the invited child goes or team the whole family?!

My husband works a lot and most days it’s just me and the kids! I always RSVP or ask the parents first.

Are you team just the invited child goes or team the whole family?! My husband works a lot and most days it’s just me and the kids! I always RSVP or ask the parents first. #largefamily #family #parentsoftiktok #interracialcouple #birthdayparty

Comments on her TikTok were skewed heavily in favor of NOT bringing siblings to the party with the majority saying, “that’ll be a nope.”

If the invitee can’t go alone, no one should go.

In an interview with Buzzfeed, Wilder further clarifies her stance, explaining that she’s not comfortable dropping her kids off.

But she always asks first and pays for her own children if the party is at a venue.

I’m not okay with dropping my kids off at a birthday party solo. So, my solution is: I always ask beforehand if I can bring siblings to the party and always pay for the ones that weren’t invited if the party is at an event place.”

She goes on to explain that safety is definitely her main concern.

“If you don’t know the parents extremely well, why would you just drop your children at their home?

It’s the same reason why we don’t do sleepovers. You don’t know what goes on in other people’s households and you don’t want to expose your children to that.”

She also feels that culture does play a role. Growing up in a Haitian family, she explains that her family did everything together. And now, raising her own family, she’s raising them the same way.

“It’s how my parents and family members did it. You have a baby shower? The whole family goes.

Haitian are very family-oriented, so we just do things as a family.”

It’s obvious that people have very strong feelings about this topic and I get it. When your children are little the thought of dropping them off is daunting, particularly if you don’t know the parents.

However, as your kids get older, allowing your children independence is important too. You won’t always be there and learning to navigate these situations is an important part of growing up.

Not to mention, is an entire family showing up for a birthday party that only one of them was invited to really fair to the host? Probably not.

What do you say? Are you team all or no one at all? 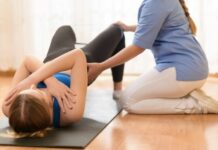 Pelvic Floor Physical Therapy: What Is It And Do You Need It?

Anyone who lives in the north resigns themselves to the fact that when winter hits, so does the snow. We … Read More