Filter Free Parents
Home Health + Wellness What’s A Proctologist Visit Like? My Ass Is A Survivor – And...

My kids have wreaked a whole lotta havoc on this crumbling temple of a body. My hips shine and glisten with stretch marks, my boobs make a charming slapping sound against my stomach (and thighs) when I bend over quickly, and we all know what happens when I sneeze without warning.

But one of the more, ahem, untold consequences of pregnancy and childbirth (and soaking up every moment I can on the toilet reading memes) has been waging war even farther south of the border.

In the years since every part of me swelled and popped and refused to return to its rightful place, my brown balloon knot has proven to be no different. That’s right – my butthole. My anus. The exit with no gift shop.

I have been battling hemorrhoids ever since kids passed through me, and finally they got to be too much to suffer suavely in silence.

There’s nothing sexy about a swollen butthole.

Trying to pass gas nonchalantly is already something that requires a great deal of concentration, but when you’re passing that hot gas through a swollen and raw bleeding Cheerio, it hurts like a mofo and sounds like you’re slowly letting the air out of a balloon. Everyone heard it. Everyone knows it was you.

And you’re crying because your turd cutter is on fire.

Anywho, once it got to the point that I couldn’t sit through a movie without having to stand up multiple times, lie on my side, and end up on all fours with my back end facing an oscillating fan – but, like, totally natural-looking, the kids never suspected a thing –  I finally admitted that I needed to see a doctor. 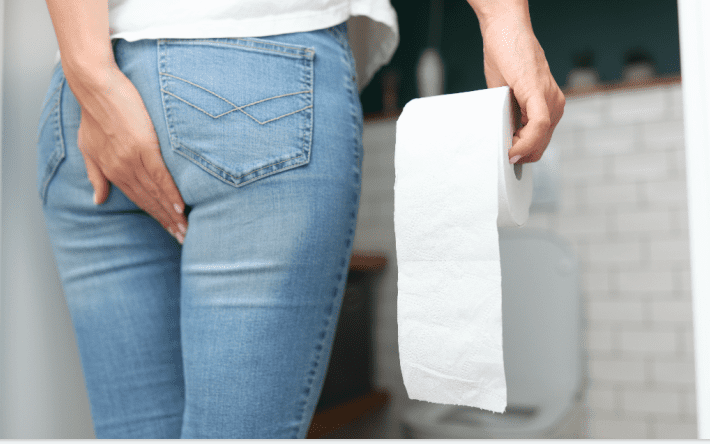 Listen. I’ve had hands inside my body before.

I’ve done the stirrup ‘n scoot routine dozens of times. My husband has seen my uterus outside of my body.

And what is up with how close eye doctors get?!

I badly needed relief, but the thought of a doctor, a professional person who attended graduate school and wore a white coat, looking me dead in my b hole just seemed humiliating.

In the past I’ve preferred male OB/GYNs, something about being more gentle with something you don’t have yourself, but in this case I really felt like I wanted a woman’s touch (and smaller fingers).

The day before my appointment, because this is how life works now, I started my period.

I really wish I were embellishing for effect. When I messaged the office to ask if I should reschedule the appointment “because of proximity” I was reassured not to worry because “it was a different hole”.

At least I knew this doctor went to a good medical school.

I arrived nervous, grateful for the face mask that hid my middle schooler blush of embarrassment. The waiting area smelled like Sephora and Chick Fil A which was odd, but I guess I hadn’t thought about what a proctologist’s office should smell like, so that worked.

I’d chosen an office two towns over to eliminate any possibility of being poked in the butt by anyone who had children in my kid’s classes or who might bring a dish to a future potluck I could end up attending.

My unfamiliarity with the area brought me not to a sterile medical building with a stoic, anonymous atmosphere, however, but to a strip mall, plopped right between the afore-mentioned Chick Fil A and a pie shop.

So if I saw someone I knew I could either be the lady getting her wrinkled penny tended to or I could pretend to be the fat lady who wandered into the wrong place looking for the pie shop. Win-win.

Music played loudly in the beautifully-appointed waiting area, possibly to enhance the feeling of a zen-like spa experience that the butt doctor was going for.

Except that there were no soothing strings or water droplets – there was Outkast, enthusiastically crooning, “I like the way you moooove.”

Not exactly mood music for when you’re about to bend over and show ’em what you’re workin’ with. I would have been much more comfortable hearing “Close your eyes, make a wish…”

Anyway, it was time for my exam. I was suddenly very aware of how I was dressed.

This woman was going to be face to face with the only part of myself I couldn’t see, why hadn’t I put more effort into dressing up? I’d thrown my hair up into a messy bun – for my messy buns?

I had scrubbed my swollen throne nearly raw, I mean, to make a good first impression, but it really felt like I should have at least worn some nice earrings. Something dangly, no hoops. Something tells me she sees enough holes.

I knelt onto a pillow in front of an exam table, which I had to then lay my stomach on and reach my arms across, as though in prayer at the altar of the anus. With my pants down. While on my period.

I joked that I felt like I was being hazed for rush week, and while her finger was circling my chocolate faucet the doctor joked that they had a wooden paddle she could use.

This put me in an awkward predicament, not just because my butthole is exposed and embraced, but because if I laugh, Andy Warhole back there will move and chomp on her finger, like a catfish when a redneck goes noodling.

And if I don’t laugh, then we’re just two awkward people kneeling in awkward silence forming an awkward connection via MySpace while a nurse awkwardly looks on.

I think I just said the word ha to avoid silence and a cannibalistic fannie.

“Yep, just like I thought, I can see a large fissure.”

So now not only has my dirty donut sprouted the grapes of wrath, but ol’ faithful has her own grand canyon that I get to rub cream on 4 times a day for 6 weeks.

And somehow my husband still wants me.

Take it from me – take care of your glory holes.

You think that poop chute isn’t much to think about until it’s all you can think about, so be sure to take your fiber, drink plenty of water, take stool softeners, don’t read novels on the toilet. And for the love of whatever god rules Uranus, schedule your appointments around your menstrual cycle.

Child Dies After Contracting B…