Moms have the uncanny ability to see things that no one else sees. Maybe we’re born with it. Or maybe it just evolves out of necessity when we become mothers.

Whichever it is, there are certain things that are invisible to the naked eyes of all of the other human beings that happen to live with us.

Things that EXIST but are only visible to us, apparently.

Like the dog’s empty water dish, or the crumbs on the counter, for example. Or the dirty dishes in the sink. Or the couch cushions haphazardly tossed and abandoned on the living room floor.

Or the small army of LEGO Minifigures, hair ties, and nerf bullets that take up residence in the middle of the kitchen island and then, like squatters, never seem to leave.

It all makes you start to wonder, does no one else SEE it? Really?

Sometimes we moms like to do little social experiments just to test our invisibility theory. We gather the countless number of “treasures” deserted by our beloveds in the most annoying places and put them on the stairs.

Hoping that here, where they are passed multiple times a day, they will FINALLY be noticed.

Spoiler alert: They are not.

Like the old saying goes, “If a tree falls in the forest and no one is around to hear it, does it make a sound?”

If a dirty sock falls on the bathroom floor but no one sees it, does it even exist?

Let me answer this one for you. YES. YES, IT DOES.

To prove it, one mom decided to run her own little sociological experiment involving a dirty sock, her daughter, and a bathroom floor.

And if you’re a mom, you know EXACTLY how this one is going to turn out. Or do you?

Xep Campbell posted a series of pictures to her Facebook page and they have quickly gone viral with over 8K likes and 31K shares. And once you see them, it’s obvious why.

She provided the following backstory:

On the evening of Thanksgiving when I went to bed I noticed one of Kestrel’s socks on the bathroom floor. I decided not to toss it in the hamper but instead see how long it would stay there, sort of a sociological experiment. 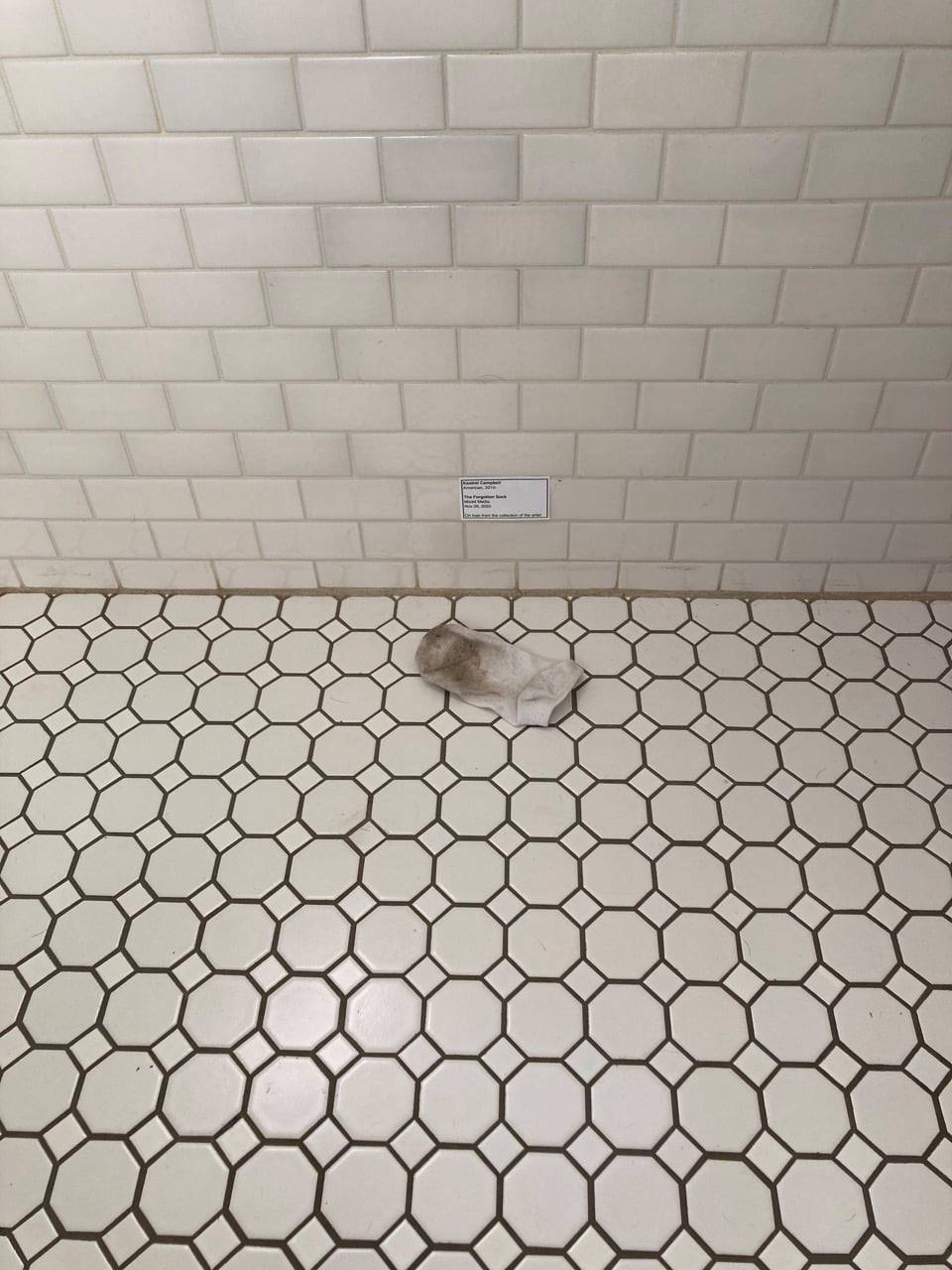 One could argue that the offending sock is somewhat camouflaged within its surroundings.

It’s possible (although HIGHLY unlikely) that it could go completely unnoticed once or twice. And so, Xep, being the good mom she is, decided to give her daughter, Kestrel, the benefit of the doubt.

However, as days turned into a week, and multiple trips to the bathroom resulted in utter nothingness as far as the sock was concerned, Xep’s confidence in her daughter waned.

She came to the conclusion that this was, in fact, intentional (or her daughter could really benefit from a trip to the optometrist).

Rather than do what most of us would do in this instance – IE: pick up the sock, Xep chose to take a different approach. And boy, are we glad she did.

Xep decided to treat it as a work of art, titling it “The Forgotten Sock,” hoping this would get her daughter’s attention.

She made up a label akin to what you would see in an art gallery; listing the artist’s name, nationality, birth, object title, media type, and date of creation.

The absolute best part tho? Listing where it came from: “On loan from the collection of the artist.”

Today, a week later, it remained, so I decided it must be intentional and deserved recognition as such. I made this little label hoping it would motivate her to pick it up.

The label got Kestrel’s attention all right. As for the motivation to pick it up? Yeah, that would be a nope.

Kestrel responded with her own take on properly displaying a piece of “art.”

She sent me a text message asking if I had done it. When I got home she said “I made a pedestal for it!” She gamed my shame.

That’s right folks, she made it a pedestal. Look, if a banana duct-taped to a wall can sell for $120,000 just imagine what this could be worth. They could be sitting on the next great piece of post-modern art.

Who are we to judge? 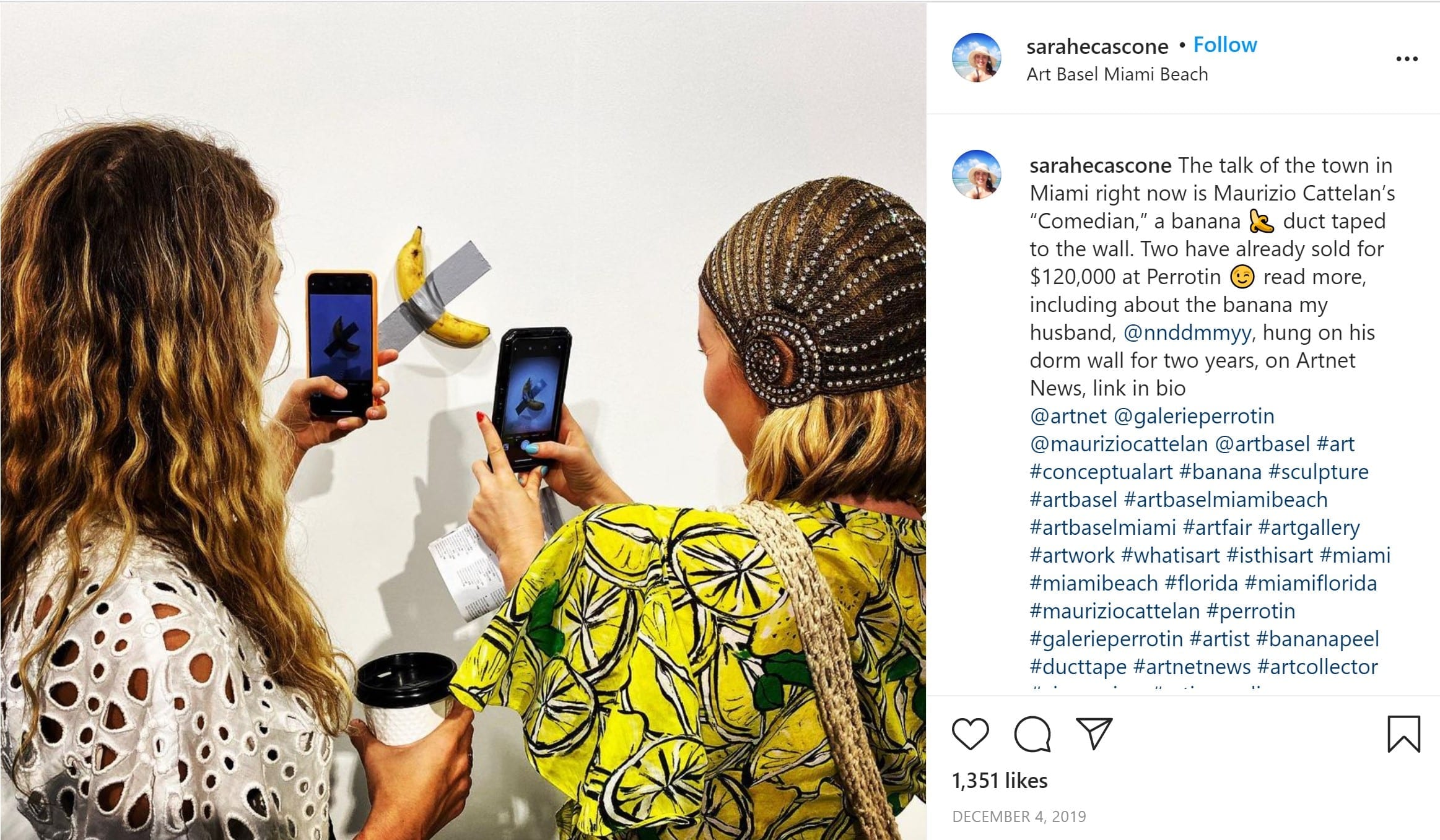 It’s at this juncture that we realize just what an amazing sense of humor Xep has.

Instead of forcing Kestrel to just pick up the sock already, she decided to play along. After all, is it really art without an audience to see it?

I figured as long as it was on display, it deserved an audience so the barnyard animals arrived. They find it very fascinating.

One commenter was quick to point out that this is the moment when the sock morphs from being merely a dirty sock left on the bathroom floor to becoming a virtual happening of a happening. 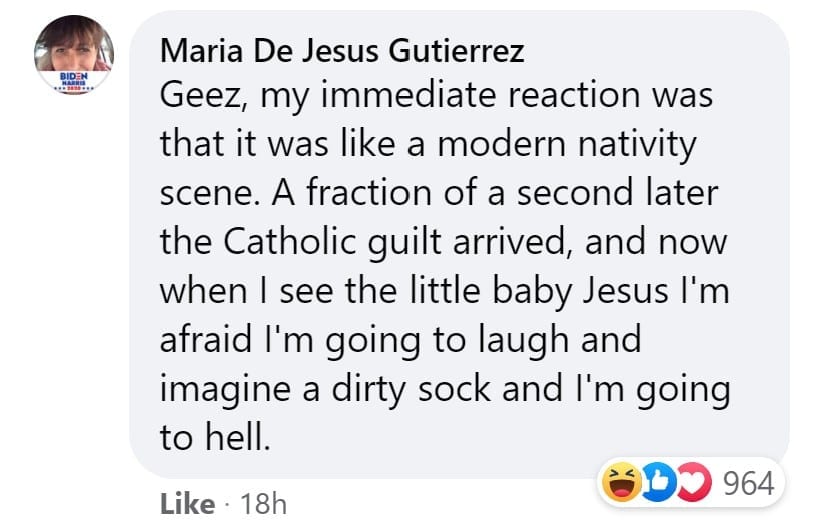 Clearly, it was just the inspiration Kestrel needed to connect with her inner artiste. That dirty sock in all its disgusting glory prompted her to create an entire art installation complete with a tiny replica of the Utah Monolith and a pencil sketch of “Flowers in a Vase.”

And as the exhibit grew, so did its audience. And as for that reference to the nativity scene? Xep and Kestrel took it to heart. And straight to the bathroom floor.

As for just how big this bathroom is and how long the exhibit may last? It’s anyone’s guess.

I should point out this is a *very small* bathroom. I asked when the sock might go away. She said “how long do art exhibits usually last?”

Of course, some people did have some helpful suggestions:

However long it lasts, one thing is for sure, “The Forgotten Sock” will NEVER, and I mean never, be forgotten.

Be sure to check out the original post HERE.

One of the fun things about social media is that no matter what you’re into, there’s some corner of the … Read More