Most pet owners know that animals have a way of getting themselves into some pretty bizarre situations sometimes. Like parenting, being a pet owner occasionally requires you to have to shake your head at your pet’s latest shenanigans, often with a muttered, “W…T..F???” and perhaps a call to your local veterinarian.

Or your local tree removal service.

We’ve all seen the cartoon & movie moments that depict a kitten trapped high up in a tree. And usually the fire department arrives on the scene, using a giant ladder to safely extricate the sweet kitty.

But in real life, sometimes a dramatic cat rescue calls for more than just mere mortal firemen. Sometimes you need a superhero.

(Or, a kind professional that happens to look like one, anyway.)

A Facebook post about a tree serviceman’s extraordinary effort in rescuing a cat is going viral- not so much for his heroic act, however, but for his “SUPER”-hero appearance.

Sharon Dawkin’s cat Buster managed to make his way up onto the highest branches of a nearby tree… with no way of getting himself down.

While cats are rumored to have nine lives, any attempt to jump from such a great height would surely result in Buster losing at least eight of those, so he was determined to stay right where he was.

And obviously Sharon wasn’t going to risk her own (one) life attempting to climb way up there, so she contacted Tanner’s Legendary Tree Service of Spartanburg, SC for assistance.

The tree company first sent out a nice young man named Noah, who despite valiant attempts, was unsuccessful in luring Buster from his sky-high perch:

Sharon was impressed with Noah’s demeanor & efforts, but clearly Buster’s rescue was going to require the big guns.

And the BIG GUNS (no, seriously, check out his biceps!) certainly arrived, in the form of this workman from Tanner’s:

This rugged employee explained to Sharon that he’d have to cut the limb Buster was resting on & gently lower it in order to safely bring the cat safely down.

I suspect Sharon’s response was something like, “Yes! Whatever you say, just YES!”

So tree dude harnessed up- and never did a harness look so good.

He made quick work of scaling up the tree, & I’m betting even Buster was less worried about the height & more impressed with the brawn heading his way:

And for those who were wondering why there’s so many pics of this superhero mid-climb & none of Buster, well, here you go: Buster.

The branch was carefully clipped, & Buster was safely lowered to the ground- mission accomplished.

And while Sharon was obviously thrilled that Buster was rescued from the tree, she was also very thrilled with the tree company’s MANPOWER.

…how’s the cat…what? What cat? I don’t see a cat in this pic… and that’s fine by me, because I can’t seem to take my eyes off of this perfect hunk of–

Although Sharon shared the story & pictures on her Facebook page in order to give props to the excellent service from Tanner’s Legendary Tree Service, the commenters found the RESCUER far more “legendary” than the rescue.

Not all superheroes wear capes.

My cat is down thanks to Tanner’s Legendary Tree Service. I am so very thankful for these guys. Very professional, friendly and compassionate.

Sure, they were professional, friendly, and compassionate, but… people were less focused on Buster and more focused on the “superhero”. 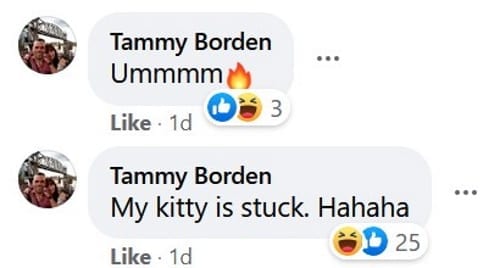 Ummm, yeah. Mine too, Mr. Buff-Tree-Man. We could use a good pus- never mind, I won’t say it. (But you’re thinking it right along with me, you dirty birds!)

Suddenly dog people are seeing the perks of being a “cat person”. And you’re right, Jo Ann; he does have an Aqua Man-vibe going here…

…and Steve concurs. (Whether it was said it envy or admiration, we’ll never know.)

The resemblance to Aqua Man is clearly evident; the character being played in the film by the very handsome, very rugged: 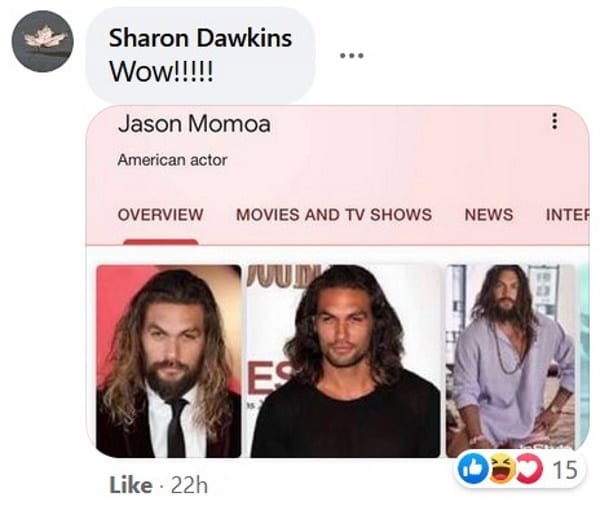 Yup. JASON MOMOA. (And I bet Tree Dude is just as dexterous with a hair scrunchie as Mr. Momoa.)

Right?! No cape necessary here- he’s just FINE without one.

But there was one question that was clearly weighing on everyone’s mind.

Can you imagine deliberately putting one of your cats high into a tree just to get this Climbing God to appear? (Yes. Yes, I can.)

Forget ONE cat- the more, the merrier:

Same, girl- SAME. I have two indoor cats that I never allow to go outside, but I’d be willing to make an exception in this case. And just might point them in the direction of our tallest tree.

And Sharon’s son Jacob was a little suspicious, too:

Oh, and for the 1% of you who were focused less on Tree Hunk and more on Buster’s fate, he’s fine: 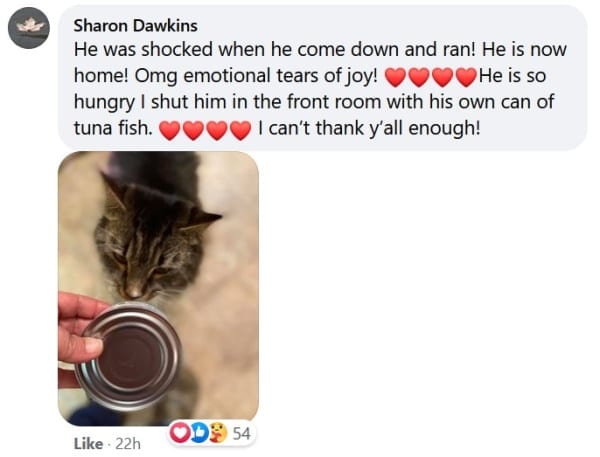 While Sharon is clearly thankful for Tanner’s Legendary Tree Service in their rescue of Buster, the Internet is thankful that Sharon was on hand to visually capture the RESCUER in action.

Therapist Shares, “You A…


In One School, More Than Two Dozen …

Teacher Writes “WTF is this?&…