When my kids were younger, playdates saved me—really freaking saved me.

While experts say that playdates are great for kids because they get to practice their social skills, I think they’re also necessary for the moms.

You see, moms need the ability to vent, share their sob stories, and just be each other’s support system.

Because when your kids are little, shit hits the fan every single day. And as moms, we just need each other to help make things feel less messy.

Luckily, I had a handful of friends who were also stay-at-home-moms at the same time I was. Weekly, I knew I had to plan at least one playdate to help preserve my sanity. So, either I’d pack up the kids and the car or my friend and her kids would trek over to my house.

Our homes were always very welcoming—and messy. Toys were strewn on the floor, goldfish were smashed into the couch cushions, and skid marks sat in the toilets (don’t judge us).

And the moms? Well, we adorned ourselves with hoodies caked with spit-up on them, and wearing day-old underwear (You know you do that, too).

There was zero pretending because as mothers we knew we HAD to keep it real.

If you have to put on that shiny “I’m Pinterest perfect” face or clean your freaking home, then move on, sisters. Get yourself some friends can you just be yourself with—because THAT is where the magic happens.

Each playdate seemed to start the same. We’d launch the kids onto the floor where they’d dump out toys, then they’d fight over the same one, and we’d have to play referee. But after the kids grew comfortable (and ate snacks, of course), everyone was able to relax.

And the moms were finally able to talk—really talk. 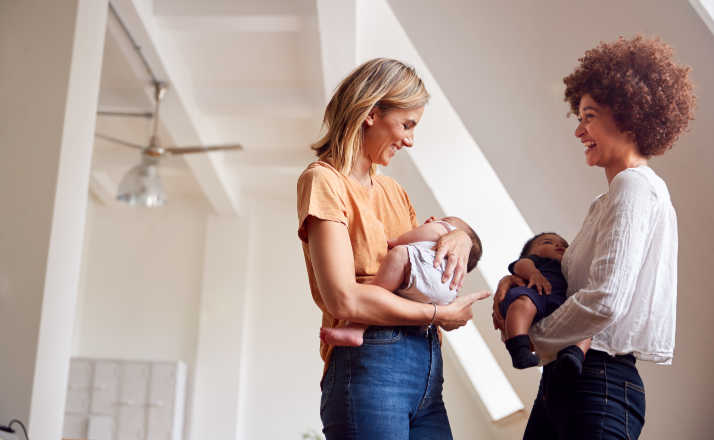 Because I was born with a rare disorder known as Diarrhea of the Mouth, I typically started. Talking with my mom friends on a playdate began to feel like confession. Only, my friends just nodded and supported me instead of furrowing their brows judging me. Thank, God (pun intended).

So, I’d open my mouth and out would come any guilt I needed to get off my chest. “I rage-purged the kids toys today,” “I screamed in my kids’ face at bedtime last night,” or “I locked myself in the bathroom to cry because I felt so overwhelmed.” All topics were fair game.

My friends would take their turn next, and I hope they felt that it was as freeing as I did.

Because motherhood can make you feel on top of the freaking mountain one minute, and then full of shame the next. But there’s something about announcing your flaws openly to another mom and getting her reassurance that she has had her own shitty moments, too.

It makes you feel a hell of a lot better about this whole guilt business.

As the playdates ended and we said our good-byes, we always hugged and exhaled all of our faults—leaving them there, and out in the open.

But at the same time, not dwelling on them anymore, either. Did our kids gain some social skills during those playdates? Who the hell knows?

But what I do know is that the moms felt better after because we had the opportunity to be raw and open with each other in the throes of motherhood.

And that, is something I will eternally be grateful for.

The last few weeks have been an emotional roller coaster of fear, anger, binge snacking, staring at walls, and crying … Read More