If you’re in a committed relationship and you want to know whether or not you’re both ready to take things to the next level, just ask your boyfriend to run to the store for something he doesn’t normally shop for and see what happens. The results will tell you all you need to know about whether or not your relationship will stand the test of time.

If, for instance, the man in your life comes back with everything you put on a grocery list and you didn’t receive a phone call or text, you need to put a ring on it immediately. Don’t wait for him to ask you. Change your relationship status on Facebook to married and lock that man down because he is a diamond in the rough.

Unless of course your boyfriend’s incessant phone calls or texts lead to making you snort laugh while you attempt to direct him to the right aisle, then he’s a keeper because it’s important to have a partner who can make you laugh, too.

Laughter in a relationship is as important as being able to locate the tampons. Or in this woman’s case, the black leggings.

In what is now a viral post on twitter, Taylor-Anne Gallagher, shared a series of texts she received from her boyfriend, Tim, after she innocently asked him to grab her a pair of black leggings while he was out shopping.

Tim hilariously and dramatically recorded his struggles to find this simple pair of black leggings, which ultimately proved to be a tremendously difficult task.

That’s right, poor Tim got to experience what it’s like to be a woman shopping for literally any article of clothing.

In one text Tim wrote: “There’s so many types of leggings. Why? For what reason?” I wish I knew the answer, Tim.

It’s no wonder we can’t decide what we want. We literally have too many choices to contemplate as women, which usually results in stress eating and eventual hyperventilation, at least it does for me. 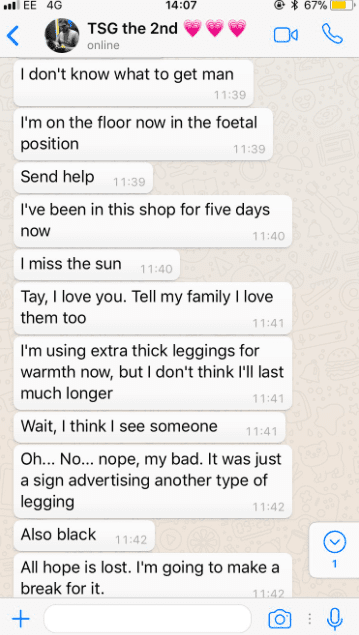 In a moment of utter defeat Tim wrote “I don’t know what to get man. I’m on the floor in the fetal position.”

Don’t worry, Tim, most women want to crawl into the fetal position when they’re shopping. Though usually it’s bra shopping that results in us losing our will to go on, jeans and bathing suits have also been known to break us.

Thanks for giving the internet a laugh! And, Taylor, he seems like a keeper.


Toddler Rescued By Strangers At The…

It’s no secret that every.single.blessed.month, women endure the pain and discomfort of getting their periods. The cramping, the backaches, the … Read More