Filter Free Parents
Home Kids Elementary You Don’t Need To Talk Politics With Your Kids
Hey. Hey you. Yes, you. I have a question for you. Any idea WHY one of my eight-year old students told me this week that he (and I quote,) “hates Biden?”
Any idea why that might be?

Now to be fair, and to make sure this is NOT POLITICAL AT ALL –  I had a 10-year old student at recess last week call Trump a name that even I am not going to type on here. So, there’s a wealth of hatred going on.

I’m not asking a specific why-does-your-kid-hate-the-such-and-such-party-candidate, I’m asking WHY IN THE NAME OF THE GRASS THAT’S GREEN DOES YOUR KID – HAVE ANY REASON TO HATE A PRESIDENTIAL CANDIDATE?!?!

Did one of them run over their dog?? Like, then I might understand. Kids harbor a fierce amount of emotions for people who hurt their pets – I can see that would be a definite reason to chalk someone up on the I-hate-you list.
But…. other than that the only reason I can think of is that YOU, AS THEIR PARENT, ARE PROJECTING YOUR DISLIKES ONTO YOUR CHILD.

That, for those of you who seem wildly unaware, is when you have a conversation about heavy things (finances, your job stresses, the neighbor lady getting caught with a dude whose not her husband, and even – wait for it, your views on the political candidates) at a time when your kids are otherwise occupied.
Or better yet, not nearby at all.
To be honest, in the age of iPad babysitters and kids having headphones over their ears so they can hear their video 68% of the time that they are home, I would think that finding time for these weirdo things called adult conversations would be relatively easy.
Good grief when my kids were little my husband and I had to drive their butts around in the car until they fell asleep so we could manage a conversation that their freakin’ ultra-hearing wouldn’t pick up.
Listen – this isn’t a political post.
I treat politics like the Grinch and I wouldn’t touch that thing with a 39-and-a-half foot pole, so I don’t care if you’re Independent or Pro-life only or I’d rather-vote-for-Rainbow-Bright than what’s going on right now. I don’t care.
And I do understand that some of you (more like many, many, many of you) are exceedingly passionate about your views on your guy. You can be. Whatevs, man.

But I’m here to tell you, there are certain subjects that you can leave your kids out of. 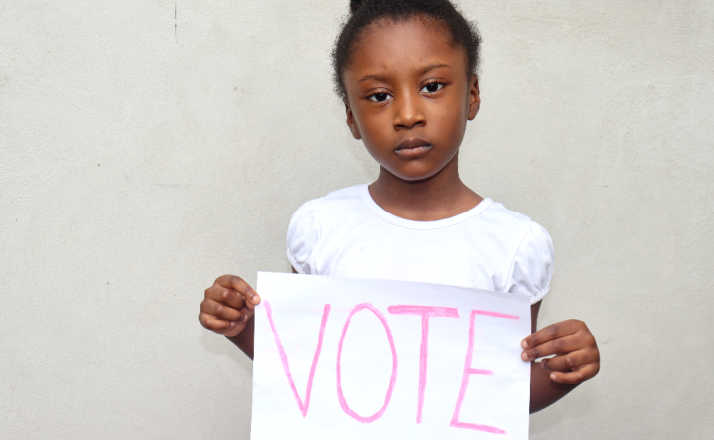 They don’t need to know. They’re not voting. They’re not legal to do so for a few more years. So why do you need to hand off the hater torch right now?
Can it wait? Until maybe they’re 17 or so? And then you can sit them down and have a good ol’ heart-to-in-this-house-we-vote _______________ heart discussion.
I mean, you shouldn’t. Technically, they should be able to make up their own mind about who they’re voting for without this discussion ever happening, but if, let’s say, you’re a giant ASS who feels the need to tell their child which way they SHOULD vote – could you maybe just hold off until such a day is slightly nearer?

There are some things you don’t need to burden your kids with;

Why Aunt Luella got more money after Grandpa died.
What that funny shaped toy is that the dog found under your bed.
Why your neighbor lady has a boyfriend young enough to be her kid.
What you think of “the other guy” running for President.
All these things – if your kid asks (I mean, kids are inquisitive, they might) – you can just treat them the same way you did the first time your kid asked where babies come from or why mommy doesn’t have a wee-wee.
Just give an uncomfortable laugh, and a brief explanation skirting the basics for an answer and then change the subject like your life depends on it.

You don’t need to talk politics with eight-year-olds.

You don’t need to pass on your torch of hate to a kid who just learned to tie a double-knot a year ago. Let them master a few more things (like adding fractions and shooting free throws) before they’re required to support your views.
This post originally appeared on Hoodlum Stew