I’m just recovering from a bout of Type A flu. By recovering, I mean I can sit up today. I’ve been down for nearly five days and in that time I’ve learned a few things about what it means to be Mom and to be sick.

First of all, this was a new and very painful lesson for me because, as we all know, Moms don’t get sick. Moms are superheroes who deflect germs. Germs bounce off of us while we laugh, “HA! HA! HA!” and go back to doing whatever amazing Mom Thing we were doing, like packing four different lunches while simultaneously folding 12 loads of laundry AND driving carpool. You know, regular things like that.

Every superhero has a nemesis, though, and this bug was mine. It snuck up on me; I never saw it coming. While I was laying on the couch hoping someone got the plate number of the truck that ran me down, I had some time to reflect on what I really needed from my friends and loved ones. You know, besides a cure. Don’t Believe the Lies. She’s a mom.When you call and ask what she needs, she’s going to say, “Oh, nothing. We’re all good here.” She’s. LYING. She’s so lying. She’s the Pinocchio of liars. She just accidentally hung up on you because her nose grew so fast it hit the END button on her cell phone. She is not at all good and she does need help, but she is a mom and can’t admit it. As a mother, she is hardwired to try to do everything herself. Get her back on the phone and boss her around a little. It’s what good friends do. Here are a few more ideas:

Take the Kids Away. Not just for an hour. That isn’t going to do it. She doesn’t want a nap. She doesn’t want to doze. She wants to take her codeine infused cough medicine and wake up next Tuesday. Come get these suddenly high energy, top volume, booger monkeys and don’t bring them back until she’s better. It is their fault Mom’s sick, anyway.

Text. If You Love Her At ALL Please Text! After that first call to check in and tell her you’re stealing the children, you’re good. She doesn’t want to talk. In fact, she can’t! She just coughed the equivalent of an Insanity ab workout. She can’t even breathe on her own. Send a text or an email. She will appreciate that you care and that you care enough not to make her use her last breath answering the phone. She’s too polite not to answer. Plus, she won’t have to unhook from the respirator.

Drive Her Carpool. All of those kids she has still have to go to all of the places. If you share any of that with her, please take her kids, too. Don’t make her leave the house with her pockets full of used up tissues and her eyes all weepy. There is no amount of make up in the world that will make her feel better about being seen like this. Odds are she won’t care at this point, but once she’s better she’ll remember running into EVERYONE SHE KNOWS while rocking raccoon eyes and 101 degree temp. YOU can spare her that agonizing memory. Load ‘em up and move ‘em out!

Feed Her Family. Her husband means well. He really does, but he’s working hard. They believe in working together and they share the load, but he doesn’t get to stop doing going to work because his beautiful bride is dying over here. So please, take pity on him, and the rest of them and bring green vegetables. He is going to make Mac and Cheese from the box four days in a row. With love. Dear Lord, please don’t let that happen.

Leave Supplies on the Porch. Chicken soup. Tissues. Cough drops. Jack, Jim, or Captain. Whatever. If it would make you feel better, it’ll probably make her feel better. Leave it right there by the front door. Don’t ring the bell, though. She’s sleeping. Someone just picked up the kids.

Remember, this is a fluke. It almost never happens. Moms don’t give in to weakness and we just don’t get sick, (that’s for Dads) but when we do we go big. So help a girl out. Give her what she really needs in the name of sisterhood and superheroes everywhere. 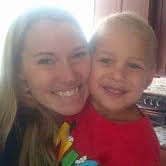