You know, just when I thought I could handle scrolling through the news, I get smacked in the eyeballs with a horrible story about monkeypox suddenly becoming a thing.

My first thought was, can we not have another damn pandemic, please?!

An outbreak of monkeypox has been detected in multiple countries over the last few days. It started with a handful of cases in Europe but those cases have since grown to more than 100. Countries include Portugal, Spain, the UK, Canada, and the US.

It has spread to several other countries as well. So, let’s break it down.

Is monkeypox a new virus?

No. The disease naturally occurs in monkeys and other animals and has been documented in humans who have close contact with infected animals. It’s been around for a long time.

When there are outbreaks, news reports usually say that there are fewer than 100 cases. It just isn’t a disease that has made it to pandemic levels in the past.

What are the symptoms?

According to the CDC, monkeypox is similar to smallpox but with milder symptoms.

The virus has an incubation period of 5 to 21 days but typically is seen as 7 to 14 days. The first set of symptoms include:

These symptoms are followed by a horrendous rash that will go through several gnarly stages before the rash falls off the skin.

Yes, you read that right. Those stages include:

The symptoms last for two to four weeks and in cases seen in Africa have had a death rate of 1 in 10.

How does monkeypox spread?

You may have read that monkeypox spreads through “sexual contact,” which is a rather misleading way to phrase it.

According to the CDC, monkeypox spreads through close contact, period.

If you get bitten or scratched by an infected animal or process meat with the virus in it then you are in close enough contact to get the disease, which is why there really aren’t many cases seen globally.

That said, scientists are giving this new round of monkeypox some pause because there are no clear indicators for why this is suddenly spreading independently in different countries.

Right now, some scientists are wondering if monkeypox might be spread through the respiratory system, similar to Covid.

Is there a vaccine for monkeypox?

No. However, if you are up to date on your regular vaccines and you got the smallpox vaccine then you are likely already safe since that vaccine is up to 85% effective against monkeypox.

Not yet, however there are some reasons why some experts are concerned.

This current spread of monkeypox does have the global medical community feeling pretty jumpy. In a series of tweets sent out by Dr. Eric Ding, an epidemiologist, health economist, and co-founder of The World Health Network, this monkeypox situation is definitely concerning. 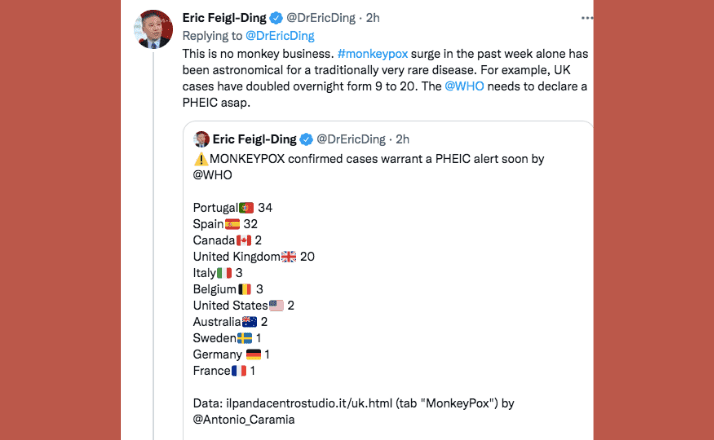 “This is no monkey business. #monkeypox surge in the past week alone has been astronomical for a traditionally very rare disease. For example, UK cases have doubled overnight from 9 to 20. The @WHO needs to declare a PHEIC asap.”

PHEIC refers to the Public Health Emergency of International Concern, which is when the World Health Organization (WHO) takes a closer look at a growing medical concern. According to Reuters, the WHO is planning to meet today to how serious the sudden global spike in cases of monkeypox is.

What do I do if I think I have monkeypox?

The best you can do is get to a doctor for a diagnosis and to learn how to manage the infection. According to the CDC, there is no safe, effective treatment for monkeypox beyond waiting the symptoms out.

To prevent the spread of monkeypox, the CDC says that vaccines, antivirals, and vaccinia immune globulin (VIG) can be used.

What do I do to prevent it?

Since we don’t really know where it is coming from or why it is popping up all over the globe simultaneously and independently, there is some concern that it could now have airborne transmission, which is counter to how it has traditionally been spread.

A few steps you can do to keep yourself safe include some things that we’ve all been doing a lot of anyway. Those include:

I don’t know about you guys, but I am super ready to Rip Van Winkle my way through the rest of the 2020s. Stay safe out there, everyone.

The act of childbirth is a highly unique experience; there are a lot of variables that go into bringing a … Read More