The Christmas countdown has begun, and like most parents, I’m scrambling to tackle my gift shopping list in time- and don’t even get me started on the damn elf I naively thought would be “holiday fun”!

And then there’s the proverbial “picture with Santa“. It’s almost a (slightly terrifying) rite of passage as a kid. Let’s face it; the best photos are the ones where the kid is not having it when it comes to sitting with Santa.

Well, if kids thought taking a snapshot with Jolly St. Nick was a little freaky, wait until they get a load of what’s in store for THIS year’s holiday photo shoot: a Christmas picture with the Dark Lord himself!

A newspaper advertisement in Comox Valley, British Columbia, detailed a fun upcoming Courtenay Christmas Parade that offered fun, Christmas crafts, and the chance for your child to take pictures with SATAN. 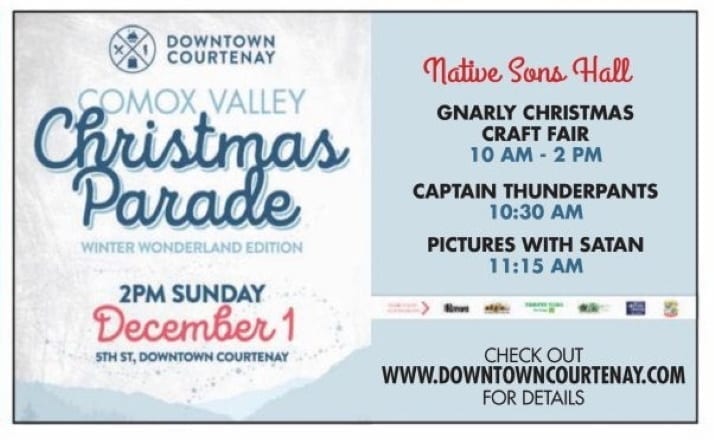 Why is the craft fair so gnarly?? What the hell is Captain Thunderpants doing at a holiday fair in the first place? And why is he getting top billing over pictures with Sata- Santa. I mean, SANTA.

I’m not sure who’s idea it was to feature pics with the devil himself, but if I can barely get my nervous kid to pop a squat on Santa’s lap, I’m thinking trying the same with the Ruler of Hell is going to be a hard pass.

But fortunately for all of our souls, Satan’s not making an appearance at the Courtenay Christmas Parade after all- which is a shame since the craft fair was promised to be “gnarly”.

It turns out that Satan was never really invited to this swanky holiday photo opp in the first place;  it was merely a typo.

And the Comox Valley Record was quick to address their embarrassing error, stating in an apologetic editorial:

There is no excuse for it, and we aren’t about to use this space to make any.

Somehow, this was missed, and for that, we sincerely apologize – to the clients affected, as well as to any readers offended by the mistake.

Were some readers offended that Satan was potentially available for some hellish pre-holiday photos with the kiddos? Sure.

But social media loves a good typo, & when Twitter user Nicholas M. Pescod posted a photo of the ad typo, out poured the floodgates of… “observations”.

Well this is awkward. pic.twitter.com/yDwTqQs4G9

But as far as Satan potentially showing up for pics, well, Twitter was more than happy to jump all over that, & turn it into comedic gold:

I should go. My gran always told me that I would meet him

Could it be…. SATAN? (Apparently, it was SANTA, but the spelling is awfully similar…)

After a Gnarly Craft session and Captain Thunderpants, you really must end on a high note.

They do promise a high-octane morning, so I guess they want to end with some major hellfire!!

Silly fools, it’s “Captain Underpants”! Anyway, I sure hope the lines for Satan aren’t too long.

So there’s a Captain THUNDERpants band? What about Captain Underpants?? What is this dark magic????

Yeah, seriously. This guy could be way scarier than Satan… just saying…

Some are just not feeling the pictures with Satan/Santa/WHOEVER.

Disappointed Satanists show up and learn they’re just getting photos with Santa instead.

While the kids might be relieved that it was a typo, some fair-goers might be pretty disappointed.

Obviously the typo was properly addressed and clarified, but it’s a typical example of how the simplest of typographical errors- a simple letter or two misplaced- can lead to dramatically different results.

(And serve for a load of social media amusement.)

Twitter user @theslimdude summed up it up quite well:

The devil is in the details.

(Thankfully, not at the Courtenay Christmas Fair, anyway!)

A Student’s Cry For Help…