The holidays are rapidly approaching, and for many parents, the Christmas gift shopping has begun!

(Well, maybe some of you are already tackling your shopping lists, but I tend to approach holiday shopping like college finals week: late nights, massive carb consumption, & the panic of knowing I should have started much sooner.)

For kids, writing out their Christmas list is an exciting event; other than their birthdays, it’s a chance for them to finally net the things they’ve been pining for all year long.

And for some kids, their approach to making a Christmas list is GO BIG OR GO HOME.

One 10-year-old definitely took the BIG approach in writing out her Christmas list this year, & it’s gone viral after her bewildered dad posted it on Twitter.

Like most parents, Twitter user @A_Johnson412 was recently handed a Christmas list by his 10-year-old daughter. And like most parents, he likely expected to see perhaps one or two big-ticket items, noted with several other reasonable items.

But his daughter had other ideas. Bigger ideas.

My 10 year old daughter must be out of her mind with this Christmas list ??? pic.twitter.com/Qqsje79rda

Girlfriend clearly had a plan here. Her list is neat, well organized, & the hearts on top are a nice touch, no?

She clearly starts with her “must-have” gifts: we’re talking tech.

But any 10-year-old needs a break from all that technology, so she’s more than happy to take a break from her Mac Book to play with a bunny.

Not just any bunny, though, Dad:

A real one; none of that stuffed animal crap!

Our ambitious gift-lister included some generic items: clothes, makeup, a hydroflask (ala VSCO!), and a purse.

But not just any purse. We’re talking Chanel.

Our girl likes the finer things!

Like a typical 10-year-old girl, she then requests some toys, shoes, earrings, and LOL dolls.

(Oh, and a GoPro Camera. Probably to film videos for her YouTube channel, because this girl’s definitely going places!)

But the best item on the list was tucked discreetly further down the list, buried amidst the pink duct tape and the slime-making ingredients:

$4K!!! I’m not sure where she came up with that precise sum, but a girl needs some spending money, am I right? I like that it’s sandwiched between the “LOL Doll Camper” and “clothes for bunny”, too.

(You remember the bunny from earlier. Obviously since it’s real it’s going to need it’s own wardrobe, so…)

This is quite the Christmas list, huh? Twitter found it equally fascinating, too, and readily shared their thoughts on it.

Our little diva is clearly versatile!

An alarm clock, Gucci slides and some laundry detergent? Mama has range and her priorities in check!

But some are convinced that she’s got plans. BIG plans. 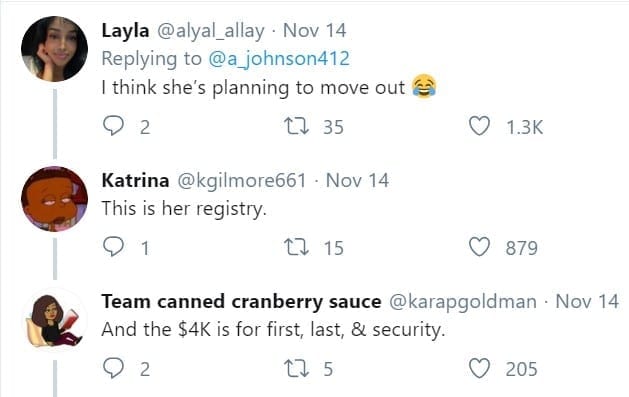 (Maybe she & her real bunny are moving out? She did include “new shets and covers” on her Christmas list, too, so… keep an eye on her, Dad! And the bunny, too.)

…Or maybe dad could just…

Some don’t object to her big-ticket demands, but think her technique needs work:

Nahh she did this all wrong some of this stuff on here she could get any time (diy slime kit, sheet set, clothes, DUCT TAPE??)…she’s gonna have to learn to leave that stuff off the list to save room for the big stuff she REALLY wants ?

While others admired her… attention to detail(?)

She really re thought it out and was like wait the bunny needs clothes ?

But most of us simply can’t wait to see what will actually happen for our ambitious girl here. We want updates, @A_Johnson412! What’s baby girl actually getting this year??

Although she will likely be too excited from anticipation to sleep on Christmas Eve:

Her going to sleep on dec 24th because she expect great things in the morning pic.twitter.com/Dwd7EHjFfR

Her on Christmas when she gets none of that pic.twitter.com/Nmwac8XNdn

But regardless of what our amusing 10-year-old gets for Christmas, her huge holiday gift list is a fun gift for those of us on social media. And with the post already earning 25.6K retweets and 130.5K likes, it’s clearly the gift that keeps on giving!