For the past few weeks, I have largely ignored the battle royale brewing over on TikTok between Gen Z and the Millenials.

You know the one: where Gen Z is calling out “The Olds” for their skinny jeans and side parts.

i don’t think i can ever go back. skinny jeans are still cute tho #swag

Dragging elder Millenials for broadcasting just how ancient we really are with the jeans we wear and the way we style our hair.

? middle parts are back apparently – Speedforcecosplay

Some TikTokers have gone so far as to say that they would choose homelessness and even death (which is a wee bit dramatic, don’t you think?) over wearing skinny jeans, they are THAT horrifying. 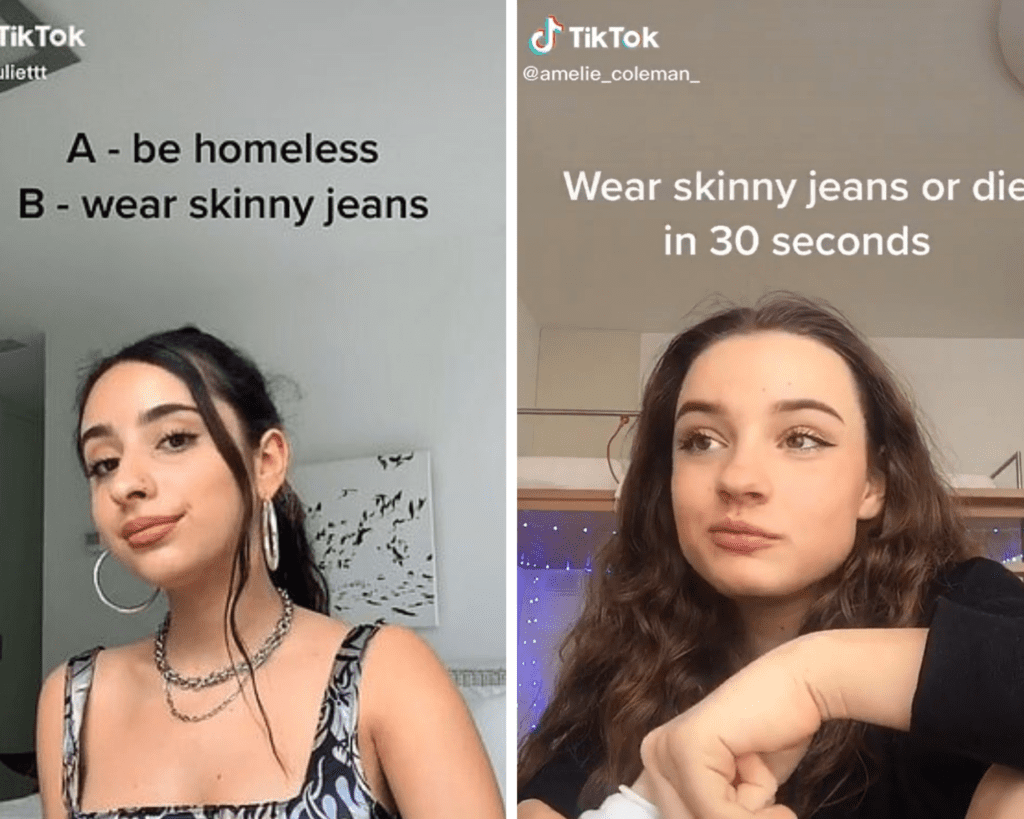 It seems, in all their years of worldly wisdom, (bahahahahaha) the Zoomers have deemed middle parts and mom jeans (I know, the irony) to be cool and thus it must be so.

Here’s the thing younglings. We have BEEN THERE, DONE THAT. And we have the pics to prove it.

Middle parts? Uh, yeah. What Millenial among us doesn’t remember this??

Reading a lot about how Gen Z hates Millennials for our dumb side parts, as if middle parts were not a key part of our Proud Millennial Heritage pic.twitter.com/bG0AfjtdJT

And as for baggy jeans?

I mean, cooooome on. Hello, JNCO Jeans from 1996. (Do the math. Even common core will tell you that’s 25 years ago baby zooms. You were barely even born.)

We KNOW a little something about baggy jeans. We lived it. And eventually, we evolved and became smart enough to dropkick those flares-out-to-there right into the fashion dumpster. May they RIP. FOREVER. Please.

All the “mod” styles you Gen-Zs are sporting today? We stole them from our ancestors, just like you are.

It’s the circle of life, fashion edition. But go ahead. Mock away. Because while you’re over there thinking you INVENTED middle parts and baggy jeans, we’re over here tweeting memes like this one:

When they say I can't wear skinny jeans anymore. ??? pic.twitter.com/3jTfSXd5Qe

And adding 5 cry-laughing emojis to EVERYTHING.

According to a recent article in CNN, entitled “Sorry Millenials, The ? Emoji Isn’t Cool Anymore,” it’s not just skinny jeans and side parts that the Zs are taking issue with. Nope. Now they’re hitting us where it really hurts. Right smack in our emoji-loving faces.

The beloved and most favored emoji of all time, officially dubbed “Face with Tears of Joy” is being dissed.

By a generation that shall forever be known for eating Tide Pods and saying “Sksksksksksk” no less.

It doesn’t matter that it is quite literally the most popular emoji evvvv-er and is tracking over 3 TRILLION Twitter uses to date on Emojitracker.

The under-25 crowd doesn’t like it, therefore, it is no longer worthy of a keystroke.

“I use everything but the laughing emoji. I stopped using it a while back because I saw older people using it, like my mom, my older siblings and just older people in general.”

And he’s not the only Gen-Z to feel this way.

CNN also reported that “seventeen-year-old Xavier Martin called the emoji “bland” and said “not too many people” his age use it.”

And as for twenty-one-year-old Stacy Thiru? She’s not a fan either:

“[Stacy] prefers the real crying emoji because it shows a more extreme emotion and feels more dramatic. She said she couldn’t even find the laughing crying emoji on her iPhone’s keyboard.”

Just in case you don’t think this is official enough, Emojipedia confirms the worst. In their blog post “What Happens in the TikTok Comments,” they say, and I quote:

It’s common wisdom on TikTok that the laughing crying emoji is for boomers. And by boomers I mean anyone over the age of 35.

Want to take a dip in the fountain of youth? The answer seems simple enough. Ditch the skinnies, part your hair in the middle, and say sayonara to the tears of joy emoji.

Or…just do what almost every other Millennial has chosen to do. Tell Gen-Z the “OldTok” shall not be shamed and we’re not giving up our skinny jean, side-parting, LOL-cry emoji-loving ways without a fight.

This message is for the Gen Zers:
Listen ya little so and sos, you aren’t so cool. You are repeating the absolute worst trends of the 90s. We’ve already been there. We’ve seen some things. And we aren’t giving up our side parts or our skinny jeans. WE ARE FIGHTING BACK.

And let’s face it, anyone who calls yoga pants “flared leggings” is questionable when it comes to their ability to dictate fashion.

Gen Z has spoken and they have said skinny jeans are out but I’m not sure i can take fashion advice from the group that called yoga pants flared leggings.

Besides, it doesn’t matter what you say, you can’t hurt us, zoomies…most of us were never really that cool anyway.

I love this trend of "ahaha, millennials, teens don't think you're cool." Teens didn't think I was cool when I was a teen, why would they start now.

Plus, we know a thing or two about cyberbullying. After all, we invented it.

Gen Z out here bullying millennials about our side parts and skinny jeans like we weren’t the ones who INVENTED cyber bullying in the first place.

You can’t hurt us, Brashlynn. WE’RE ALREADY DEAD INSIDE.

As for getting rid of those side parts? It ain’t happening.

AND LET ME PUT ON MY SKINNY JEANS, DAMNITTTTT. Lol. pic.twitter.com/4TU8CWAxzY

Some Millennials are, admittedly, taking the news a little harder than others, and the retaliation is swift and without remorse.

My downstairs neighbour has a daughter who lets her boyfriend sneak in through the window everyday. I’m no narc so I haven’t told her dad. Well, she just told me my skinny jeans are out. I’ll be asking her dad tomorrow why his son keeps forgetting his key. Respect your elders

While others? Didn’t even know they were Millennials until they were today years old.

Me realizing i'm a millennial with ripped skinny jeans and a side part pic.twitter.com/2cn73X2khd

And then there’s this guy…who has no idea what the hell just happened.

Can someone explain to me what we #millennials did to earn the ire of #GenZ?

Here I thought we were all cool and making fun of the Boomers, next thing I know, there’s a war on the side part, my go-to emoji, and skinny jeans…

Whether you’re team side part and cry-laughing emoji (GO TEAM!) or team middle part and the skull emoji, the reality is this: every generation does the same thing. They tell the previous generation how old and uncool they are whilst recycling the same trends and fashions of the past and passing them off as their own.

So dear littles, have your fun. Have your baggy jeans and middle parts and bask in the unearned glory that you believe you deserve. The older, wiser, ancients will just be over here, in our stretchy skinny jeans, cry-laughing at the irony of it all.

An Open Letter to a Police Officer&…