If you’ve ever traveled with a toddler then you know how exhausting the experience can be. But for one mom, the sheer confusion that comes with travel exhaustion will never be lived down.

She accidentally broke into a family’s home, cleaned it, then live-Tweeted the event as she realized she was in the wrong place.

It all started when Twitter user Ruth Ibegbuna took her three-year-old child to Italy and intended to check into their Airbnb but got the number wrong. She walked into her flat and quickly began cleaning up the mess she assumed had been left by the previous renters.

“Arrived in Italy late last night. Disappointed by an unlocked Airbnb flat that hadn’t been cleaned/tidied after the host seemed fab. Meticulously took photos for feedback & irritatedly started tidying up at 1am. Then realised…Wrong apartment. #14 not #16 A family home,” the tweet read. 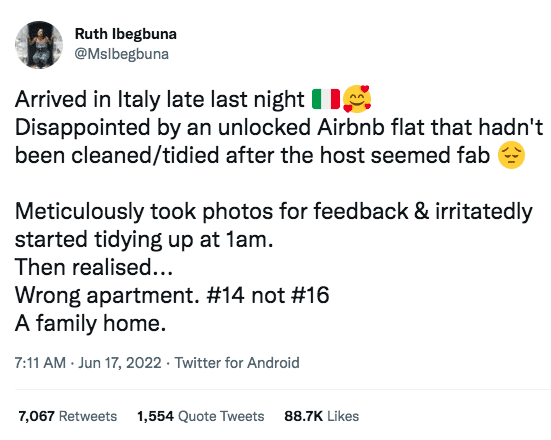 The tweets get better. In the thread, Ibegbuna details what she encountered in the wrong Airbnb.

“I’d brazenly broken into an Italian family home at 1am. With a 3yro. Put my snoring daughter on their couch. Photographed evidence of their slovenliness (fags & beer) Used their loo. All with no one waking OR saying a word. (Probably cowering behind a door & phoning police)”

For those who have never been to Europe or heard the term “fags” in a context not being used as a slur, “fags” is British slang for cigarettes and comes from Old English, which means “bundle of sticks” hence cigarettes. 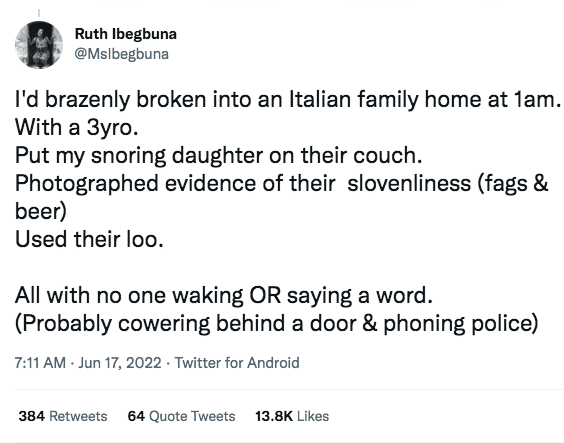 Can you imagine the comedy of errors that occurred for this person to walk into a family home, put her toddler to sleep on the couch, and then start cleaning!?

I’m over here wishing this would happen so I don’t have to keep tripping over toys or washing the 18 cups my kids use for water every day.

Apparently, Ibegbuna realized what she was doing and quickly vacated the home. She wrote in a third tweet about the hilarious moment when she pieced it together.

“I then had to pick up Thea and attempt to leave quickly & quietly. Try to put the mess back in the right place. Wash up my cup. Go next door and then use Google translate to write a long snivelling apology to the family and try to explain myself. Put it under their door at 2am.” 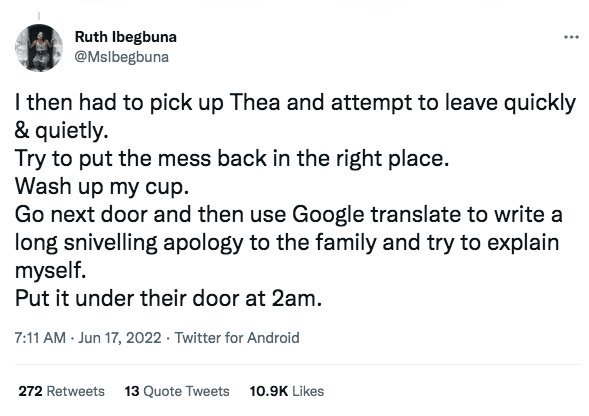 As a visual aid, Ibegbuna posted an image from the big adventure, writing “I’m just staring at a wall remembering the horror of it all.” 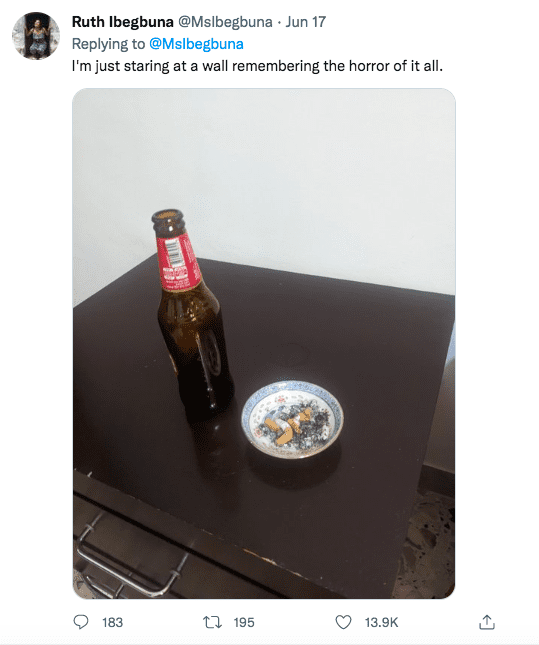 As you can imagine, the comments under this Twitter story are a hoot, and thankfully our intrepid traveler has a good sense of humor about it.

One Twitter reader asked for a follow-up to the story.

Lizzie Spring wrote, “Just re-read this to have another laugh, it is utterly cheering. Please tell, did they reply to your google-translate note or are they still hiding?”

And Ibegbuna replied, “No reply yet. It was written on my daughter’s James and the Giant Peach notepaper – all that I had available. I’m laughing remembering because it had her scribbles on one side and I had to Google translate, “Please ignore this side!” They probably just think I’m utterly bonkers.” 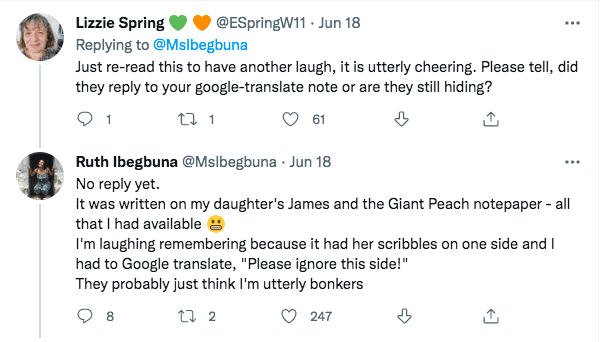 Others took delight in the absurdity of the situation, bringing some hilarious culture into the story.

Naomi Phillips chimed in, “I literally love that you took the time to wash up your cup. That is the most British thing I think I’ve ever heard. Please tell me you’d made yourself a cup of tea.”

To which John Durno replied, “Or maybe the more practical reason of removing fingerprints and DNA.

All kidding aside, the author is lucky she didn’t get hurt or arrested. But honest to God, the image of a tired mom staring at a wall in the correct Airbnb, trying to figure out how to live life after that hilarious moment of “OMFG, WHAT HAVE I DONE!?” makes this story even funnier.

We hope Ibegbuna had a lovely vacation despite the very wild beginning.

If You’re a Dirty Bird w…