Moms will do literally anything for their children.

So when one mom’s eight-year-old daughter begged her to participate in her school sports day, she didn’t refuse (even though sports aren’t exactly her strong suit.)

The mom in question, 36-year-old Katie Hannaford, took to the field to participate in the “mums race” at her daughter’s school in Basildon, Essex.

However, things didn’t go according to plan. The race? Turned racy.

Because unfortunately for Katie, not only did she choose to run in the race but she also chose to do it wearing a dress.

And not just any dress. A loose-fitting shift dress. And I know you know where this is headed.

In a Facebook post that has gone viral, Katie shares her hilariously horrific tale of accidentally mooning spectators when she trips and falls. Ass over teakettle.

Whoops. Or more appropriately, bottoms up!

“When the kids got more at sports day than they were expecting! Haha
If you can’t laugh at yourself then what’s life about ay!
Sorry kiddo’s and anyone else watching!”

In the video, we can see Katie running in the middle of the pack. (That’s her in the blue dress, fourth from the right.)

At first glance, she appears to be holding her own. While she may not be in first place, she’s at least keeping up with the rest of the moms.

Which honestly, is no small feat considering she’s running in bare feet, which may be what contributes to her eventual downfall.

Before Katie even knows what’s happening, she trips over said bare feet and they’re no longer the only thing she’s baring.

One second she’s running, the wind blowing through her hair, the next second she’s falling. Flat on her face.

But because doing a faceplant isn’t humiliating enough, the momentum proves to be too much for her. Her legs have nowhere to go but-t up.

But what goes up, must come down.

And while her knees come down, her keister does not. Rather, her hiney goes high.

This wouldn’t be so bad, except for the unfortunate fact that Katie’s dress also succumbs to the gravitational pull of the earth and hurtles itself to the ground via her head (which stands to reason, as this is the part of her body closest to the earth.)

Katie’s ASS-ets are now on full display. And the crowd behind her is graced with a full moon.

Their reaction is pretty much what you’d expect.

There is shock and awe. Children desperately try to avert their eyes.

There is no unseeing it.

As for poor Katie? While this may be enough to make the weak among us literally up and die from embarrassment, Katie proves to be a rockstar and takes her fanny-flashing fall in stride.

(Although her daughter may never be seen in public again.)

In an interview with the media, she gives a bit more insight into “Bootygate.”

But coming in last was the least of her worries, apparently.

Katie goes on to explain:

“I was humiliated at the time, but it is what it is! I flashed my underwear which is obviously embarrassing but you just have to own it.

Looking back, it’s hilarious – definitely the funniest thing I’ve ever done in my life!”

And own it she does, posting it to her own social media page.

The 8-second video has been watched a whopping 470K times. And Katie’s not the only one who thinks it’s funny.

The majority of commenters couldn’t stop laughing. And if they weren’t posting crying/laughing emojis they were tagging their friends.

And I think we can all agree with this commenter who summed it up best in one word:

In another Facebook post about the event, Katie revealed the lessons she learned from her own “reveal.”

“Lessons learnt… I’m no longer 21 and shouldn’t run in the mums race and don’t ever wear a dress when running!”

You can check out her original video here: 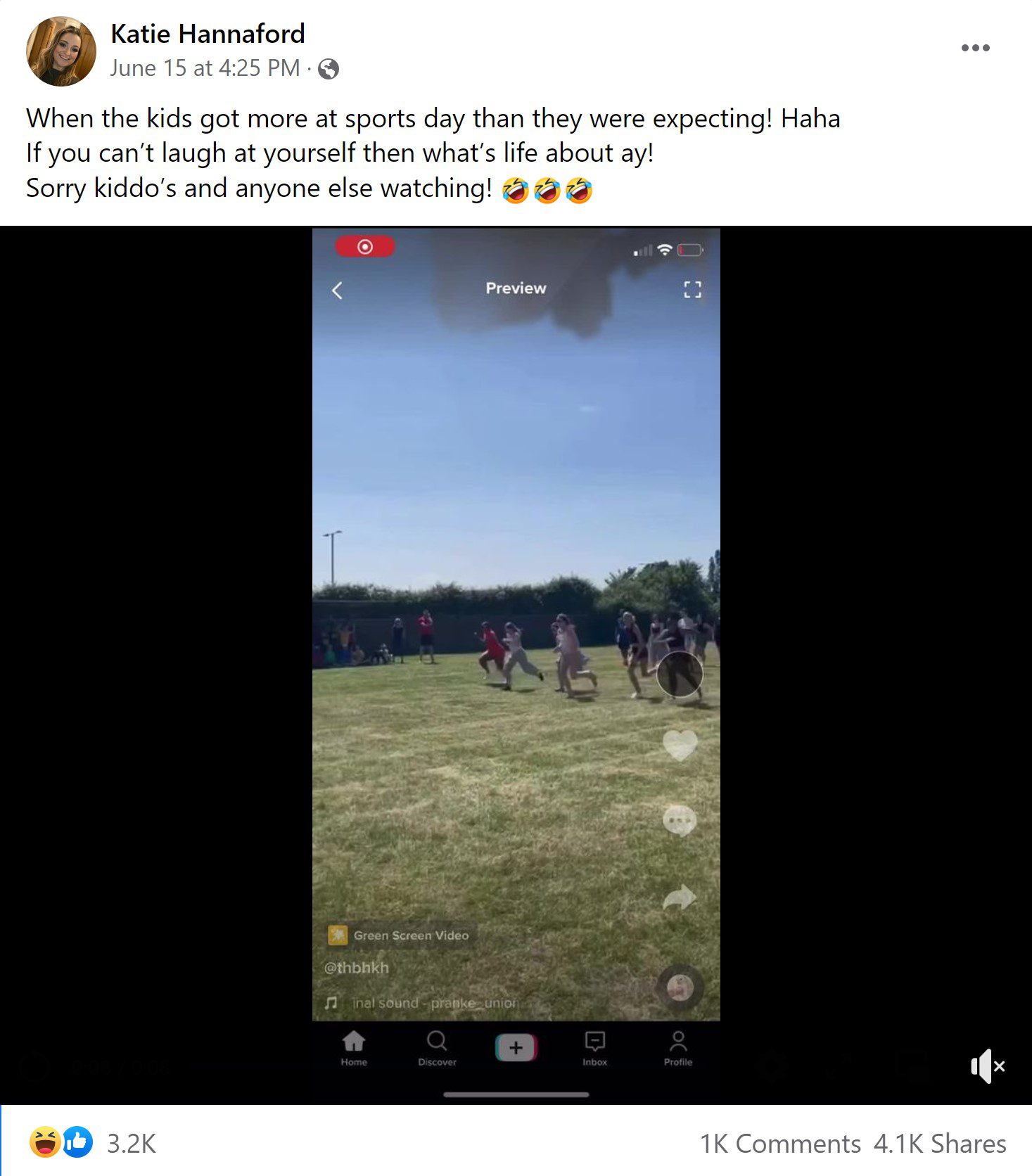