Raising kids can be a messy business. But raising boys comes with a very special kind of mess- we’re talking their ability to pee virtually anytime, anywhere.

If you’re the parent of a son, then you know how their urine can be found in the most unexpected -and unpleasant- of places. With toilets readily available you’d think the most logical thing for a boy would do would be to pee IN IT- but you’d be wrong.

Here’s a recent horrifying example: there was a strong scent of urine lingering in my basement recently. I assumed it had been the cat.

It wasn’t the cat.

For days I tried to find the source of the odor. And one day, while moving items on the bottom shelf in our laundry room, I found the source. It was a flower vase, full of urine.

To be specific, it was urine that had been marinating in my basement for who-knows-how long because my youngest son figured “why not?”, apparently.

I know, I know. Some of you are disgusted and appalled. But I’m not alone in my boy-pee trauma; many mothers of sons can relate to the shock and horror of finding their son’s urine in the weirdest of places.

A mom of three sons nails exactly what raising boys can be like when she penned a Facebook post describing what she found in her bathroom trash can (hint: it wasn’t trash).

Charissa of the blog The Wild, Wild, West is the mom of three young sons, so she’s got plenty of experience when it comes to the highs and the lows of raising boys.

What’s it like to raise boys? As Charissa puts it:

And she’s right: boys are definitely adorable. And fun. And yup, sometimes kind of gross.

Case in point: following dinner one night, Charissa used the bathroom, and noticed something rather unusual near her trash can:

“Hmmm… did I just see liquid in the trash can? Better investigate further.”

Because like anyone who has kids knows, finding unusual things in your bathroom is simply part & parcel of parenthood: toys lodged in the toilet. Mysterious liquids on the floor. The sink stopped up with… who knows what!

But Charissa’s find was far more than the typical toy-in-the-toilet deal:

ONE OF MY DELIGHTFUL CHERUBS had apparently:

1) peed in the bathroom trash can and

2) also put his peas in it from dinner that he didn’t want to eat.

So the suspect son had left a trash can of pee-PEAS, hoping that both his urine and his uneaten veggies would go remain undetected. So the offense was both urinary AND culinary in nature. And why were these dastardly deeds performed together??

You could almost sympathize with the dumping of the peas. I get it. In fact, my own daughter once dumped a massive spoonful of peas from her plate onto the floor beneath our dining room table.

Her fatal flaw: We don’t have a dog. BUSTED!

Getting rid of undesirable dinner veggies is a trick as old as time, but any savvy kid knows- you gotta FLUSH the evidence!

Charissa’s son not only tried to unload his uneaten dinner peas, but took a rare moment of bathroom solitude to unload his PEE as well.

And when the perp in question was confronted about his dirty deed, this was his response:

“Well, I really really had to go and I couldn’t hold it in time to go in the toilet.”

Charissa wasn’t buying it, either:

Umm no, you little psychopath! The trash can and toilet are ONE foot away from one another in a teeny little bathroom. Nice try.

As for the peas, her son’s explanation was simply:

“Well, they were yucky.”

Ahhh, of course. Now it makes perfect sense- in a boy’s mind, anyway.

Charissa’s tale of urine woe might seem a little… potent to some, but to those raising boys, they get it, because: THEY’VE BEEN THERE, TOO.

Based on the supportive comments on Charissa’s post, there are a lot of boys out there that are peeing in a lot of things that are definitely not toilets: 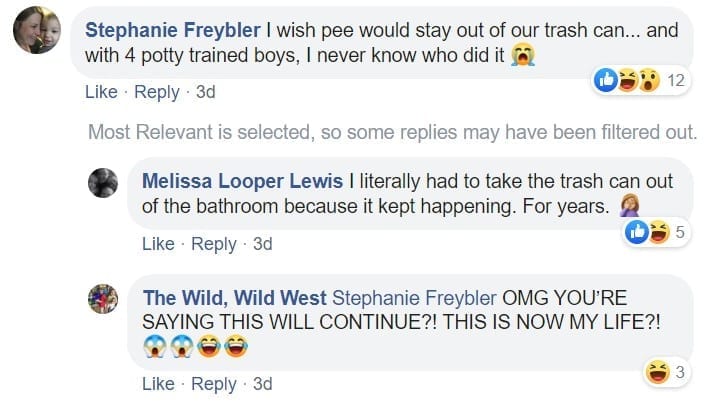 Trash cans- boys love ’em. And yes, this in now your life with boys.

Well, at least they’re not fighting, so there’s that, right? Right??

Forget the skeletons in your closet- this one is way more pungent…!

Imagine a warm, cozy winter day… and the air filled with the musty ammonia-scent of stale pee. Happy holidays, indeed!

And how many innocent cats are getting blamed for our boys’ pee preferences???

Yup. Scrub the bathroom walls. The shower curtain. The floor. The trash can. The toilet brush holder. The baseboards. These boys spray like fire hoses on full-blast, people!!

And you thought my basement pee-vase anecdote was rough? This kid is SAVAGE. And poor mom, with a few more bites in until the reality hit…

Sometimes ignorance is bliss. Sure, it might be smelly, pee-like bliss, but actually seeing the level of boy urine destruction might not be for the faint of heart. 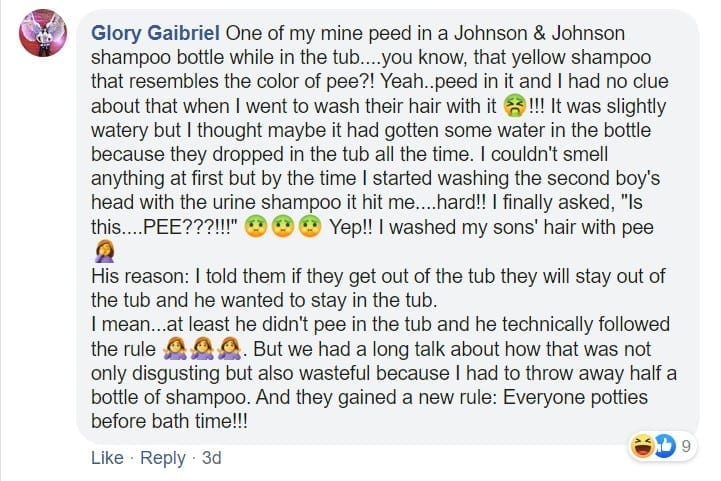 “This shampoo always smells so swee– WAIT. Is that… PEE??” Can you even imagine?? (If you’re a boy mom… you can.

See, it’s not just about the accuracy of aiming urine into objects urine shouldn’t be contained in- the sheer distance counts, too.

Well… at least the little dude deserves some points for practicing, right?

These are just a few of the examples of boy-urine “incidents” which moms shared in support of Charissa’s post, and there are many, many more.

So while our boys are indeed loveable, and adorable, and fun, they are also just plain weird when it comes to their penchant for peeing in places pee simply should not be!


Disney Employees Among Many Arreste…

When Korben told his mom, Nina Green, at twelve he wanted to wear a gown to his prom, he couldn’t … Read More