Every parent knows the shitshow that can happen when you’re out and about with young kids.

So you try to be prepared. You bring snacks. You scope out exits and bathrooms. You say a little prayer.

But no matter how prepared you may try to be, sometimes, there is no preparing. There is only crying and chaos and class five meltdowns.

But what happens when a family outing turns into a literal shitshow?

In a FACEBOOK POST that has people shaking their heads saying, “You’ve got to be shitting me” (haha, pun totally intended) one mom shares the story of her 4-year-old hilariously pooping in a home improvement store’s display toilet.

Caroline Akhtar and her partner, Aaron, were shopping at B&Q (a DIY store) in Glastonbury, UK with their 3 children in tow — 4-year-old son Jacob, and daughters Frankie, 3, and Eliza, 1 when the fecal fiasco occurred.

“Can’t quite believe what’s happened. J has taken a very big poo in one of the B&Q display toilets.”

She and Aaron only turned their backs for a minute (and the collective sound you hear is every parent everywhere, nodding “Ahhh.” Been there. Done that.)

Right there, out in the open, on a display toilet.

“Only went in for a washing line, turned around and J is sat on one of the toilets.”

And really, can you blame the kid? Okay, fine. Yes, yes you can.

First, the kid needed to go (props for being potty trained!) And when nature called, the porcelain gods answered.

And Jacob merely seized the opportunity.

Second, kids have zero respect for privacy. Especially when it comes to people and bathrooms.

Third, his sister made him do it. At least, that’s the story he’s sticking with.

“He said his sister, Frankie, said he could use it. Eliza was oblivious to it all and happy just playing on the toilets.”

Upon seeing Jacob riding the porcelain bus, Caroline quickly ran to him in a desperate attempt to divert a defecating disaster.

But alas, she was “very much too late.”

“Ran to say get off but it was very much too late.”

We’re guessing that at this point, she was calling to her husband to “Do something!!” And we can just imagine how that conversation went:

Caroline: “Your son just shat in the toilet.”

Caroline: “I shite you not.”

In an effort to try to contain the craptastrophe, Caroline ran out to the car to grab some wipes, leaving Aaron to handle the situation momentarily.

You would presume that Aaron would remove Jacob from his throne of delinquency but you would be wrong.

Apparently, Jacob wasn’t quite finished yet.

“I left to get wet wipes and came back to him still sat on there because he ‘needed to finish’ and hubby didn’t know what else to do.”

I guess this one isn’t covered in the employee handbook.

Just look away, lad. Look away.

In the interview with NeedToKnow.online, Caroline explains what happened next:

“He was still on the toilet so I proceeded to help wipe his bum still and explain about the toilets in shops are not actual toilets.”

While she was cleaning up Jacob and giving him a much-needed life lesson, Aaron was doing his own bit of cleaning…

(Let this be a reminder to all the singles out there: Find yourself a man who’ll clean the toilet.)

Initially, the parents were mortified by what went down in toilet town.

However, it didn’t take long for them to find the humor in their son’s fecal faux pas. After all, if we don’t laugh, we cry, while rocking ourselves in a ball on the bathroom floor.

The post has received over 29K likes and 42K shares with the comments mostly consisting of laughing emojis and an occasional OMG.

And then there was this one:

It would also seem that this is not just an isolated event. Jacob isn’t the only kid who has done this:

One thing is for sure, parenting is a crapshoot. You just never know what’s going to happen next. 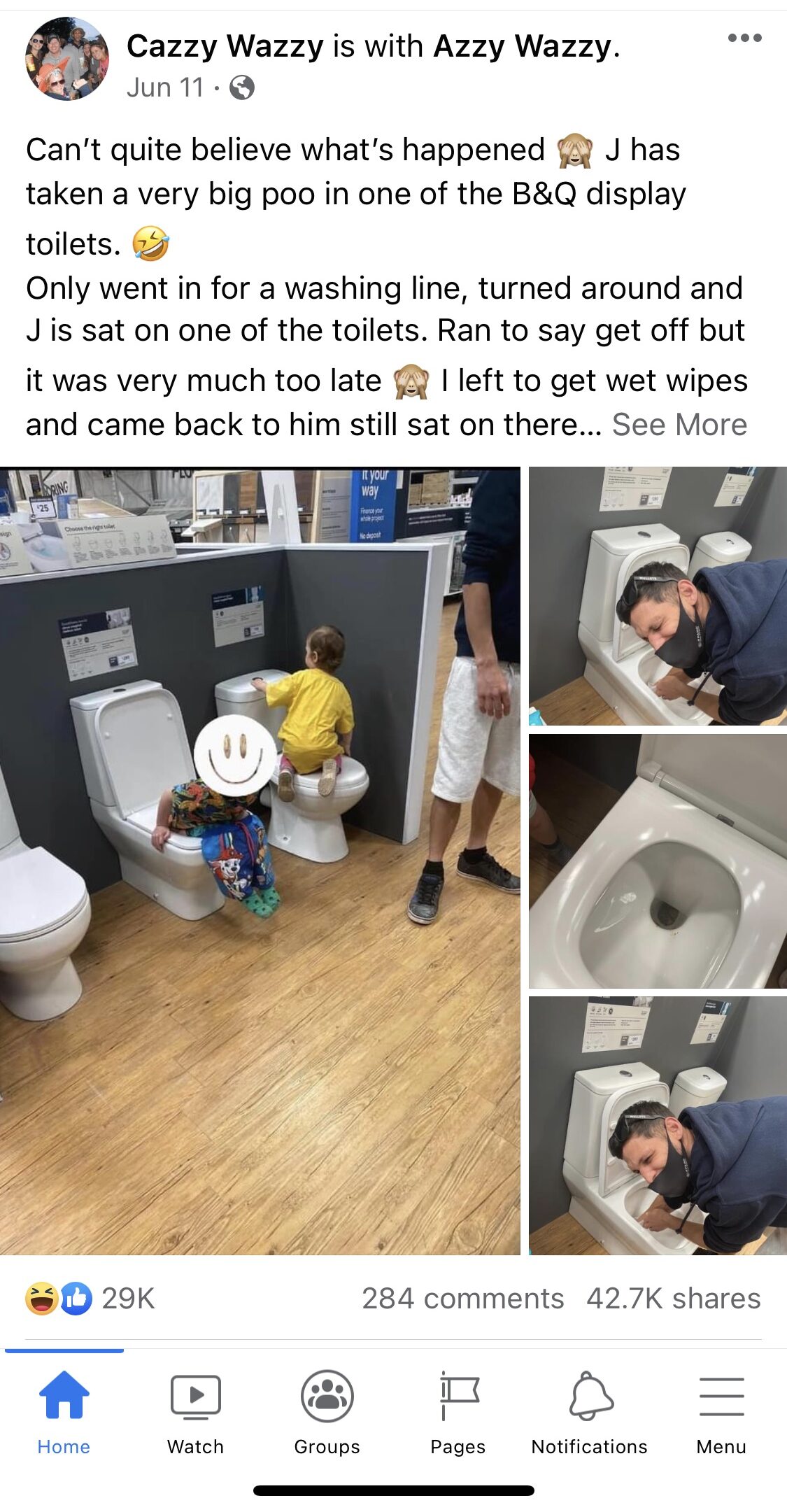