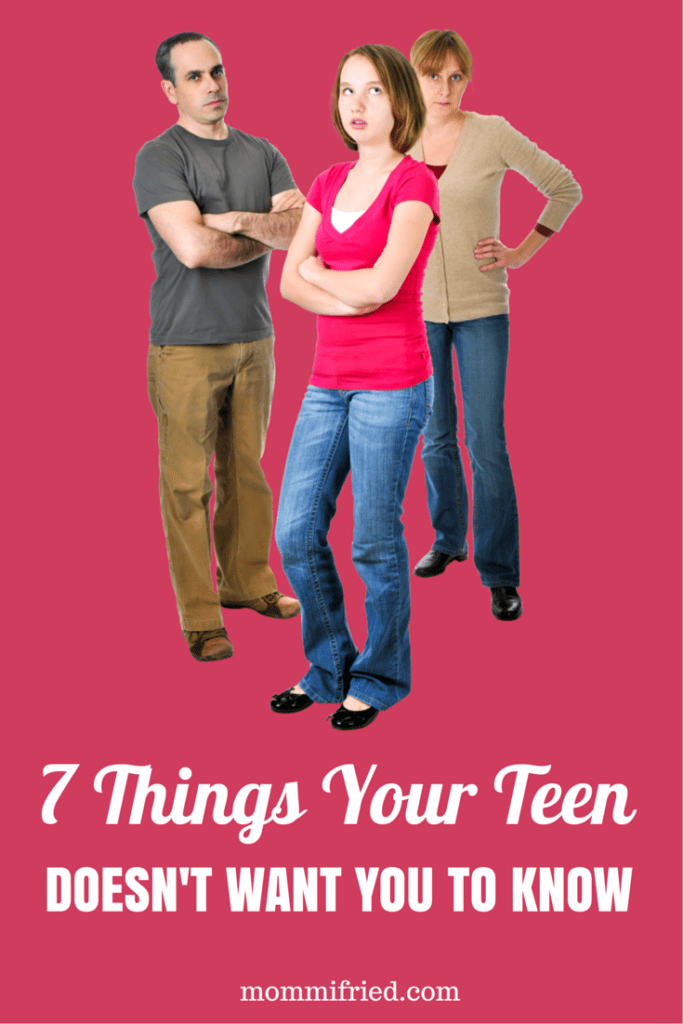 Teens. Pre-adults with attitudes. This age group loves to put our parenting skills to the test. They’re also master manipulators with a lot to hide! Think I’m kidding?

Here are 7 things your teen doesn’t want you to know:

They Think About Sex… A LOT!

They’re always thinking about sex. Sex. Sex. Sex. Feeling a bit uncomfortable? Well get over it. Once your teen’s hormones kick in, you need to step up and make sure they’re educated, safe, AND protected. Whether you think they’re ready or not, when a teen decides it’s time, it’s better to have had that talk. They should feel comfortable coming to you for advice (and the purchase of condoms). An open and proactive relationship with your teen can keep them from battling a lifelong contracted disease or even save their life. It can also prevent you from becoming a young or middle-aged grandparent. Booyah!

They Will Find a Way to Communicate

Here’s something I learned recently… When you take away your teen’s smartphone, they can still access Facebook Messenger via their old phone as long as they have Internet access. I discovered this after my son accidentally left his Facebook account open on my laptop and a flurry of messages came through from his girlfriend. Which he responded to in real-time AFTER I had confiscated his current smartphone and iPad. They will find a way to communicate, dear parent; be it an old phone or smoke signals (hopefully not of the hemp variety).

They Know Not What They Think They Know

Your teen doesn’t know everything. And they know they really don’t know everything. Deep down inside, teens realize they are as street smart as a baby fawn in the Florida Everglades. They’re pompous little heathens, yet refuse to let on that they are anything but all-knowing. Give it time. They’ll eventually run to you admitting their ignorance. It might be thirty years from now, but it will happen!

Letting You Down is a Real Concern

Teens constantly worry about failing and disappointing their parents. They won’t come right out and tell you their fears, but those feelings linger beneath the surface. Everything from mid-term grades to making the basketball team keeps them on edge. They want you to be proud of their achievements even if that means taking first place in a burping contest. Don’t hold back. Constantly give them positive and constructive feedback. “Hey Jimmy! That was one heck of a belch! I’m so proud you’re my son! Congratulations on winning the contest!” Every acknowledgement counts.

Doctor? Engineer? Pole dancer (not over my dead body)? Who Knows!

Think back to your teenage years. Did you know what you wanted to do with the rest of your life when you were 15? Probably not, so stop asking your teen. They have no idea what they want to be when they grow up. It’s okay to encourage and expose them to different career options, but give them a chance to explore the world and mature before making such a paramount decision.

They Play Dumb, but are Full of Intel (It’s Called Selective Hearing)

So your teen might resemble Bender from The Breakfast Club. It doesn’t matter. They hear all the juicy stuff that permeates around your household… all the stuff you don’t want them to hear. Dad couldn’t get it up the other night? Check. Mom overdrafted the bank account last week? Check. Little Sis got caught smoking cigarettes under the bleachers? Check. YET! Miraculously, they never hear when you ask them to bring out the trash, make their bed, or put their dirty clothes into the hamper. They practice the art of selective hearing with Michelangelo status quo.

What is your teen trying to hide from you? Share in the comments!

If You’re a Dirty Bird w…

Science Is Telling Us That Empathic…

Kids can be rude and disrespectful at home, and sometimes it’s hard to use gentle parenting when they are. My … Read More