While the catch-phrase “bigger is better” might work in your favor in terms of an order of filet mignon or a hefty tax return check, it’s seems like more of an alarming prospect when you’re talking BABIES.

As any woman who has every been pregnant knows, squeezing a human being through the ring of fire that was once your intact hooha is always a daunting prospect… but especially so when your baby is the size of a toddler.

Thankfully one mom didn’t have to push her massive man-baby out of her vagina, but even with a C-section she wins the biggest baby contest- a title we’re all relieved not to be in the running for.

A TikTok user posted a video clip asking moms to share who delivered the biggest baby, & one mom’s tale of her 14lb newborn has left TikTok with thoughts. Lots of hilarious thoughts.

This terrifying tale began when TikTok user @tawnee117 asked fellow users to share their “biggest baby” stories. She asked people to share the weight of their biggest baby at birth:

Fellow TikTok user @shans1588 was more than happy to oblige, & when you hear her “weighty” tale, you’ll feel your womb cringe in sympathy (or horror).

Lest you think Shan is exaggerating, this is not her first rodeo in terms of birthing babies. She mentions that her big boy was actually her second child… and if her uterus gets a vote, maybe her last, because that uterus was apparently stretched to the gills!

For the love of all things holy, wow. That is literally TWICE the size of all six of my kids, & my vajajyay is screaming in terror at the thought of that gargantuan cranium trying to head for the hinterlands.

He was also 23 and 3/4 inches long, which is a good 3-5 inches longer than the average newborn. We’re talking nearly two solid FEET of beautiful boy baby right there, folks.

Thankfully, Shan’s son was born via C-section. And it took two doctors to deliver him, because this big ‘ole bouncing baby boy needed a tag-team of medical professionals to heft him up & out.

Shan then acknowledges what most of us are thinking:

Yes. I gave birth to a TODDLER.

To ensure that her son was in perfect health despite his unusual size, the doctors kept the big baby boy under observation for the first few days of his life:

(To absolutely no one’s surprise:)

he was clearly the biggest baby in there.

Shan’s son was so large that the NICU ended up having to scramble to acquire size-appropriate clothing & diapers for him:

They had to go up to pediatrics to get size 3 diapers for him.

(For those that are not familiar with diaper sizing, size 3 is typically worn by babies around five months of age.)

As for his clothing size? Forget the sweet, tiny newborn outfits Shan likely packed for him; her baby boy needed to be shopping the Big & Tall section:

and he came home in clothing 6-9 months.

While no one dared to contest Shan’s victory in this arena, TikTok users had plenty to say about her son’s size, and gleefully “weighed in” (pun intended).

Some kids mature faster than others… and clearly Shan’s son matured right past the newborn stage, and then some.

Then again, forget the toddler stage, too- this little dude outgrew most of his childhood prior to birth:

Clearly this boy is in a hurry! Enough of that whole baby thing; Shan’s son is onto bigger and better things (emphasis on the “bigger” aspect), like driving. 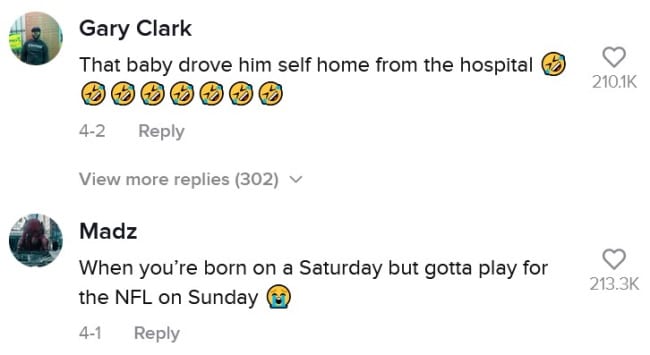 Others were concerned about Shan. How did Shan DO THIS??

(Agreed, Dion. I also want to know what Shan’s son looks like now. And I hope he treats his mother very, very well, because she deserves massive props for successfully incubating a baby the size of a Thanksgiving turkey.)

And speaking of Shan’s welfare, we are all collectively grateful that Shan’s son was born by C-section instead of vaginally, because there would be NO coming back from that for her poor yayo.

Though if that picture is any indicator, it looks like Shan’s son was large & in charge at this birth:

While Shan told her harrowing tale with humor, we can all agree that she’s not only the winner of the Biggest Baby contest, but deserves eternal gratitude from her husband (and son!) for successfully gestating this massive man-baby.

While we may never know what Shan’s son’s current size status is, we can all agree that 1-Shan is the definitive champion in the “Biggest Baby” contest, and 2- our collective uteruses are happy to be the losers.