My oldest child’s first word was “pretty.” He crawled at nine months. He walked at eleven months. I know this because I paid attention to every single thing he did with awe and admiration as though he were the most perfect, most important child that ever graced the earth. And then I had a second child.

My second child must have started walking at some point because he walks now.

His first word was “Mommy,” I think. Possibly “Daddy.” Maybe “cookie.” Hell, it could have been “Ecumenical,” for all I know.

Second Child Syndrome is a real thing. As a first born child, I thought I had it rough until I gave birth to a second child. And realized they basically get the table scraps of parenting.

These are just some of the things you don’t bother doing with Baby Number Two.

It just doesn’t happen. If you are getting ready for the birth of your second child, stock up on baby wipes — they will play double duty (triple if you factor in they are now what you use to clean your house.)

When I was Pregnant with my second, one of the parents at my daycare job bought me a super mega pack of wipes as my Christmas gift. She knew.

If you are about to hold someone’s second child, plan on them being sticky.

I spent no less than six hours looking in multiple stores just to find the perfect baby book for my eldest. I filled it out meticulously. Would you like to know who his best friend was at three months old? Because I can tell you. I put so many photos in it I had to add pages.

I did buy a baby book for my second one. I even put thought into it. And I filled it out just enough that I couldn’t resell it.

If you want to know who my second child’s parents are and what his full name is, I can look that up for you. He didn’t have any friends at three months old, though, because I didn’t have time for this baby to have a social life.

Now, in fairness to me, these didn’t exist when I had my first child (but you can bet your life I would have been all over that sh*t.) Smart phones weren’t even a thing. The equivalent at the time were monthly Facebook albums, and I filled them faithfully. They are still there, in their organized glory. You can easily watch my first child grow.

You can watch my second child grow too, as long as you don’t mind sifting through the all-encompassing Mobile Uploads albums to piece it all together.

Three books, six songs, laying in his bed until he (or both of us) fell asleep — bedtimes were a long, lovely process with my first.

My second gets a book, a hug, a kiss, and a threat not to get out of his bed or call me unless there is a fire.

I worked out that I took over a thousand photos of my first child during his first year. With an SLR, no less. I had to download those suckers onto a computer and everything. I printed half of them and organized them into photo albums, which I then captioned.

This wasn’t enough for my precious Snookums, Lord High Baby Ruler of the World. I painstakingly and expensively scrapbooked each year of his life until he started Kindergarten.

I think I printed one photo of my second as a baby, and that was mostly because I was impressed with my own Photography skills. 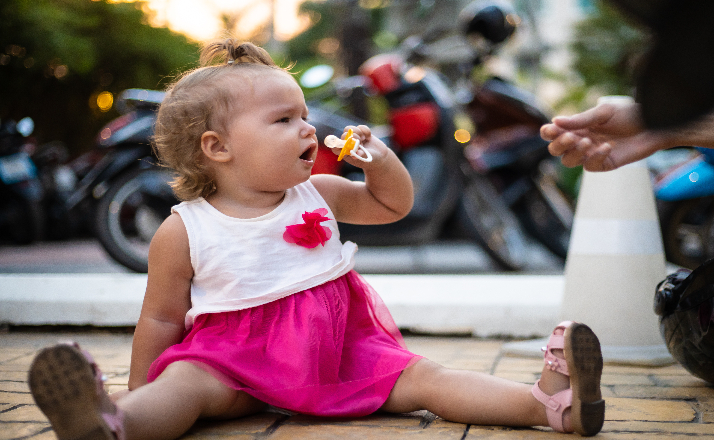 My mom used to say the difference between the first and the second child was best illustrated by the pacifier.

I confiscated and then washed every toy that fell on the floor at a restaurant with my first. By the time my second came along, if I could have safely stored him on the floor under the table while I ate, I would have.

Are you seeing a trend? Invest in mirrors when you have your second child so they can try to memorize what they looked like for when they’re older.

We were at Sears so often with our first they used him in some of their promotional photos.

Our second kid had a cake smash. It was a beautiful shoot. Thank goodness, because it’s the only one he got in his babyhood.

Number one: The AAP says no screen time for babies, so no TV for him. In fact, if I am watching TV, I will turn him away from the screen. Maybe I will just watch TV when he’s asleep. He never sleeps. Okay, so I am giving up TV for a year.

Number two: Oh, that creepy singing clown video calms you down? Here, let me get you a better view.

There are, of course, advantages to being the second child.

Less responsibility than the first child, you get away with more, and of course, your parents did all their big screw-ups the first time around.

When it comes to the little things, though, the second child definitely gets the short end of the stick. But if it makes you feel better, Second Child, the third child doesn’t even get a stick.

As if shortages hadn’t already been a giant pain in the derriere, now menstruating people are having to pay gauged … Read More