We’ve all heard by now that bath toys can grow mold and get pretty gross. There are lots of videos on YouTube of moms cutting rubber ducks in half and exposing black slimy mold to viewers but do you know how dangerous that mold can be?

In a Facebook post that has been shared more than 127K times, Eden Strong, a mother, and writer from Illinois shares the harrowing story of how her kiddo came dangerously close to losing his vision after getting bacteria-filled water from a bath toy in his eyes.

We must warn you though, the images are graphic, so proceed with caution.

“I knew water could get trapped in tub toys, particularly the rubber ones designed to squirt water.

I’ve seen the posts where moms have cut them open and discovered a ridiculous amount of mold inside. I knew.

So I squeezed them out after each bath, cleaned them out every few weeks with a bleach-water solution, and regularly held them up to the light to look for mold,”

“However, I didn’t know that even with regular bleach cleaning, the fact that they never fully dry on the inside means that bacteria can still grow. Invisible bacteria.”

As I read her post, I realized that I was guilty of doing the same thing.

I also routinely clean out my kids’ bath toys with a bleach solution, and I too felt that I was doing the right thing. But guess what? This is where everything takes a sharp left.

“‘Baylor squirted himself in the eye with a tub toy,’ our nanny told me one day as I passed them coming out of the bathroom and noticed his eye was a little bit red,” Strong wrote.

“I figured it was just irritated from the water, or maybe the pressure of the water, and so I didn’t think much of it. But when I put him in his high chair that night for dinner and noticed that his eye looked even redder than it had earlier, I had my husband run him over to urgent care, assuming he had pink eye.”

After a doctor agreed that it was Pink Eye, they sent the family home but things got rapidly worse. That night, after being treated for Pink Eye, Baylor’s eye became badly infected and by morning his situation had become a serious medical emergency.

“When he woke up at 6 am and I laid eyes on him in his crib, I screamed to my husband to get in the car. His eye was so swollen that the white part was bulging out from between his eyelid and his iris was being obscured,” Strong wrote. “He felt hot to the touch and a temperature check showed that he had a raging fever. Despite having another child with epilepsy and therefore being pretty good at keeping my cool, I cried the entire drive to a larger hospital, praying that he wouldn’t lose his eye.”

When the family arrived at the ER, Baylor was immediately hooked up to an IV and given a CT scan to check his retinas for damage.

As it turns out, that bath toy had some potent bacteria swimming around in despite Strong’s best efforts to keep them clean. Baylor was diagnosed with severe cellulitis and it eventually spread to both of his eyes and down his face.

The Strong family is happy to report that he has made a full recovery, however, they wish to caution everyone reading to please consider throwing out your bath toys that cannot be properly cleaned and fully dried.

“I wish I could say that I hadn’t heard about moldy tub toys before, but I had,” Strong tells Filter Free Parents via email. “I knew they could grow mold and so I was very diligent about cleaning them, or so I thought.” 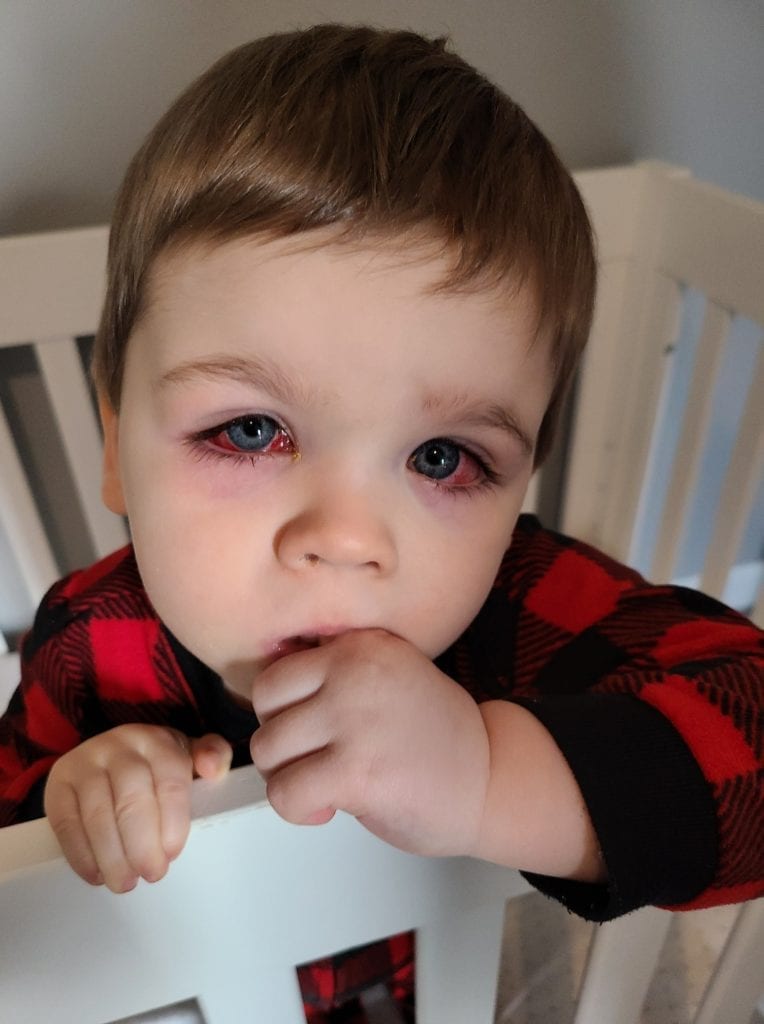 Strong says that parents need to be aware that even if you can’t see the bacteria if it’s a tub toy that cannot be fully cleaned and dried out then it’s going to grow dangerous bacteria and mold.

“My best advice,” she says, “is to throw away any tub toys that hold water. They aren’t worth the risk. Choose toys that can completely drain and dry, and even then, clean them regularly.”

**WARNING**So I learned a thing. And I’ve sat on it for a couple months because the pictures are so gross that I…

For a fun visual on what grows inside of a tub toy that holds water, check out this absolutely gross video we found on YouTube.


Husband Rescues Wife From Bobcat At…

Wife’s Call To Poison Control After…

“As a parent, I have made MANY calls to poison control. Most of which consisted of me freaking out over … Read More