Gender roles have been a hotly debated topic as of late, especially concerning what is deemed to be “appropriate” masculine behavior. But there’s no controversy regarding bullying, and shaming anyone for not prescribing to the expected “gender norms” is both bullying and wrong.

His five-year-old son Sam was relentlessly taunted for choosing to wear nail polish to kindergarten, and this supportive dad is not having it.

So Sam, like most kids his age, likes lots of things. While he enjoys playing rough and tumble with his dad and his trucks, he also enjoys having his nails polished because he thinks they “look beautiful”, as his dad describes him saying. And they do look beautiful! 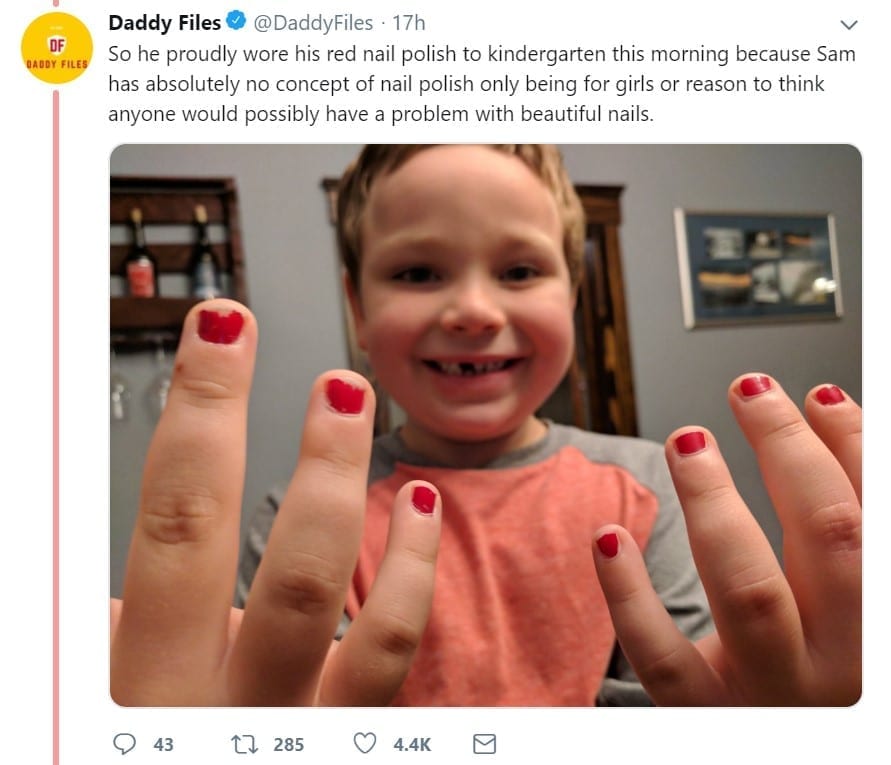 By looking at this photograph alone, it seems like a sweet, heart-warming moment; it’s an innocent young boy who wants color on his nails because it’s cool. Period. He likes the way it looks, and gender norms mean nothing to a 5 year old.

And that’s why the rest of the story is heart-BREAKING.

Gouveia describes his anguish after receiving a phone call from his wife, who told him that upon picking Sam up from kindergarten, he collapsed, sobbing, into his mother’s arms.

Why? Because Sam’s nail polish gave him a harsh introduction to the world of toxic masculinity. In KINDERGARTEN.

Think for a moment about how vulnerable and impressionable kids that age are. Now imagine being teased and bullied for an entire day, all for some irrational reason that you can’t even comprehend.

He was devastated at how other kids turned on him, even his friends. He asked them to stop but that just made it worse. Only 1 kid stood up for him.

(Kudos to that one loyal kid, by the way. I can only hope that I’m raising my kids to be THAT kid.)

As devastating as the teasing must have been, it’s Sam’s initial reaction that truly illustrates why his father shared his story, and why it went viral on Twitter within hours.

Despite Aaron’s encouragement that Sam’s nails looked “BADASS” (and it does! Remember how cool Johnny Depp’s black polish was in The Pirates Of The Caribbean??), Sam’s response after his difficult day at school was, according to his dad:

“Daddy, I want mommy to take off the nail polish so they don’t make fun of me.”

What Sam’s tiny peers unknowingly did was reinforce the idea that different is wrong. Not only is different bad, but straying outside of the expected role(s) results in punishment, in the form of bullying taunts and isolation.

Like countless others out there, Sam was taught that you’d better stick to the expected gender norms, or else.  And he was taught that at an age where kids don’t grasp those concepts on their own; they are guided in those expectations by others.

Too many people have been silenced in the very same way, and it’s a indescribably devastating experience to be rejected for being “different”.

But thankfully, that’s not where Sam’s story ends. That’s because his dad refuses to sit back in silence and let his son learn such a cruel, reactionary lesson. He addresses the nameless parents of the children who bullied his son:

And if that was the conclusion, it would be tragic. But…

Sam was given the choice on whether or not he wanted to wear polish again. And by doing so, Gouveia instilled an important truth in Sam: what you like is YOUR choice. Be true to yourself, and don’t be afraid of what your peers think while doing so.

And did Sam leave the polish on? He did. And in an amazing act of solidarity, his 10-year-old brother polished his nails, as did his awesome dad. 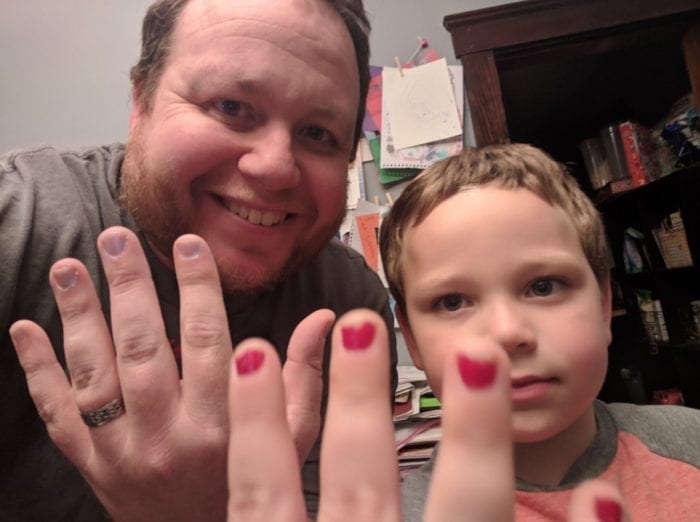 Sam’s experience highlights not only how damaging traditional gender norms can be, but also the reality of how these stereotypes are taught to children. Kids of this tender age don’t know shame until they are taught what/how to shame.

Aaron Gouveia’s public support for his son has garnered massive social media attention, and for all of the right reasons. Many people have tweeted their support & encouragement for breaking down such nonsensical gender barriers over as silly an idea as nail polish being considered “gender specific”.

A sweet example of just such support is this tweet from former Super Bowl champ Martellus Bennett:

I rock pink nails all the time. And one of my favorite activities with my daughter is when we do each others nails. pic.twitter.com/1CrsTZv0yZ

Or how about this tweet featuring professional baseball players, deemed the archtype of all “manly” men, wearing nail polish? 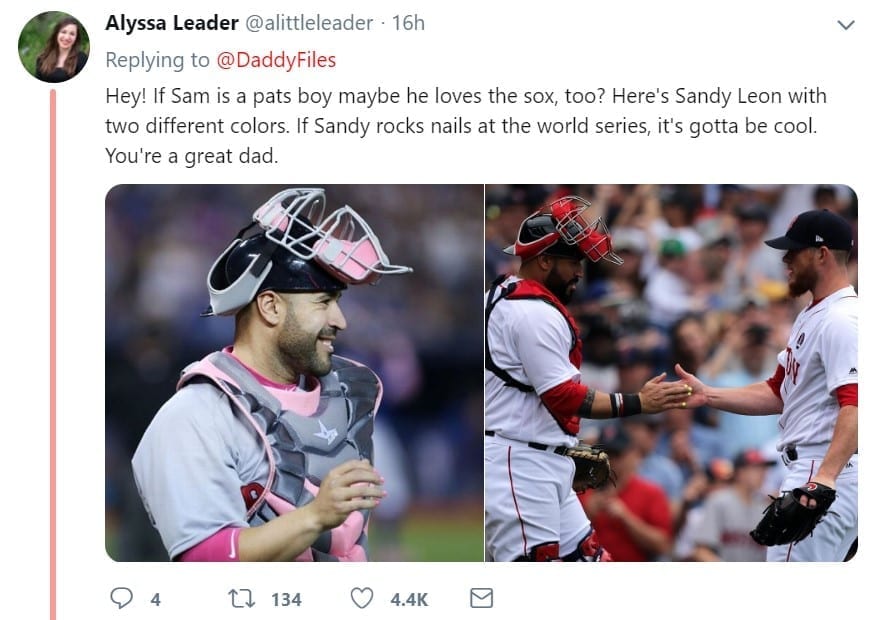 This awesome tweet thread illustrates the crucial idea that we don’t need to cling so tightly to traditional gender stereotypes in fear that relaxing such norms can make a child less of a boy (or in the case of girls playing with traditionally “boy” things, less of a girl).

As parents, we want to raise our children to be who they are meant to be without fear of the opinion of others. We also want to raise them to be compassionate towards others, regardless of differences.

Aaron Gouveia is doing an amazing job doing so, & the world is clearly endorsing his message. And for those who don’t? Well, he has this to say:

Be brave and shine bright, my beautiful polished boy. Know that mom and dad always have your back and if the rest of the world has a problem with your nails, they can check out my nail polish! pic.twitter.com/fvjD2IZnNQ


Not All Masks Are Equal – Wha…