Breastfeeding has always carried a weird controversy with it. Although it’s a natural act, some people recoil from it in shock and horror.

Let’s not forget the infamous “breast or bottle?” battles that we see play out on social media all the time.

It seems that how you choose to feed your baby automatically becomes a matter of public opinion.

And shaming runs rampant. Make a choice for your child that someone on social media disagrees with, & be prepared for an onslaught of mom-shaming.

When I was a young, nursing mom, I remember initially being self-conscious about nursing anywhere in public. But let me tell you, trying to nurse in cramped corners & stinky bathroom stalls gets old real fast.

Once I got used to breastfeeding, however, it was simply time to feed baby. There was no worry, no discomfort, no awkwardness. My baby was hungry, & I would feed him or her. I knew a few people that were uncomfortable with the idea of nursing, but… my baby, my choice!

If only people would stop judging moms for how they choose to feed their babies (breast OR bottle, by the way), the world would be a happier place.

Model Ashley Graham recently posted a photo of her nursing her newborn son in public, and the sheer amount of judgmental comments show that some people still can’t handle breastfeeding.

Ashley Graham likes to get real. And once she publicly revealed that she was pregnant with her first child, she made a deliberate effort to share honest, real (sometimes humorous) glimpses of her pregnancy on her Instagram account- stretch marks and all.

When her son Isaac was born on January 18, Ashley continued to share openly about new motherhood. One of her first public pictures of Isaac features her nursing him as her husband Justin gazes on adoringly.

But a subsequent picture that she posted on her Instagram had garnered lots of attention.

The vast majority of the comments were extremely supportive, & thanked Ashley for making them feel more comfortable about nursing their own children.

But it’s the negative responses that really hammer home how some people feel it’s not only their right to shame other moms, but to revile them. So this person believes that breastfeeding of ANY kind shouldn’t even happen in “piblic” view. But does that make breastfeeding in PUBLIC ok? I say yes.

Comparing breastfeeding to defecating is like comparing… who the hell knows? What?? I’m not sure how one can make the connection between human poop and physically feeding a baby, but here you go.

(Not to mention, visit NYC, commentor, & you’ll see that some people DO think shitting on the streets is not only natural, but totally fine!)

I’m not sure how this person is under the impression that nursing moms “announce it to the world”, considering that Ashley’s feed is full of moms admitting that they have been very timid in their approach to nursing.

You’re no better than a mom who bottle fed her kid.

Exactly. Ashley’s a mom, feeding her newborn. She’s not implying that she’s a better mom for it, or that breastfeeding is better than bottle-feeding. She’s just a mom having a happy moment feeding her baby. 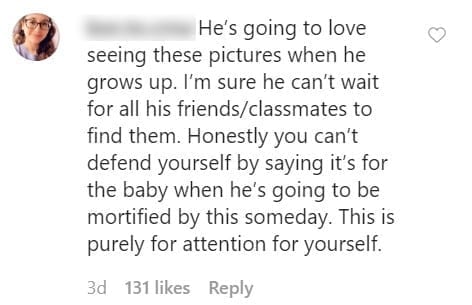 Bahaha!!! Ok, so the implication here is that this snapshot will undoubtedly cause Ashley’s son severe emotional trauma when his “friends/classmates” find them.

Well, that’s helpful. Is nursing gross? Or just how Ashley is choosing to do it? And who is this dude to think he should be telling her what to do in the first place?! 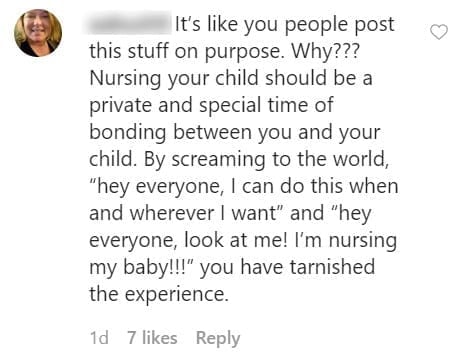 Why should nursing be a private time, but not bottle-feeding? They’re both methods of feeding your baby, right?

The commentor accuses Ashley of being almost braggy about her nursing:

“Hey everyone, I can do this when and wherever I want”

DAMN STRAIGHT. That’s precisely the point. Nursing can & should be done whenever, wherever, because babies can/should be fed whenever and wherever. 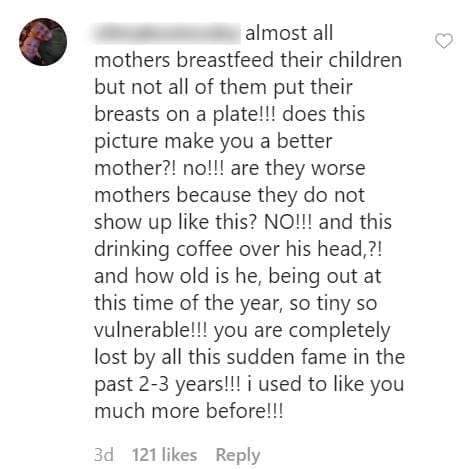 First of all, how does one draw the conclusion that Ashley’s breasts (yes, both, according to the poster) are “put on a plate”??

Does this picture make you a better mother??

No. But it doesn’t make her a “worse” mother, either. It makes her a MOTHER. Period.

And drinking coffee over his head??

That cup is nowhere near baby’s head. But I can tell you, as a mom that nursed six kids, a helluva lot of food/drink items were consumed in the proximity of my nursing child. And they all survived, lady.

And here’s the hammer of judgement… from a guy.  Not only has he decided that this is not normal, but he feels that Ashley’s decision on how to feed her child results in the proclamation that:

Yup, THERE IT IS. When you make a decision for your child that people don’t agree with, along comes the Greek chorus: “You’re a bad mom.”

What’s interesting to note that although many people were condemning her “vulgar” display in nursing her son, they didn’t have a problem with her modeling pics that exposed far more skin.

Not a single negative comment on THIS one. There shouldn’t be, but her nursing pic shouldn’t have gotten the hate it did, either.

As this savvy poster pointed out, the hypocrisy is there. Exposed (or partially exposed) breasts are fine… as long as it’s not involved in feeding a baby.

What it boils down to is we need to stop obsessing over how mothers choose to feed their babies. In terms of breastfeeding specifically, it’s legal in all 50 states.

While you may prefer Ashley to cover up more, or to go hide in a bathroom stall, how she chooses to nurse her child is HER choice.

Too many people stigmatize breastfeeding as sexual or vulgar, & it needs to end. FED is best, and I’m FED UP with people shaming moms for whatever choices they make to care for their children.

It’s not a secret that kids are basically adorable little germ factories. If you’ve ever spent time in the average … Read More