Technology has drastically changed the world since it’s explosion over the past couple of decades. Smart phones, email, messenger, texting, and social media have transformed the way we communicate, socialize, and the way we work.

And for Millenials and Generation Zs who have grown up only knowing technology, it can be difficult to understand just how any of us survived without it.

In a Facebook post that has quickly gone viral with over 13,000 shares so far, Barbara Noble Sobel shares screenshots of texts shared between a college-aged son and his mother.

The name of the poor, unenlightened gentleman has been blacked out in an effort to protect his innocence and his identity. The young man is desperately trying to understand how the world even functioned before email, because, like, O-M-G. And I’m laughing so hard right now.

The post begins with our college student begging the question:

How did any of college work before email? Like what did you do? If a class were cancelled, or there was a mistake on the homework 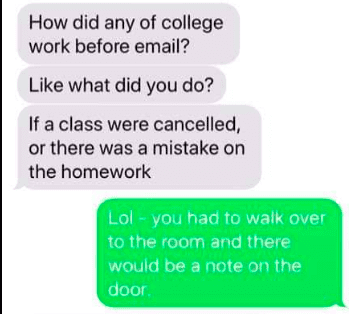 Oh poppet. I know, this can be difficult to understand, but his mom tries to explain it to him as simply as possible.

But he still wasn’t quite getting it. Aw, bless. His response?

What if it was at 8 am? You’d still have to wake up early and walk all the way in?

I know, walking. The horror. And still having to get up so ridiculously early? At 8 am, I mean, who does that? Just you wait my little Padawan. Some day, in the not so distant future, you will relish the day you can SLEEP IN until 8 am.

But the conversation doesn’t end there. He goes on to question how you would find out about, well, ANYTHING? Important things, like what ensembles he’s in or what jobs he has to do for the math department.

His mother responds with:

You had to write stuff down. And it was posted on bulletin boards

And this, my friends, is where it really gets good. Because bulletin boards? What are these boards you speak of? He doesn’t even know what it is. 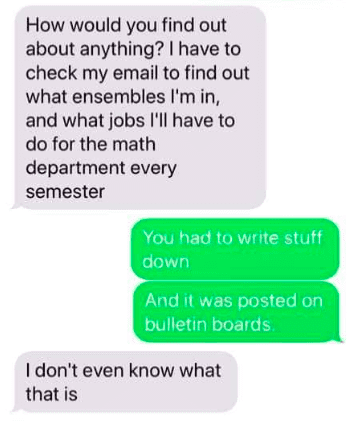 And how would you read something on a bulletin board “without walking all the way to the building?”

There’s that damn walking again. Honestly, such a nuisance, and what a waste of time! Time you could be sleeping. Or reading emails.

His mom then offers up that she got her first job from an index card posted on a bulletin board outside of the math building.

Which, in turn, led them down another rabbit hole of questions. How would you respond to a post on a bulletin board? What if you needed more details? Where’s the link? His mother has an answer for that:

You had to call a phone number. That was it. And ask questions once you get there.

Like, call them? ON A PHONE? And you had to meet with them? IN PERSON? Madness. Absolute and utter madness. College boy responds:

I got a job after receiving and responding to one (1) email, I can’t imagine having to interact with someone for it.

Commenters on the post are having a field day:

Oh my- doesn’t know what a bulletin board is???? Pardon me while I go rinse off my triceratops…

Omg you had to walk and talk to people. So archaic

These are kids who would looking at floppy disk and say “oh, someone 3d printed “save” button”

And reminiscing about the “dark” days:

Research by Microfiche, anyone?!?

That’s too funny. ??. And we had get up to answer the phone, use a camera with film and wait until the roll was done and wait again for it to get developed, to see the pics and you had to ask a stranger to your pic. No selfies. The struggle was real ??

And let’s not forget that the class notes could only be downloaded by copying what the prof wrote on the board using a writing utensil that disintegrated as it was used. None of this wimpy powerpoint stuff!

???classic. And this doesn’t even touch the whole registering for classes thing going table to table

It’s true. This generation of college students will never know the hardship of waiting forever for internet dial-up.

Or typing their essays up on a typewriter and using White-Out to make corrections. They will use Google instead of Encyclopedia Britannica and laptops instead of pen and paper.

They won’t know the pain of having to wait to watch their favorite television shows until it was broadcast on the 13 available cable channels.

They will never experience the racing heart as they attempt to press record and stop on the tape recorder at precisely the right moment during American Top 40 with Casey Kasem.

But they will know other hardships. They will know the loneliness that comes with a generation whose main communication is through a screen, and not in person.

They will face the pressure and ridiculous expectations set by unrealistic standards on social media. They will struggle with finding their worth outside of the number of likes they receive on Facebook and Instagram.

As one commenter pointed out, “Sure, technology allows us to not need to walk across campus to get information, but it adds a WHOLE ton of stuff to our kids lives we never had to deal with.” Things that we may never fully understand.

When 17-year-old Karis Wilson showed up at school dressed in a white turtleneck and knee-length black dress, she had no … Read More