Filter Free Parents
Home Kids Rob Lowe’s Own Kids Are Trolling Him On Instagram, And People Are...

When it comes to social media, we all try to be cool. Let’s face it- filters wouldn’t exist if we didn’t want to present our “best” side to the world, right?

Sometimes our kids are reluctant to be friends with us on social media in case we somehow threaten their online coolness factor. One seemingly innocent comment from Mom or Dad can totally threaten a kid’s online rep.

(Or you could troll your kids’ social media on purpose, for shits & giggles. I mean, so I’ve heard. It’s not like I do it. That often, anyway.)

BUT- it can go both ways; sometime our kids are the ones taking the piss out of us.

And no parent is immune to it, apparently. Not even celebrities, because KIDS.

Rob Lowe’s sons have been trolling him on Instagram, poking fun at the actor’s posts- and they’ve attracted their own following due to their humor.

Rob Lowe’s name was as synonymous with the 80s as Trapper-Keepers & jelly bracelets. His beautiful face graced the covers of Teen Beat, Bop, and every other cheesy teen magazine out there.

Lowe was in tons of movies through the 80s & 90s. And unlike a lot of teen heartthrobs, his career didn’t stall out there. He’s appeared in numerous televisions shows since, and has done plenty of commercial and voice-over work.

But in addition to his illustrious career, Lowe is also a dedicated family man. He’s been married to his wife, Sheryl, for 29 years. The couple have two sons, Matthew & Jon Owen… who are the snarky perps of our story.

People still love Rob Lowe, which is why he’s got over one million followers on Instagram. Most people, in fact, would say that he’s a really cool dude.

To his sons, however, Rob Lowe is just DAD. And they want the world to know how un-cool Dad really is.

Before you get the wrong idea, Lowe has an amazing relationship with both of his sons. In his book Love Life, the close bond between he & the boys is obvious in his heartfelt anecdotes.

In my family, you mock the ones you love. And in Rob Lowe’s family, the same rule applies. And his boys love him. A LOT.

Rob’s sons Matthew & Jon Owen have been commenting on nearly every picture that Rob posts, poking fun at their dad’s attempts to master social media.

And their snarky hilarity is gaining lots of attention- many commenters are now looking forward to Rob’s new posts just to see how his boys will respond.

And they don’t disappoint their newest fans. 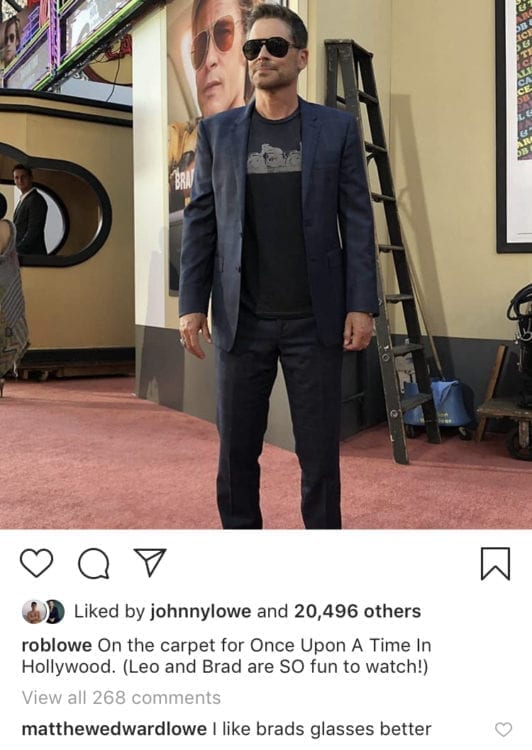 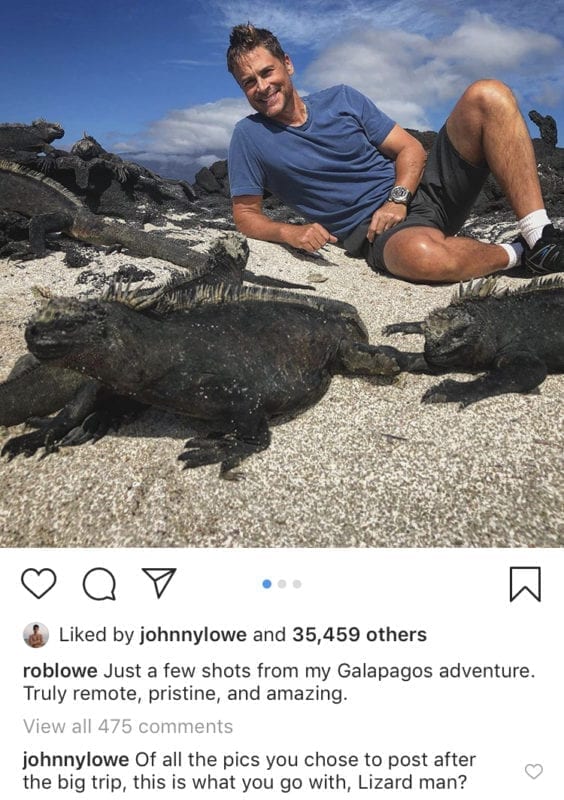 The “Lizard man” is what does it for me. 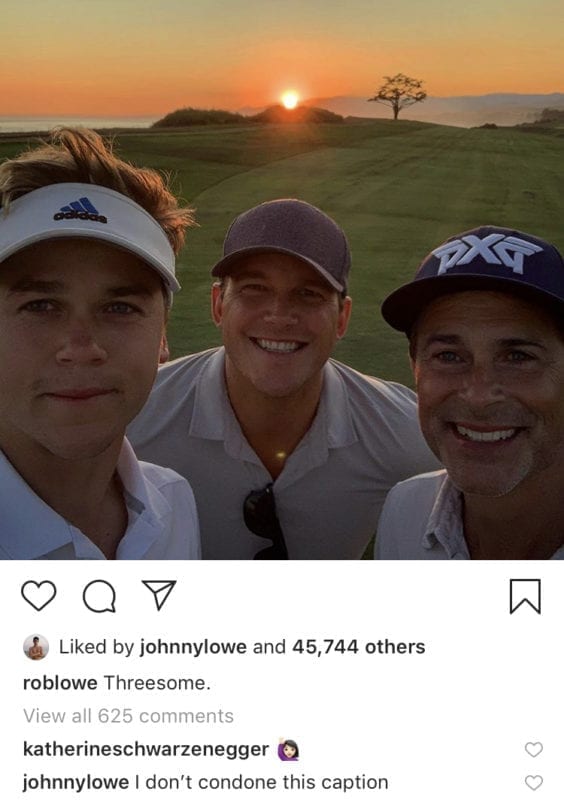 Have to agree with Johnny here… no. Just no. 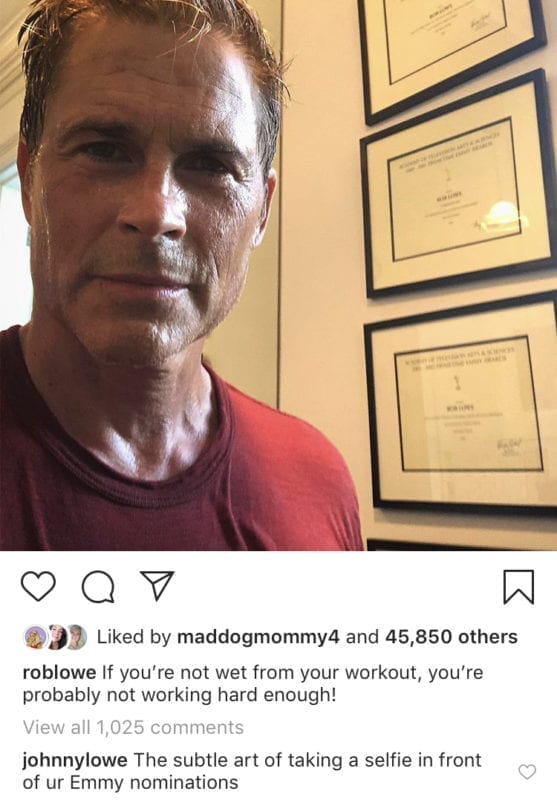 BUSTED!! And you can’t help but love the fact that his own kid is the one calling him out on it. 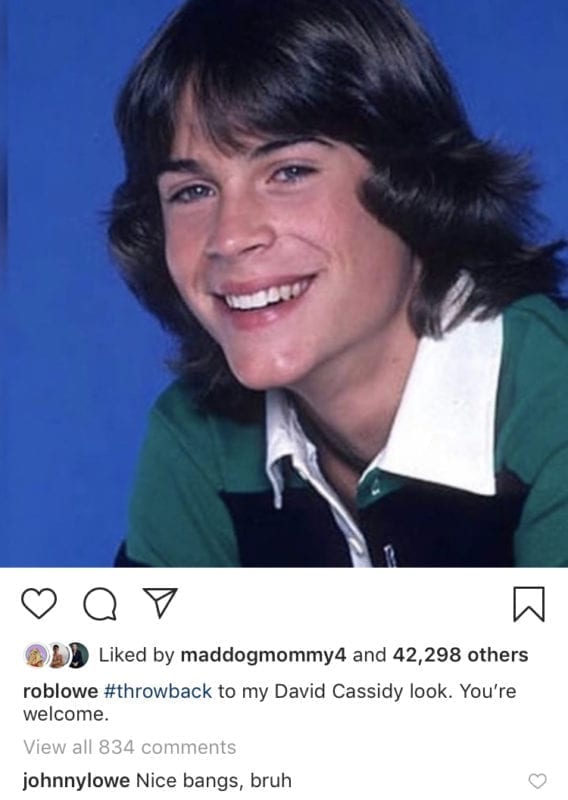 If your kid hasn’t seen a pic of you with 80s hair & ripped on you for it, are you even a parent? Granted, the hair here looks hilarious now, but Rob Lowe was a legit HOTTIE. And even celeb hotties aren’t immune to their kid’s ridicule. 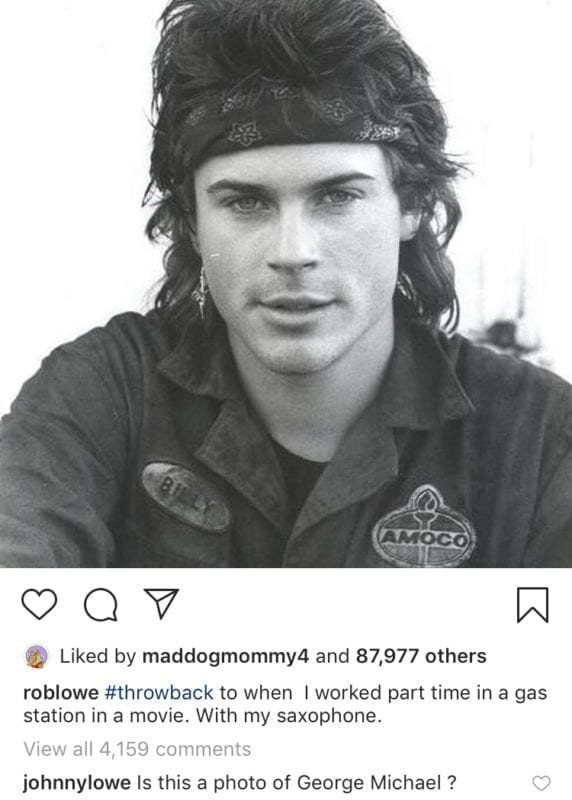 In a few short words, Johnny manages to deliver a sweet burn not just to dear old Dad, but anyone who thought this was a sweet look back in 1985. (And by “anyone”, I mean me. It’s me.) 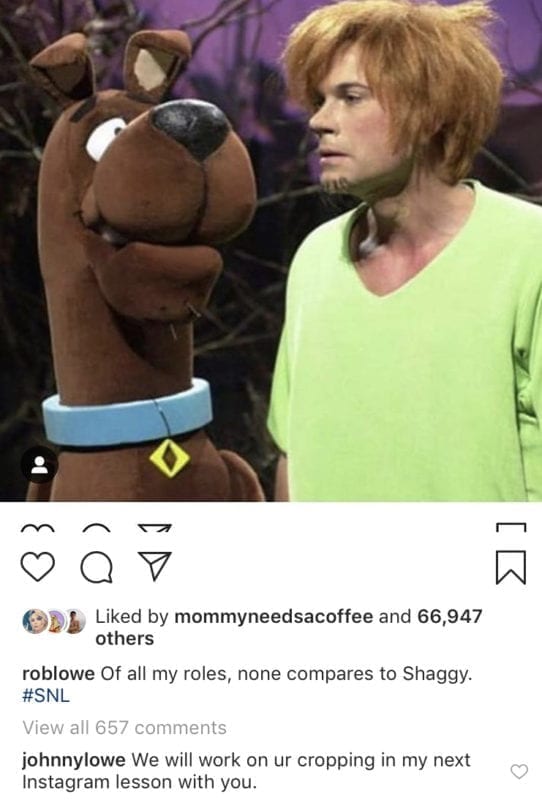 Personally, I think Johnny let him off easy here, considering how much potential mockery this one has. But he went with making fun of his dad’s less-than-masterful use of cropping (note the double hearts). I feel this one- it’s like the time I asked my teen to explain Snapchat. If you need to ask how to use the app, you’re too old to be using the app. 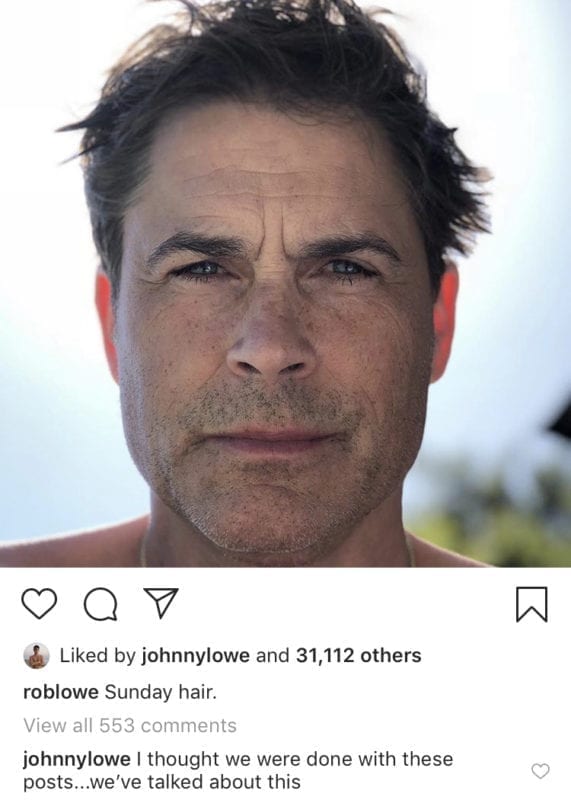 This one made me snicker out loud. I think it’s a sexy snap, and Rob’s looking good… and knows it. Or thought he did, ’til his kid came along and begged him to stop.the.selfies. 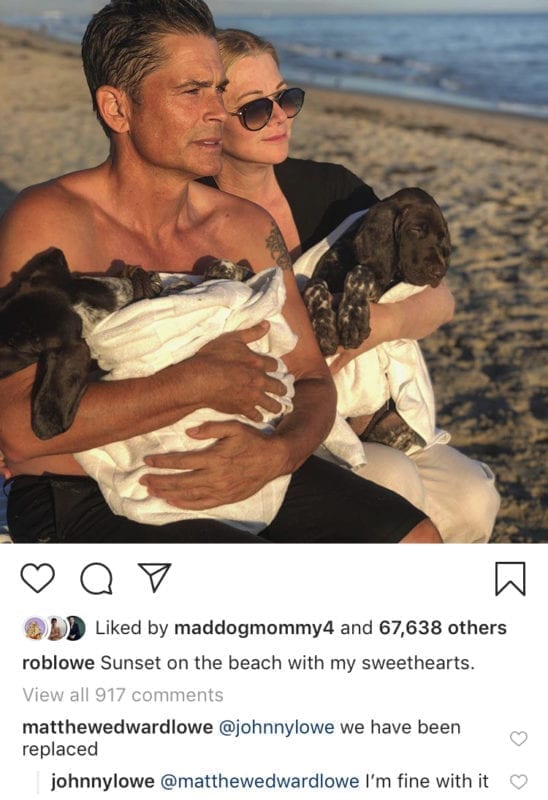 A sweet snapshot, in theory. Rob & his wife Sheryl, lovingly cradling their two dogs on a sunset-lit beach. Both boys get in on the action here; mocking their parents for loving on their “sons”.

(And publicly, which makes it so much funnier.) 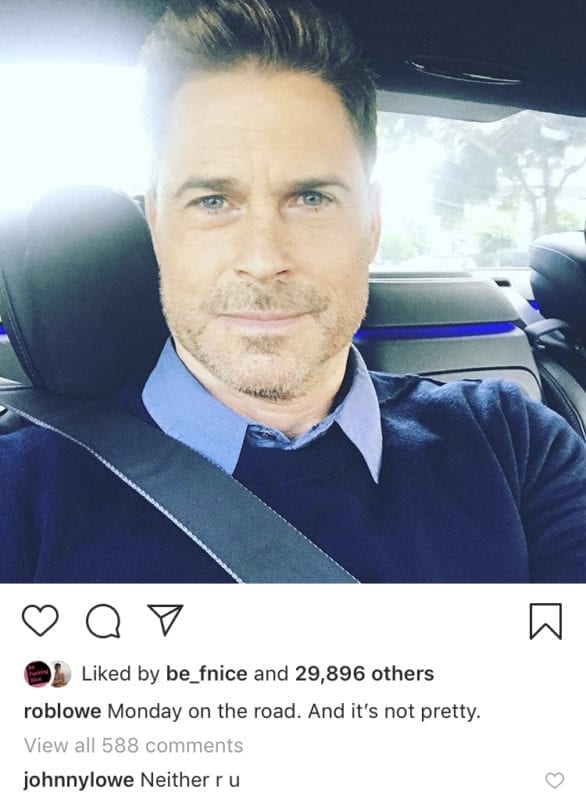 Who hasn’t been here, right? You’re stuck in traffic, looking good, & decide to fire off a selfie. Well, you were feeling good, until your kid mocks you for taking a selfie, with something along the lines of, “Ugh, Mom, no. Just NO.”

Been there, Rob Lowe. It hurts. But at least my kid didn’t tease me about it in front of 29,896 people (current likes on this pic), so there’s that. 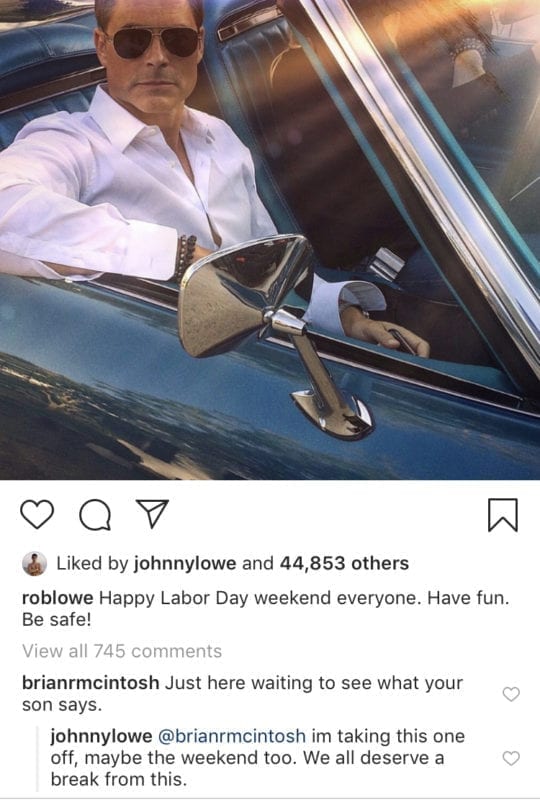 “We all deserve a break from this.” DYING.

But Jon Owen’s statement, while said in jest, couldn’t be further from the truth. I want Rob Lowe to keep these posts coming, & not just because he’s easy on the eyes, either.

Celebrities can seem so extraordinary, with lives that are so unlike the majority of us. To see a celebrity father being trolled by his kids is refreshing- it’s so real. No matter how impressive, attractive, or famous a celebrity may seem to the public, to their kids they’re simply “Mom” or “Dad”. And can be mocked accordingly.