Filter Free Parents
Home Health + Wellness Postpartum Ad Rejected By ABC To Air During Oscars For Being “Too...

The topic of pregnancy certainly gets a lot of attention, but postpartum matters often fly under the radar. For a long time, anything to do with postpartum issues was considered a “don’t ask, don’t tell” sort of thing.

You get a sense of What To Expect When You’re Expecting- there are countless books, videos, and talk about what pregnancy is like. But there’s far less discussion about what postpartum life is like, & there needs to be.

The physical reality of postpartum life is a natural part of the life-giving process, and  should be talked about more openly instead of left unspoken like a dirty secret.

Many mothers are upset after discovering that the brand Frida Mom created a movingly honest commercial for their postpartum products that was rejected by ABC for airtime during the Oscars show.

Frida Mom is a brand that specializes in wonderful products for both babies & moms. It features a line of products specifically designed for postpartum recovery, which is unique.

(Basically, these are the items you perhaps didn’t know you’d need, but thank the heavens for once you have them after delivering a baby. Those cooling pads and some healing foam mean everything when you’ve been stretched & stitched down there.)

As you watch the commercial, you’ll undoubtedly relate to most, if not all, 60 seconds.

(Seriously- didn’t that mesh underwear ROCK while you were padded up & bleeding like a stuck pig?? They were the only thing that could contain everything going on in the vag area.)

The tagline for the commercial:

Postpartum recovery doesn’t have to be this hard.

In terms of viewers, imagine how many potential consumers this commercial would resonate with. If you’ve given birth, you can immediately sympathize with the scenario.

And if you haven’t, you are definitely going to check those products out pronto!

We’re used to seeing maxipad or tampon commercials on television. We don’t get squeamish about Viagra commercials.

According to an email to Frida Moms, ABC objected to the commercial because it was:

too graphic with partial nudity and product demonstration

“Partial nudity”- interesting. Think of the sheer amount of nudity and “partial” nudity that TV viewers are exposed to on a daily basis. But this commercial is somehow showing angles that are simply too graphic for viewers? 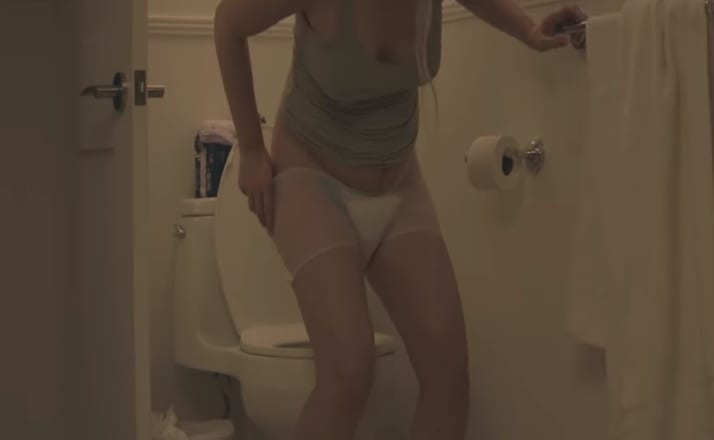 We can watch a tampon commercial that demonstrates a tampon filling up with a bright blue liquid, but a woman replacing one maxipad for another is… the WRONG KIND of product demonstration?

ABC further justified the commercial pass by stating that the guidelines for the Academy of Motion Picture Arts and Sciences (aka, the Oscar show) prohibits commercials containing:

But banning “feminine hygiene product” commercials… when at least 50% of the actual Oscar attendees actually use them? Not to mention the millions of women viewing the show from home?

The gist is, the Academy seems to think that commercials involving anything to do with any un-glamorous body aspect is simply “uncool”.

The guidelines imply that postpartum topics should be kept on the down-low. They should remain hidden, obscure, and not publicly advertised.

Actress Busy Phillips shared the commercial on her Instagram account in order to point out the hypocrisy of channels promoting erectile dysfunction ads but considering commercials like Frida Mom’s to be too “controversial”.

Like many moms, the commercial brought her right back to her own postpartum experience.

If you’ve been there, you know. And you also want other mothers-to-be to know how hard it is, but that (as Frida Moms says), “postpartum recovery doesn’t have to be this hard.”

As her caption states,

I DO believe so strongly that the more we can NORMALIZE A WOMAN’S BODILY EXPERIENCE IN MEDIA, the better off our culture and society will be. AND YES THAT MEANS ADS TOO.

This is an ad for new post partum products for women-this ad was rejected from ABC(see the repost below from the brand) I legit teared up when I just watched it. Partially because this is clearly an ad made by women who have been there and get it and partially because I DO believe so strongly that the more we can NORMALIZE A WOMAN'S BODILY EXPERIENCE IN MEDIA, the better off our culture and society will be. AND YES THAT MEANS ADS TOO. You probably don't even flinch when an Erectile Disfunction ad comes on but THIS AD IS REJECTED?! I think this is an incredible piece of advertising that accurately represents something millions of women know intimately. And I'm so fucking sick of living in a society where the act of simply BEING A WOMAN is rejected by the gatekeepers of media. Well. Shame on them and NOT on us for simply being human women. Cc: #seeher @seeher2020 #Repost ??? This is important. “The ad you’re about to watch was rejected by ABC & the Oscars from airing during this year’s award show. It's not “violent, political” or sexual in nature. Our ad is not “religious or lewd” and does not portray “guns or ammunition”. “Feminine hygiene & hemorrhoid relief” are also banned subjects. It’s just a new mom, home with her baby and her new body for the first time. And we wonder why new moms feel so unprepared.” —ad and words via @fridamom @abcnetwork

A woman’s postpartum phase is as much a natural part of life as any other commercial topic we see on TV. It shouldn’t be considered taboo, or too graphic, or too “real”.

Despite commercial rejection by ABC, the company Frida Mom is still determined to normalize the postpartum experience.

In their public statement to HuffPost, Frida Mom CEO Chelsea Hirschhorn maintains that the company will continue to not only develop products to make the postpartum period easier for new moms, but will continue to promote them:

We had hoped to share it with as broad of an audience as possible because knowledge is confidence, and a confident mother is a better, happier mother.

Seriously. If you have a better idea of what to expect of your body in the weeks after giving birth, it goes a long way to staying encouraged. It’s also vital for new moms to know that there are products out there to ease the physical discomforts.

We’ve made such substantial progress in advancing the conversation around postpartum recovery.

The rejection of the commercial is certainly discouraging, but Frida Moms is still moving full-steam ahead in their quest to normalize the realities of postpartum recovery.

New moms need to not only know that there are products available, but that there’s no shame in discussing them. If our society can handle television that’s chock-full of sex, nudity, etc, then we can certainly normalize the sight of a peri-bottle and mesh underwear.

People Magazine just crowned Paul Rudd 2021’s Sexiest Man Alive and all I can say, is what took them so … Read More