As parents, we do everything humanely possible to keep our kids safe. We child-proof our houses, select our babysitters & childcare with great scrutiny, and stay vigilant as to our children’s whereabouts.

But all it takes is a split-second for a tragic accident to happen. And sometimes, despite our best efforts to protect our children, there are others around us that don’t exercise the same caution.. resulting in a devastating outcome.

A little girl tragically lost her life after she was hit by a car near a public soccer field, and her grieving parents hope to use the tragic incident to encourage people to pay more attention to their surroundings. 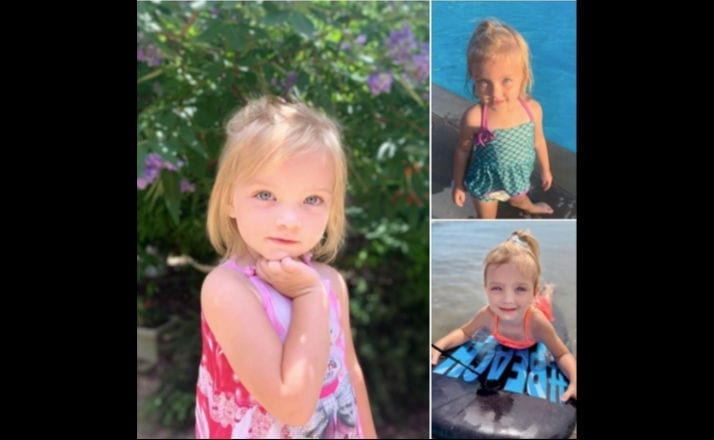 Three-year-old Allie Estelle was accompanying her father, Chris White, to watch her older brothers’ soccer games at a local park in Round Rock, Texas.

It happened so quickly. But it could have been prevented- if the driver had only been paying more attention. And if she’d been driving more slowly.

Chris applied sunscreen to Allie as her brothers ran onto the field. Though he was deliberately keeping her close by, she broke away & began to run to catch her brothers on the field.

Any parent of a toddler has experienced this moment. The one time when even as you  hold your child’s hand, they manage to squirm out of your grasp in a split second & take off. It’s a scary feeling…. even when you manage to catch them before any harm is done.

This wasn’t a case of a child having free reign of a parking lot. It’s crucial that this is made clear, because some might be quick to assume she “wasn’t supervised”.

This wasn’t a situation where a parent wasn’t being vigilant. Allie’s father Chris was literally with her the entire time– and for a mere few seconds she managed to pull away to run.

There was a car driving toward the parking lot that was nearing the direction in which Allie ran. It was driving fast- too fast for an area that kids are known to be. As Chris explained to news station CBS Austin,

I started screaming and ran after her. And within a matter of two seconds, my poor baby was kind of knocked over with the front fender.

Despite Jamie’s screams, the driver had not even slowed after Allie initially was struck by the front of it.

And I was screaming and telling them to stop. I was reaching to grab her, [and then] the back of the vehicle went right over her.

And although Chris kept screaming, the driver was STILL not aware that she had run.over.a.child.

This horrific scene occurred right in front of her own father’s eyes.

According to both Chris and onlookers, the driver had appeared to be preoccupied with her cell phone, & was driving extremely fast.

Despite the frantic efforts of bystanders to revive Allie, she died at the scene.

It’s a painfully hard thing to even read about, isn’t it? I cried just looking at Allie’s beautiful little face. But the event that is difficult for us to stomach is now Chris and Jamie White’s reality.

I experienced a lot of emotions while reading Allie’s story. I was devastated that fellow parents should have to feel this much pain. I was angry -SO angry- that the driver wasn’t being more cautious when driving near a park.

Even if she had glanced at her phone for only a second, her speed mattered too. While it wasn’t “technically” speeding, it was fast enough to be dangerous around small children.

I wished I could hug away the horrific image Chris must have in his head of the accident happening right in front of him.

I wanted to cry with the Whites, to learn everything I could about their sparkling, sweet little girl that was ripped from their arms.

I’m so broken by their loss, simply because as a fellow parent, we can imagine how we’d feel if it were our baby. When you’ve done everything “right” to keep your child safe, & one person’s carelessness takes her away.

But despite the immeasurable grief they feel over the crushing loss of Allie, the Whites want Allie’s pictures shared.

They want people to know the story of her tragic death.

The White family is asking that Allie’s story be shared as a message to drivers to pay attention to their surroundings, especially in areas that children frequent.

Allie’s life could have been spared if the driver had not glanced at her phone, and if she had just slowed down and paid attention.

Allie’s family will NEVER be the same. There is no recovering from a massive, heart-crushing loss like this. If just looking at Allie’s pictures can bring tears to your eyes (as it did for me), try stepping into her parents’ hearts & minds.

It’s so simple. We can minimize our glances at our phones in areas where pedestrians could be. People can stop tearing around schools (despite the posted slower speed limits), school bus stops, and public parks.

Your need to get to your destination is not more important than anyone else’s life. PERIOD.

We can do better than this. We can all learn from Allie’s tragedy. We can all make more of an effort to stop looking at our phones as much as we do. We can deliberately drive more carefully in parking lots and around locales that children are known to be.

The cost of NOT doing it is simply too high. And it’s an excruciating price to pay for any family.

Jamie and Chris White hope that no other family ever has to suffer the senseless loss of a child as they have.

And that’s why they courageously have gone public with their story- in the hopes that it will show people what’s really at stake when driving near public parks and schools.

If we could help people change a little of their habits to be safer, then there’s positive coming out of this.

The White family has had their “little gift from God”, as her obituary described Allie, unfairly taken from them. It didn’t have to happen.

And no one would ever, EVER want to be the accidental cause of such agony for another family.

“…something positive can come of this gut-wrenching tragedy. If Allie’s story encourages drivers to minimize their distractions & phone use while driving, then other innocent lives can be spared.”