Anyone who has ever taken a young child out in public knows what a shitshow it can be. There is nothing more stress-inducing than trying to wrangle a child whose sole purpose is to go anywhere where you are not (lord bless them.)

So you do what you can to corral them and keep them safe.

Sometimes this means using the one-handed death grip, strapping them in a stroller, or, getting a bit more…creative.

In a viral video, Kentucky dad-of-five Jordan Driskell leashes his 5-year-old kids while on an outing at an aquarium…and “unleashes” a tsunami wave of controversy.

Driskell, who shares quintuplets – Zoey, Dakota, Hollyn, Asher and Gavin – with his wife, Briana, originally posted the video last year but it is just now blowing up the internet.

In the video, Driskell is seen “walking” his brood.

The kids are each wearing animal backpacks with a tether attached.

Hilariously set to Doja Cat singing “You ain’t nothing but a dog, playa,” Driskell captioned the 5-second video:

“Come walk a mile in my shoes.”

Since being posted it has garnered a whopping 3M views, 175K likes, and 5K comments.

I applaud this dad. He was out, ON HIS OWN, with FIVE CHILDREN. FIVE. He was grossly outnumbered.

I’ve got twin boys. When they were toddlers it was like trying to herd cats. (Who am I kidding, it’s still like that.) It’s as if they’re both the north ends of magnets and all they do is repel each other – clear in the opposite directions. If I’d had a leash, I would have used it.

I see nothing wrong with doing something to keep your children safe and preventing them from running amok like the Tasmanian devils on crack they can be. Plus, the kids don’t seem to mind.

But want to know who does mind?

All the perfect parents and non-parents out there who just.can’t.help.themselves.

They’re 5. Have you met a 5-year-old? I have. They’re crazy. And they’re going to 5-year-old allllll over the place, whether you want them to or not.

Unless, of course, you’re this woman’s 5-year-old, apparently.

Yeah, because giving death stares and threatening to beat your child with a flip-flop is definitely “Psychology!”

Who says he isn’t? But as the saying goes, Rome wasn’t built in a day. And neither are kids.

Driskell is at a venue where kids are easily distracted and lost. It literally takes less than .003 milliseconds of turning your back for one (or more) of them to disappear.

But yeah, go ahead, shame and complain about a parent just trying to enjoy spending some time out and about with his kids.

As for what Driskell has to say about it?

In an interview with TODAY Parents he defended himself, saying:

“Kids are so curious — they want to run off and explore. For our own peace of mind and sanity, we use a leash.

It also allows us to leave the house and do fun stuff as a family without being stressed.”

Sounds perfectly reasonable to me.

And there are plenty of commenters who agree.

For every commenter raking Driskell over the proverbial coals, there are just as many (if not more) who came out in support of his choice.

Even the experts don’t disagree with his approach. At least, not all of them anyway.

“This is creative problem solving. This isn’t treating kids like animals. The alternative would be just staying at home.”

However, while she may not have a problem with it, as with everything parenting, other professionals do.

“As a pediatrician, I’m not happy to see children leashed like pets.

As the father of three, I am well aware of how quick, impulsive, and unpredictable kids can be.

But from an injury standpoint, I would worry about entanglement or choking — we know the risks of other loose ‘cords,’ like on window blinds.”

Whether you are team-tether or not, the reality is this: these parents have 5 children. All of which just so happen to be the same age. I can’t even imagine how difficult it is to get them all to find their shoes, never mind taking them out in public.

So if they want to leash their children? I say, go for it. Do whatever works for you and your family.

As for our own Meredith Masony? She had some thoughts and weighed in on the debate as well.

Check out what she had to say about it here: 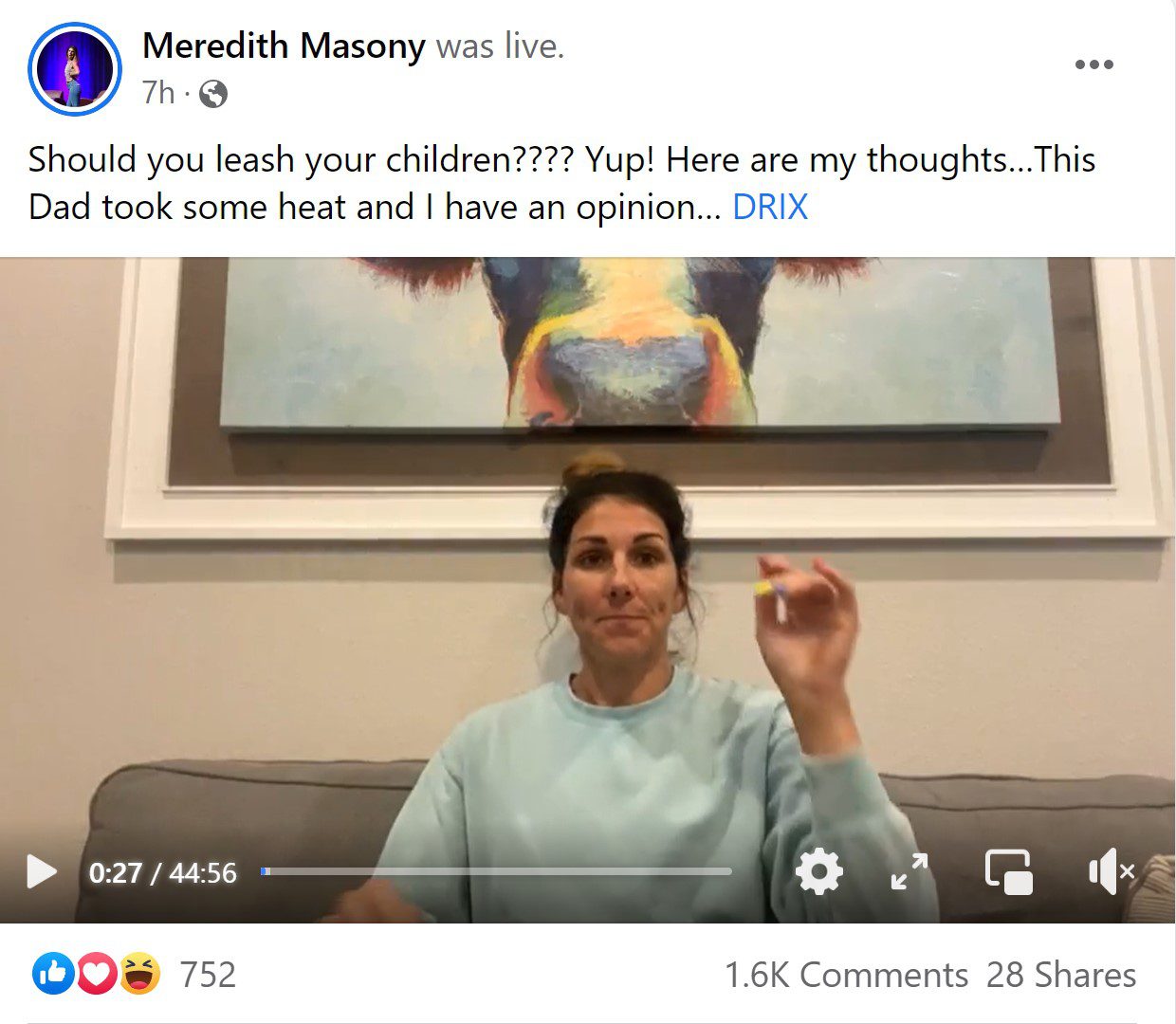