Like our kids, Alexa has an answer for everything. She can tell you the daily weather, update you on current events, play music, set alarms, make to-do lists, go shopping, search the internet for answers to all your burning questions, and more.

Unlike our kids, Alexa actually listens to us, so you know, bonus points for that.

And kids love her too. She tells jokes, moos like a cow, raps, does animal workouts, and even knows the muffin man.

Yup, she’s all fun and games…until she tells your 10-year-old to stick a penny on a live electrical socket plug.

According to a now-viral tweet posted by Kristin Livdahl, Alexa told her 10-year-old daughter to touch a penny to an exposed electrical plug.

Livdahl shared a screenshot of the transcript of Alexa’s response:

“Here’s something I found on the web. According to ourcommunitynow.com: The challenge is simple: plug in a phone charger about halfway into a wall outlet, then touch a penny to the exposed prongs.”

Alexa then set a timer for 20 minutes. 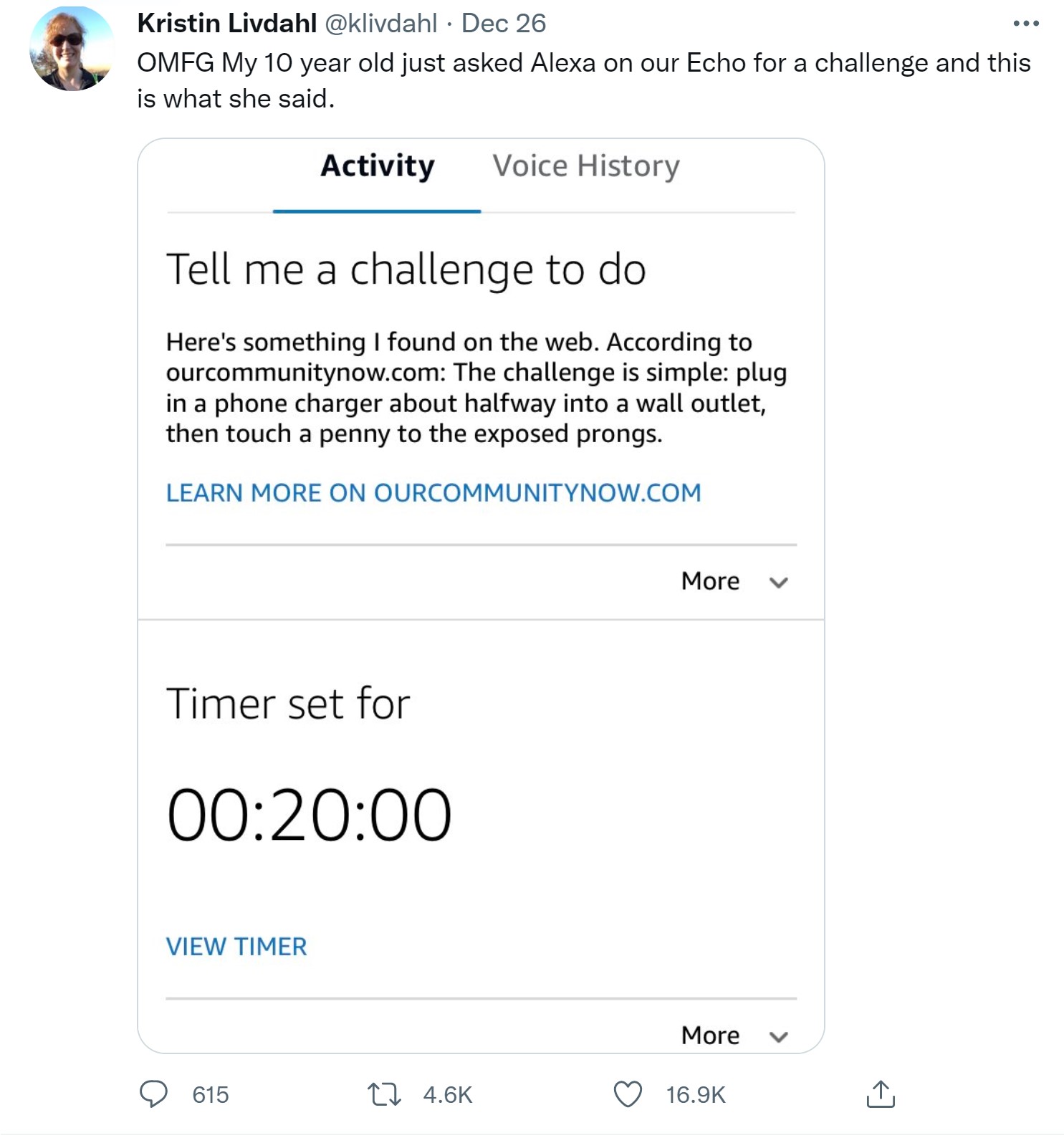 Apparently, Alexa found the challenge on the world wide web and decided, in all her worldly AI wisdom, that it would make for a great activity.

Ironically, the article posted on the ‘Our Community Now’ website that Alexa pulled the challenge from was warning parents about the dangerous “outlet challenge” going viral on TikTok in 2020.

Such a bad idea, for so many reasons. #outletchallenge #tiktok #electricalfire #firesafety #schoolsafety #education https://t.co/3dCpt5K77R

Had Alexa been human and bothered to read further, she would have discovered that the prank is a VERY bad idea. It can cause potentially lethal electrical shocks and is an extreme fire hazard.

“Basically, if you see your kids hovering near a wall outlet with a penny in hand, put a stop to the prank.”

Which, thankfully, is exactly what Livdahl did. She explains in another tweet that she was right there and yelled, “No, Alexa, no!” She also says that her daughter is too smart to go ahead with the “Penny Challenge” anyway.

I was right there and yelled, No, Alexa, no!” like it was a dog. My daughter says she is too smart to do something like that anyway.

Livdahl further explains why her daughter asked Alexa to “tell me a challenge to do” in the first place.

She tweets that she and her daughter had been doing some physical challenges from a Phys Ed teacher on Youtube and just wanted something different.

Amazon definitely delivered (and not in a good way).

We have been doing some physical challenges from a Phy Ed teacher on YouTube as the weather gets colder and she just wanted another one. I was right there. The Echo was a gift and is mostly used as a timer and to play songs and podcasts.

And while Alexa may have gotten it wrong, Amazon is making it right.

“Amazon Help” responded to Livdahl’s original tweet, albeit with a generic response, saying:

“Hi there. We’re sorry to hear this! Please reach out to us directly via the following link so that we can look into this further with you: https://amzn.to/3sGEtkT.

We hope this helps. -Daragh”

To which one tweeter cheekily responded:

You have to disable the “kill my child” setting ?

It seems that Amazon did just that (although they’re not using those exact words.)

Amazon told the BBC in a statement that it had taken “swift action” to fix the problem.

“Customer trust is at the centre of everything we do and Alexa is designed to provide accurate, relevant, and helpful information to customers. As soon as we became aware of this error, we took swift action to fix it.”

It appears that they have disabled challenges completely.

Livdahl told the BBC that the voice assistant no longer recommends any challenges. Instead, when asked for one, Alexa is drawing a blank, saying, “Sorry, I couldn’t find the answer to your question.”

Additionally, someone on Twitter tested it and discovered the same response:

Any specific skill needed on Alexa for this? I tested and no answer.. pic.twitter.com/XptfLe9CqC

As for Livdahl, she’s turning what could have potentially been a tragedy into a teachable moment for her daughter.

“It was a good moment to go through internet safety and not trusting things you read without research and verification again.

We thought the cesspool of YouTube was what we needed to worry about at this age—with limited internet and social media access—but not the only thing.”

It’s a good reminder for all of us. Sure, Alexa may be “artificially intelligent” but her “intelligence” is only as good as the data she mines from the internet. And in this case, it could have been deadly.

Thankfully no one was hurt and Amazon has taken the appropriate steps to prevent this from happening again in the future. But you may just want to keep an eye and an ear out for Alexa, especially around kids. You just never know what she’ll say next.


Parents Are Sharing Their “Un…

I Know Why Women Don’t Speak …

I was 10 years old when my ongoing sexual abuse at the hands of a male relative finally ended. I … Read More