When looking to order up a tasty dish most people tend to turn to Uber Eats.

However, it seems that some women are choosing to forego the food delivery apps in favor of dating apps when it comes to getting dinner.

That’s right friends. Never mind scoring your soul mate on Tinder, how about just scoring a free meal instead?

According to recent studies, women are swiping right on people they have zero romantic interest in, just so they can go on a date and eat for free.

Let’s play a little game of “Have You Ever” shall we? How many of you have ever done this?

Because if the results of the studies are any indication, up to 33% of ya’ll have traded dates for beefcakes. (Of the edible variety, you dirty birds).

In a clip from The Daily Show, correspondent Dulce Sloan gave some insight into what’s going on in the dating scene these days, saying:

“Studies show that a third of all dates are just people trying to eat for free.”

(I mean…have you seen the rising cost of food these days?? Priorities, people.)

As for that eggplant emoji? It doesn’t always mean what you think it means.

Sometimes it really is alllll about the Eggplant Parmigiana and has absolutely nothing to do with…I know you know.

Free Meals > Relationships. @dulcesloan breaks down the “Foodie Call” and what that eggplant emoji might really mean. pic.twitter.com/0BfdMX8eOh

The studies in question were published in the journal Social Psychological and Personality Science.

In the first study, 820 women were recruited by researchers at Azusa Pacific University and UC Merced.

The women answered a series of questions that measured their personality traits, beliefs about gender roles, and their foodie call history.

The results? 23% admitted to engaging in a foodie call.

In the second study, 357 heterosexual women answered a similar series of questions. This time, researchers found that 33% of the group had swapped a date for a plate.

The post has gone viral with nearly 1M views, 33K likes and 800 comments. 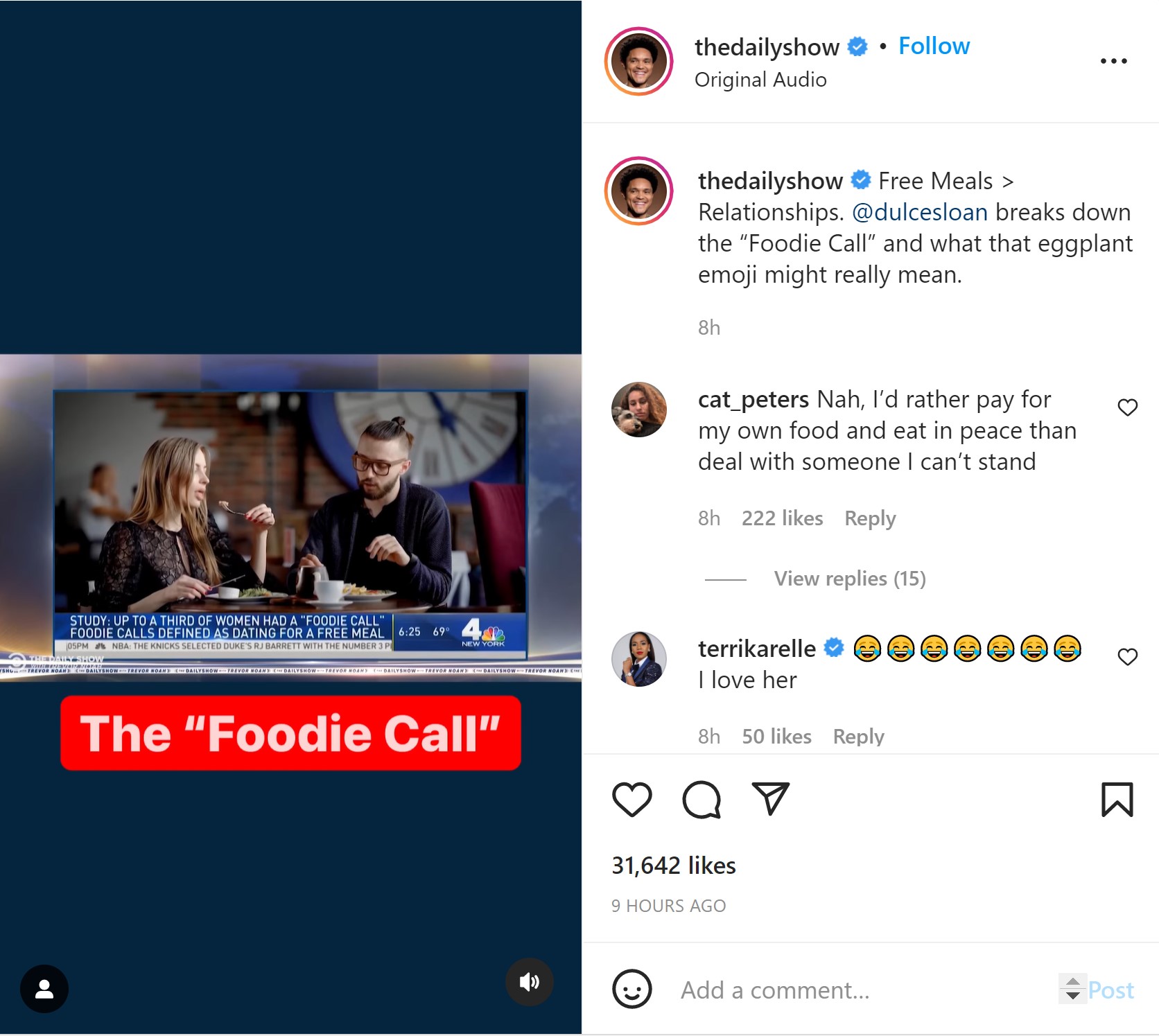 …others admit that they’re guilty of a foodie call or 2.

Apparently, she’s right about this not being a new thing.

According to one commenter it used to be referred to as a “Burger Boy,” back in the day.

And nowadays, with gender pay inequality still being an issue, not to mention the rising cost of food, some women have absolutely zero qualms with going on a foodie call.

Of course, some men took issue with it. Understandably so.

And came up with their own solution to avoid falling prey to culinary exploitation.

Additionally, one woman did point out that this doesn’t just happen to men, it happens to women too.

As for what the love experts say? Peter Karl Jonason, an affiliated professor at Florida Atlantic University, who was not involved in the studies but who has researched love styles thinks “Meh, a foodie call isn’t a big deal.”

In an interview about the studies with Newsweek, he said:

“In short; get over it. Women exploit men. Men exploit women. These are not necessarily pathologies but can be the result of recurrent selection pressures in what you could call the battle of the sexes.

Both sexes have goals that are sometimes in conflict with the opposite sex and they have developed—both evolutionarily and ontologically—tactics to extract what they need.”

And what some women really need right now? Isn’t a relationship. Oh no. It’s a bottle of fine wine and a three-course meal, apparently.