Filter Free Parents
Home Health + Wellness My Daughter Got Her First Period, But She Won’t Talk To Me...

Around five months ago, my daughter got her period for the first time. She was 11 and a half, which according to my research is a little younger than average. The day she got it, she had been at school and had to stay there until dismissal because she’s not allowed to use her phone to call me and she was too embarrassed to go to the nurse.

This was definitely not great circumstances in which to be introduced to this next stage of life. When she got into the car after school at the bus stop, she whispered, almost inaudibly (even though we were the only ones in the car), that she had gotten “it.” I could tell by looking at her that she was mortified.

Although I was a little in shock, my instincts kicked in and I tried to stir up some excitement. Smiling, I proclaimed, “that’s so amazing! Don’t be upset, we should be celebrating!” She looked at me in disbelief. Undoubtedly, she did not feel like rejoicing about this new milestone. 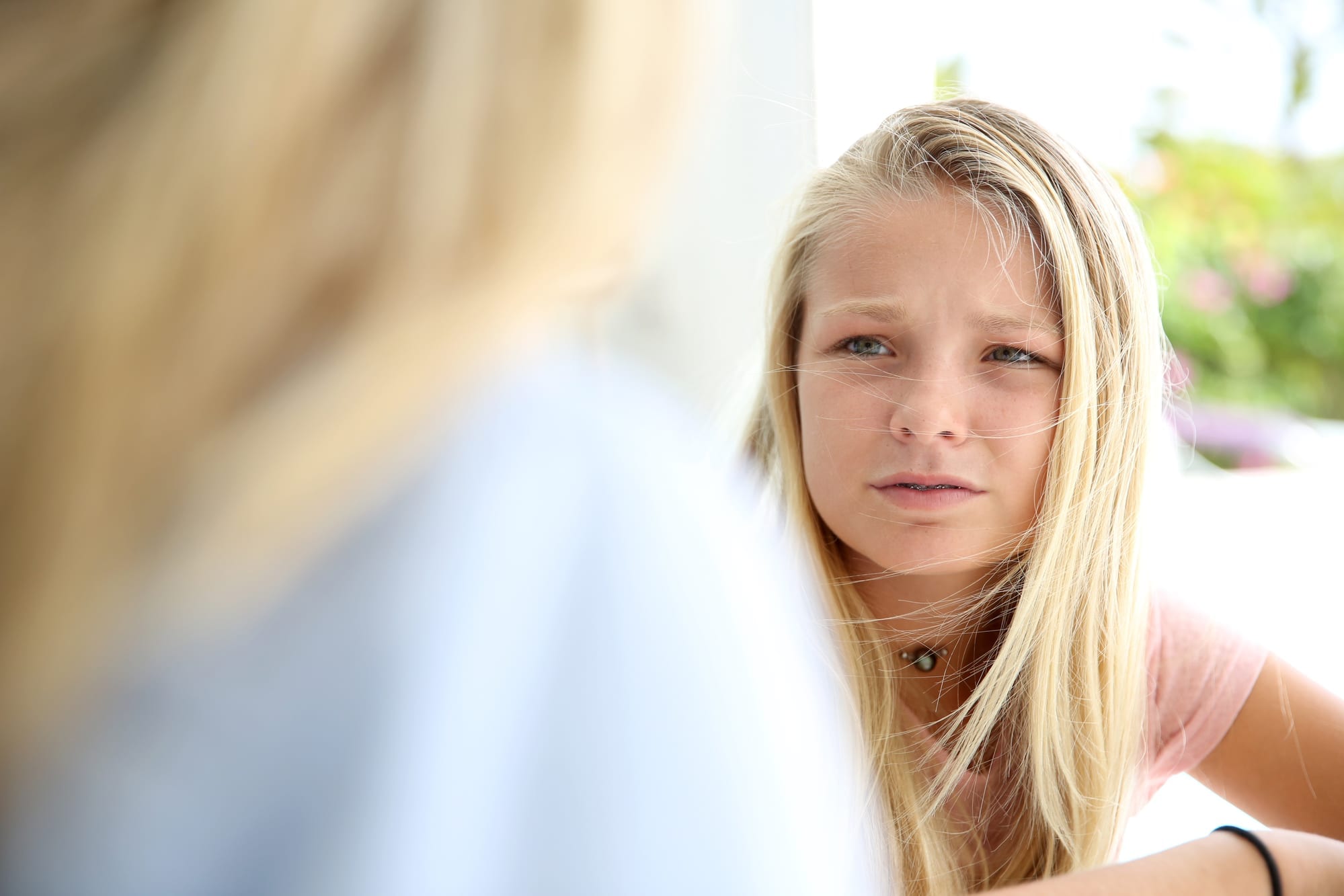 I told her she could take the following day off of school and we would do something fun, just us girls. She perked up a bit knowing she would be playing hooky, but was no more willing to discuss and observe the occasion. I tried to use our alone time to get her to talk about how she was feeling, asking her what kind of questions she had. It was a great girls’ day, but I was repeatedly failing to make her any more comfortable or proud of this transition.

Over the next few months, I held onto hope that she would loosen up and might slowly creep into a more relaxed state-of-mind. Repeatedly, I encouraged her to open up to her few friends who could relate. I felt desperate to try to break the ice.

If I couldn’t connect with her, how would I get her to open up to me about other physical changes she was about to encounter? I wanted to be the one to teach and guide her through the coming of age process. I wanted to bond with her over the traits we shared as the only two girls in our household. But still it was all with no success. I never dreamt that I would have a daughter who would be so uncomfortable with her feminity, but yet here I am.

It’s not just about her period. Anything involving puberty makes her abnormally uncomfortable. This is all so foreign to me because my husband and I are so open about these topics, and we encourage any questions our kids might have. I understand that no tween wants to hear about certain topics when it comes from her parents, but I would also think it would help just to know we are open to discussing anything at all.

Instead of opening up, however, she basically does the opposite, placing her whole life on hold for that week every month. She won’t sleep at friend’s houses, go to parties and sometimes doesn’t want to be with friends at all.

At this point I am trying and exhausting all of my options. She refuses to allow me to read books with her or buy her the books my mom bought me when I reached puberty. Any feminine product gets hidden deep in the back of her closet out of fear that someone might see and know her humiliating secret: that she goes through something that every single female experiences.

My heart sinks when I think about the amount of discomfort and embarrassment she feels about something so natural that universally connects all women and makes her part of such a special and magnificent group.

Maybe it will get better as time goes by, but if it continues like this, the next five years could be just one awkward mom/daughter encounter after another. I certainly hope not. Unsure of what the next step is, at this moment I will keep attempting to keep an open a line of communication between us, hoping that there will be a moment she is suddenly ready to take me up on my offer.

With a more introverted personality than my own, I know that she has a strong need for personal space and a larger allotment of time in which to deal with certain events. Hopefully, with extra patience and perseverence, I will witness it all transform into something more positive and meaningful for her. Until then, I am doing my best to adhere to her personal journey the best way I know how, rather than forcing it to be the other way around.

Principal Makes The Best Of A …


Toddler Cooks All By Himself; Spark…