Laura is a comedian who has gone viral with her short skits created through Facebook and Instagram. She has a number of original characters in her videos, including Pamela Pumpkin, IVY and Laura Flirts. She has acted in a number of short films-called Stranded, The Hitchhiking Game and How Deep Is the Ocean. Laura is also an author- Idiot: Life Stories from the Creator of Help Helen Smash 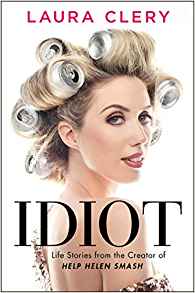 Section Intro: Every parent has a different idea as to how to raise their children. Each parent will discipline, play, teach, and raise their children in a unique way. Some parents spank, others don’t believe in time-outs. Many parents believe that they need to hover over their children at all times so that their kid doesn’t get hurt while other parents give their children space to help them grow on their own. One new parenting technique is quite controversial and has parents debating about whether it is good, or detrimental to the child’s learning.

A new television show has come out where it follows parents who are training their children like dogs. That is exactly what the show is called, Train Your Baby Like A Dog. The parents are using doggy clickers, harnasses and even giving their children treats to acknowledge their positive behavior. One mother shares how she is training her child much like how she would train her dog to be obedient and how she is helping other parents do the same. The woman says she has been training dogs for many years and so she decided to use the same techniques in order to raise her toddler.

Many people are against this form of parenting. One negative argument about the training is that children might be more likely to be victims of pedophiles. In this “training program,” children are rewarded to do what the parents want regardless of whether or not they feel comfortable in the activity. Much like dogs, children are taught to do something like “sit” and the child would get rewarded for doing the activity. Parents are concerned that children trained under this program might do something just because an adult tells them to regardless of whether it is comfortable for them.

In the hour-long episode, Jo-Rosie, the trainer, worked with two children, three-year-old Greydon and Dulcie, 18 months. She puts them through the training alongside her dog who is trained to work with children. She is so involved in dogs that she teaches the parents why their kids are doing what they are doing based on what she knows about dogs. In one part of the episode, she rewards Dulcie with a piece of chocolate for entering and exiting the bath without making a fuss. She then shows the parents how her own son is trained in the program. She firmly says, “Santiano, down!” To which her son sits down alongside the other dogs. As the show opens, she says: “If everybody parented their child the same way we did our dogs, then we would end up with much more confident, compassionate and curious human beings.”

Section Intro: There’s no denying that we moms put a tremendous amount of pressure on ourselves to meet the needs of those we love. We constantly work hard, sacrifice, and often battle a lot of self-doubt on how good of a mother we may think we are. While we all have a subconscious image in our heads of the ideal type of mom we strive to be, social media can add to the guilt and doubt

Mom Ashley Gibson was in the throes of labor with her third son, & was in absolute agony. She was debating whether she should opt for an epidural or not, because the intense pain was becoming too much for her to handle.

As she tearfully debated the idea, her husband spoke four powerful words to her:

And he’s absolutely right. There’s no “winning” way to deliver a baby. Ashley’s husband gave her permission in that moment to give herself a break; he reminded her that she didn’t have to prove anything to anyone by giving birth sans epidural if it was too much for her.

While his words were obviously meaningful in the moment, they apply to far more than just childbirth.

Ashley describes in her post that the idea resurfaced as she battled a hefty amount of guilt over supplementing her newborn son Leo’s feedings with formula.

And once again, her husband’s words resonated in her mind: “There’s no trophy Ashley”. The self-imposed sense of failure that the breastfeeding wasn’t going the way Ashley imagined it was “supposed” to go had no place there.

We can achieve standards and awards in many areas of life- sports, work, academic society, etc. But in terms of motherhood, there are no trophies given for doing things the way we think others expect us to.

Likewise, there is no need to feel “less than” if we don’t do things the way others supposedly do it.

How many moms have been in Ashley’s birthing situation and felt this very same way??

I literally thought in that delivery room that I would somehow be “less than” as mother for tapping out and asking for the drugs.

That’s a LOT of unfair pressure to put on yourself- to feel like a failure right out of the parenthood starting gate simply because you didn’t give birth the way you…”could have”, “should have”, “like so-and-so did”.

Yet we moms do this very same thing in so many areas of our parenting:

Like there would be a gold medal or AT LEAST a gold sticker on my medical chart for having a natural birth.

[Tiffany] Section Intro: Abby Jimenez recently shared this story on social media that quickly went viral and it might be the best thing that’s happened to Facebook since Zuckerberg himself. Also, I just can’t stop fucking laughing.

So last night my husband took some Ex-lax. Then this morning, some shit started giong down. Like, literally. He looked at the packaging and realized that when it said to eat 1-2 squares, it meant the tiny squares, not an entire block.

(Husband, baby, I can see where the mistake was made. With that whole block of chocolate wrapped up like one dose, and it flipped backwards like it was, I get it. But good Lord, I can’t even with this.)

So I’m calling Poison Control because he thought he was dying and I literally cannot stop laughing. I’m barely able to talk, I’m laughing so hard. The guy on the other end probably thought it was a prank call. I swear to God, I hope they record their calls and enjoy that one at the staff meeting later because even thinking about me trying to explain that my 39 year old husband just ate a whole brick of Ex-lax is making me wheeze.

The guy was like, “The biggest risks are cramping, dehydration, and diaper rash.”

??????????????? I was NOT ready for this dude to come at me with diaper rash. I completely lost it. My husband was so pissed (from the bathroom of course). The Poison Control guy kept chuckling and going, “Oh boy. Oooooooh boy. You’ll need to get some Desitin.”

I am not equipped to deal with this kind of crisis. I know it could have been super serious, but OMG

And the funniest part of all is he thought he only took a half dose because he only ate one bar ???

He’s going to be fine. I’m still crying. I can’t even drink my latte because I keep choking thinking about it and spitting my coffee back into my mug. I had to lay down sideways in a restaurant booth because I was laughing so hard I couldn’t breathe, three full hours after this happened. I kept clearing my throat on the call with Poison Control like, “Ahem. Okay, I know this is serious. Please continue. AHAHAHAHAHA!!!”

He let me share this story. I have no idea why. All I know is it’s a gift to the universe.