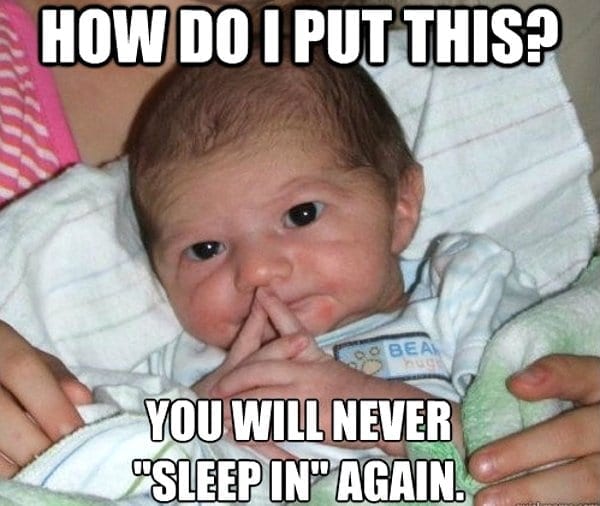 I thought I knew what it would be like to have a child. I had earned college credits in early childhood education, worked in preschools, and been a nanny. Hell, I had a Doctorate degree in Psychology. Having kids couldn’t be harder than that? Sure, I had heard about sleep deprivation, but that gets better after three months, right?

Fast forward many (many as I am now “advance maternal age”) years. Here are some of the things that no one told me, or (more likely) the evolutionary strategy of not-hearing-reality-in-order-to-propogate-survival-of-the-species prevented me from hearing:

“Not enough” meant six hours or going to bed late after a date. The bed was spacious, cozy, dark, and quiet. If sharing the bed, it was with an adult that didn’t kick you in the face. Ability to sleep late? At least sometimes, was a given.

I think the picture says it best.

If co-sleeping, frequent toddler kicks to the face. Nightlights, constellation turtles, cheesy lullabies, dolls, bears, and yes, even cars/fire trucks crowding in and around the bed are a given. Six hours is a fabulous miracle never ever EVER to be taken for granted.

Some body image concerns (desire for larger or smaller), sexy or neutral part of the body, modesty in public.

Large boulders that are so mammoth they are bigger than your baby’s head. Mastitis, clogged ducts, difficulty latching, cracked nipples. Modesty in public is long gone. You whip them out to feed the babe anytime and anywhere. There is constant worry about too much or too little milk supply and everything is scheduled according to when-is-the-next-feeding. If working outside the home, pump in the car or the office bathroom. Lactation consultants and babies are allowed to touch…partners keep AWAY from the feeding parts. If not breast feeding, you obsess about using the right formula, using the bottle, not using the bottle, or using the bottle sometimes…it never ends.

Blissful wandering of the aisles, in and out of stores, try on clothes leisurely. At grocery store, read labels for hours on end, compare prices, have a list, do not worry about avoiding treat aisles or anything at toddler eye-level. Go during many windows of available free time: evening? weekend? lunch-time? Spontaneously whenever?

Grocery shopping: Throw things into the cart as quickly as possible on trips scheduled in between feeding or nap times. Have large diaper bag filled with distracting items, snacks (yes, bring snacks TO the grocery store), extra clothes, diapers, etc. Obsess about organic food, BPA-free containers, the latest reports on lead levels in sweet potatoes. Be ready to abort mission at any time due to the window of tolerance for hunger, sleep, or blow out poop levels abruptly closing in.

RESTAURANTS and GOING OUT

Try out new restaurants with partner like an adventure. Say “Hey! Let’s try out that new restaurant!” And then the next day “We could go to the other one!” In fact “Let’s go out together spontaneously every night!”

Date nights: Hire babysitter and pay $100 to go see a movie and or drink a glass of wine. Check phone every three minutes to make sure no calls or texts from babysitter. Get in a fight with partner.

WORK (Outside the Home):

Attend every day, occasionally whine about it with colleagues, get excited for a break after it is done. Take for granted that lunch and bathroom breaks without child attached to you are a given.

Stress about how your child/ren may be affected later by this “abandonment.” Determine the quality of your day by whether they adjusted easily or with difficulty at drop off. Blame yourself either way (easy drop off: do we have insecure attachment? Difficult: should I start their future therapy fund now? Should I quit my job?) Feel a hole in your heart around this. Meanwhile, luxuriate in the ability to go to the bathroom without any small children attached to you and eat lunch without having small fingers reach onto your plate and steal food or put crusts and chewed up apple skin on it.

WORK (inside the home):

Clean the bathroom once/week. Occasionally do the dishes.  Do laundry (one load) when you run out of underwear. Don’t notice the rug or floor.

Do laundry and dishwasher (seven loads each) every day and never finish. Spend half of your time on the floor cleaning up toddler food bits and the other half on the rug playing trucks or princesses bored out of your mind. Think this is not why I earned a graduate degree; this is why there was a feminist revolution.

Because, along with all of the above named sh*t, having a child transforms life in pretty much the most profound ways possible. Your heart grows bigger and softer. It starts to live outside your body running around with new wonder and frighteningly open vulnerability. Humanity suddenly seems so much stronger, resilient, and cruel than ever before. When you hear a child crying in the coffee shop or grocery store, it is yours. You want to help them. You want to help their parents. Tragedies that seemed distant now blow your heart open with grief and terror: school shootings, child prostitution, and 13-year-olds joining military activities. Global warming becomes your child’s future. You realize how very hard your parents worked and how mortal they are. What used to seem important is now not, and what used to seem not so important now is. Because hearing “Mommy” and answering is the most profound, humbling, and heart warming conversation EVER!

Dr. Linda is a Licensed Psychologist and a Mommy 15 years recovered from disordered eating and body image difficulties that now helps others in their recovery journey. You can see her blog at www.recoverymama.com or more about her work at www.DrLindaShanti.com.


Lil Nas X Claps Back When Parents A…

As parents, many of us are prone to moments of musical hypocrisy. For example, I found myself aghast when I … Read More

I was five the first time I watched a scary movie (I have my babysitter to thank for that.) It … Read More