My mother sent me a box of pictures from my childhood and included was the note I wrote my father the night he left. I was nine, and I can still remember him telling my mother he’d been having an affair. He packed some things as my mother cried in another room.

As he put his boots on to leave, I handed it to him.

I remember feeling pretty confident that I’d be able to change his mind, but of course it didn’t work. He read it.

He let out a forced breath, and then tossed the note onto the kitchen table. He didn’t say anything. He just finished putting on his boots, slung the duffle bag over his shoulder, and left. 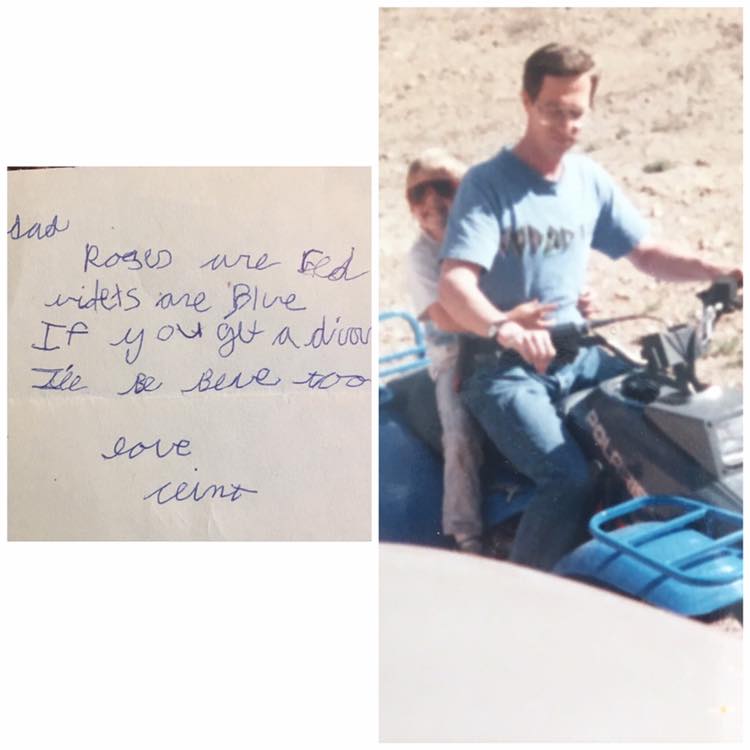 It’s funny, in that moment I felt like I’d done something wrong.

Like my note failed to keep my parents together. But when I saw it mixed in with those photos 28 years later, I felt anger, and I’ll tell you why.

After he left, he was in and out of my life until he died 10 years later from drug addiction. The most consist relationship we had was when he was in jail. I always knew where to find him then. But I don’t think I fully realized what we’d missed until I became a father myself.

That night he not only walked out on my mother, but he also walked out on years of bedtime stories, family movie nights, parent teacher conference, warm hugs, vacations, arguments over homework, Christmas mornings, camping trips, playing catch, and every other heartwarming, frustrating, and rewarding part of being a father.

I can remember him saying “you’ll understand someday.” He said that a lot. And he was right. It’s only now that I know exactly what he and I lost.

Divorce happens, but that fatherhood gig never stops. The moment I saw that note, a realization hit me in a hot angry wave. I finally understood how much I lost the night my father left, and I don’t know if I’ve ever felt more committed to my role as a father than I do right now.

Check out Clint’s amazing new book on the toddler years “Silence is a Scary Sound.”

My mother sent me a box of pictures from my childhood and included was the note I wrote my father the night he left. I…


Chilling ‘Be a Lady They Said…

The Most Hilarious Parents on Faceb…

It is nearly time to count down the last of 2017. The ball will drop, fireworks will light up the … Read More