It’s the most wonderful time of the year, and despite the craziness of the gift lists & the frenzied shopping, there’s still plenty of good, kind Christmas cheer to be found out there.

Of course, you could also choose to be one of those people that makes a conscious choice to spread that Christmas cheer around. It’s a glorious, contagious feeling- and sometimes an accidentally hilarious one, too. 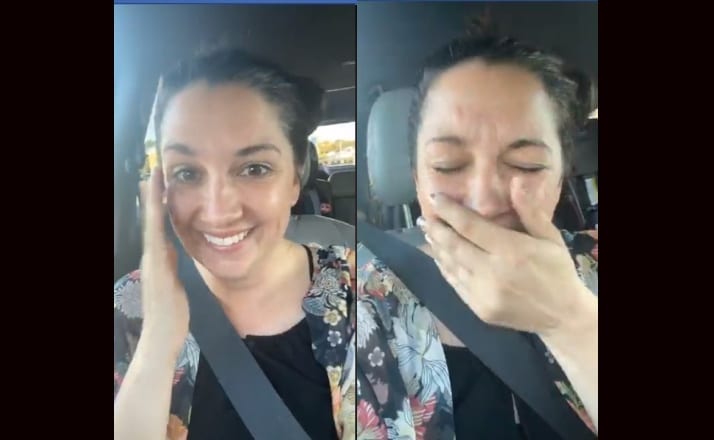 And the best part? She shared her experience, complete with gasping, tears-in-the-eyes hysterical gales of glee, on a Facebook video that has quickly gone viral.

Writer Mary Katherine Backstrom isn’t shy when it comes to sharing hilarious tales online, from that time her dog set a pizza box on fire early one morning, to  plucking chin hairs in parking lots.

But now that we think about it, maybe it’s parking lots that tend to be the locale of MK’s most hilarious… “experiences”.

Backstrom was relaxing in her car in the parking lot of her local WaWa before picking up her kids from school. As she scrolled Facebook, she found herself inspired by a post:

I had a read an article, about how everyone is so generous over the holidays, and how  it makes everything so magical…

(And yep, things are about to get magical.)

On line in the WaWa, Mary Katherine decided to pay it forward. And she did- she offered to pay for the ginger ale that the woman behind her in line was about to purchase.

The woman was charmed, Backstrom felt great, and it was a mutually precious moment.

But Mary Katherine left the store & headed out to the parking lot, and that’s where things got… weird.

So I walk outside, still in the mindset that the holidays are so magical…

Upon approaching her car, she sees a man wiping down her windshield, and again -“CONVINCED THAT THIS IS THE CHRISTMAS MAGIC”- she is beyond touched that a stranger should spontaneously perform such a random act of kindness!

Mary Katherine ran up to the man swabbing her windshield and said to him:

This is my favorite part of humanity- I love Christmas so much!

Thank you for doing this!

And proceeded to wrap her benefactor in a great big ‘ole bear hug.

If the story ended there, it would be a scene right out of a Hallmark Christmas movie, right?

But since it’s a hilarious video clip that’s going viral on social media, you know things got weird.

(It took Backstrom a minute to spit it out. At this point, the laughs were coming on so full and so hard that she could barely speak; but oh, how glad we all were when she finally did, because:

It wasn’t my car!

No. NOOOO. *cue that gif of Homer Simpson awkwardly fading into the bushes*

It turns out that it was a car that was parked directly in front of MK’s car. The man was cleaning his own windshield, oblivious to the fact that he was spreading cheer of any kind.

It’s one of those embarrassing, all-encompassing awkward moments that you can’t really come back from. You just need to embrace it, accept the mistake, and try to explain it to the stranger you’ve just hugged.

Overcome by the hysterical tears of her absolutely hilarious, epic failure, MK didn’t attempt to explain her Christmas cheer to the (obviously) confused man.

There was no anecdote for him about the inspiring Facebook post, or about paying-it-forward for the ginger ale lady.

Nope. Mary Katherine just got in her car & drove away to a different spot.

And still crying in embarrassed ecstasy, she gleefully admitted that:

I’m out here hugging a stranger at a gas station because the magic of Christmas is so powerful!

(Maybe the gas fumes as the WaWa were magical, too?) 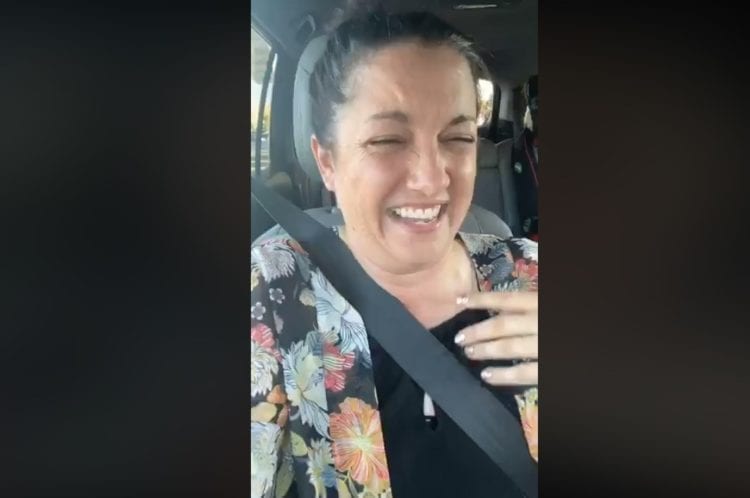 We’ve all had awkward, embarrassing moments. We’ve all experienced the times when we said the wrong thing, or tripped, or just acted so painfully awkward in front of too many people.

But Mary Katherine shared her gas-station-gaffe with such joy, such LAUGHTER, that it’s impossible not to cry in laughter right along with her as she tells her tale.

It’s no surprise that her hysterical tale has gone viral, because not only is it just genuinely damn funny, but her joy in telling it is infectious.

And THAT joy is what Christmas cheer is all about, so it seems like Mary Katherine Backstrom nailed the spirit of Christmas after all!

And if you think reading about her tale is amusing, try watching it: you’ll DIE!

Well this takes the cake as the most embarrassing thing I’ve done this year. ? ?***follow Mary Katherine Backstrom for more laughs and encouragement***