Another Superbowl has come and gone, and although the Kansas City Chiefs clinched an impressive victory, social media more is way less focused on their win and WAY more into talking about -you guessed it- the halftime show.

Shakira and Jennifer Lopez brought some serious heat in their performances last night. They were absolutely stunning- both of them literally glowed as they performed moves most of us haven’t been able to do since, no- NEVER.

It was a beautiful sight to see two strong Latina women -ages 43 and 50, respectively and mothers, no less- owning every inch of that stage.

Between those gyrating hips, popping booties, and who can forget the pole dancing?… let’s just say that things were getting pretty steamy in Miami.

But here’s the thing. Remember the awkwardness you’d feel as a kid when you watched a movie with your parents & a sex scene came on? That painful pretense of “no big deal!” as both you & your folks sat in cringe-y silence, sweating it out until the deed was done?

For many parents last night, the tables were turned. They were the ones cringing awkwardly. Their kids? Not so much….

Meredith Masony of That’s Inappropriate posted a Facebook pic of her teenage son enthusiastically “enjoying” the halftime show, & thousands of parents shared pics of their own kids’ interest in the performance. 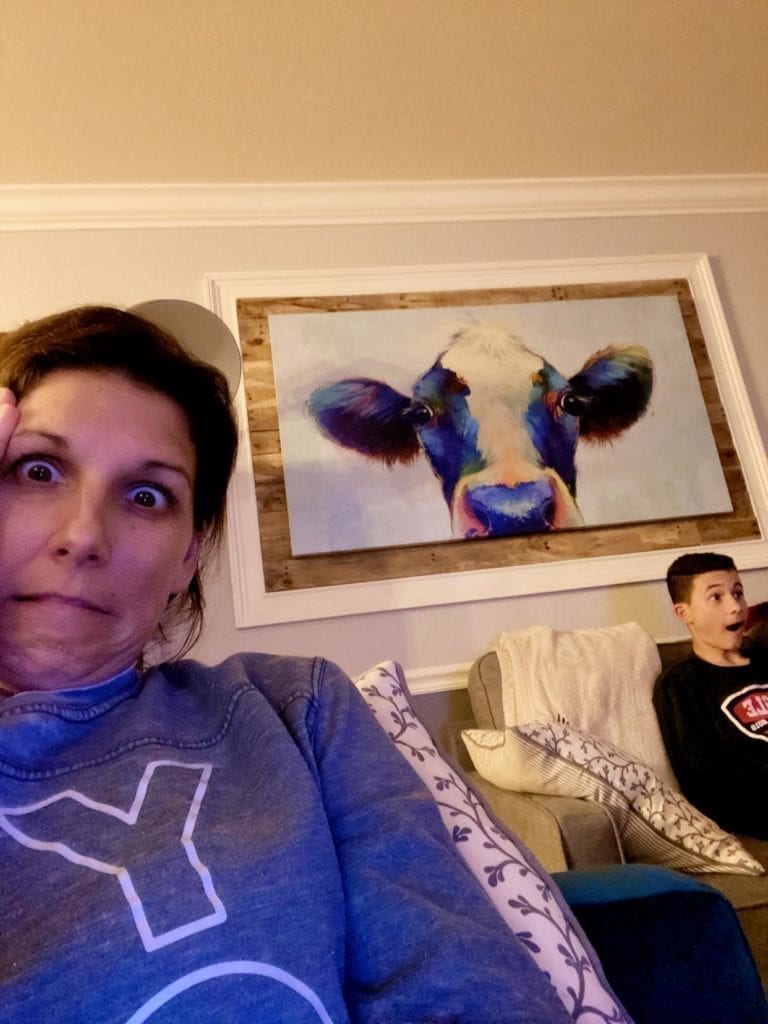 I watched the halftime show on my tiny iPhone screen, so the full spectacular was somewhat diminished. But as Meredith pointed out, bigger isn’t always better:

I wanted to hide when JLO slid across the stage and her badazzled Va-Jay was at the top of my 55 inch HDTV.

55 inches of highly-defined silver bedazzled vagina might a bit much- for some.

But for others, it was fascinating.

And Meredith was not alone in her squeamishness; her Superbowl pic earned over 64K likes within hours from fellow parents that were cringing as they watched the halftime hotties with their families.

But it was the COMMENTS that really made this parental moment comical. The post had over 9K comments in which followers shared their own kid’s (or BIG KID, aka “adult male”) reaction to JLo and Shakira’s performance.

Ready for some awkwardly amusing shares?? 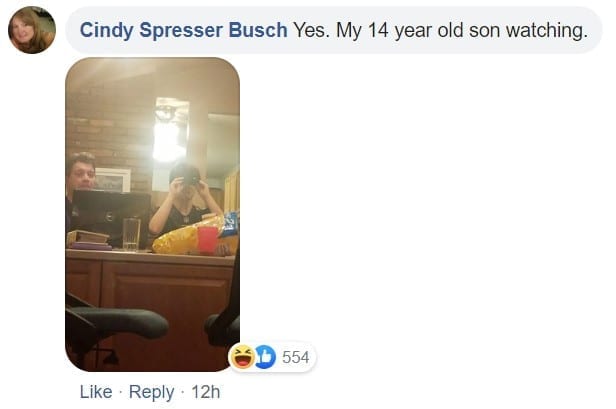 BINOCULARS. This dude came prepared! Though I’m thinking the use of binoculars is less “watching’ and more STUDYING. Just saying… 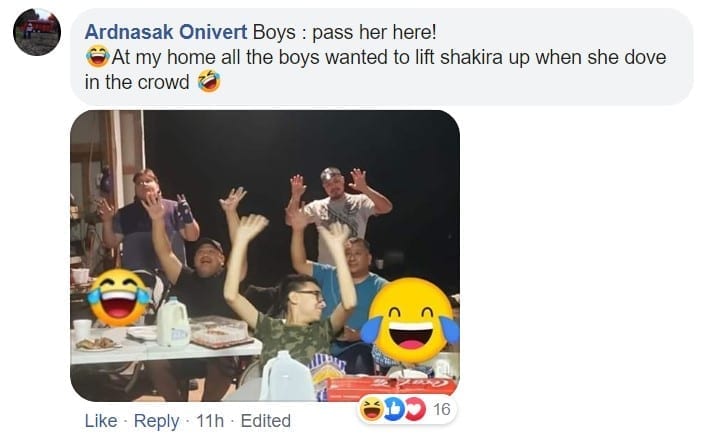 In some cases, several generations of men were rendered speechless at the sight (I’m betting this was around the time of the pole…) 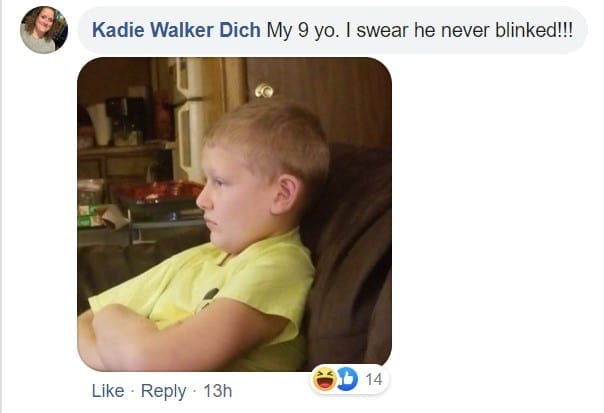 And apparently this young man wasn’t the only one…. 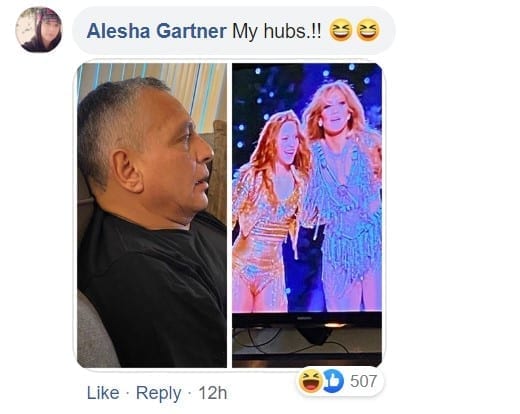 Even the young ones were… intrigued by Shakira & JLo’s moves.

That’s the only explanation that makes sense to me. And I like the idea: magnetic underwear. Flashy AND functional.

This halftime show was definitely NOT for your average Nickelodeon crowd! 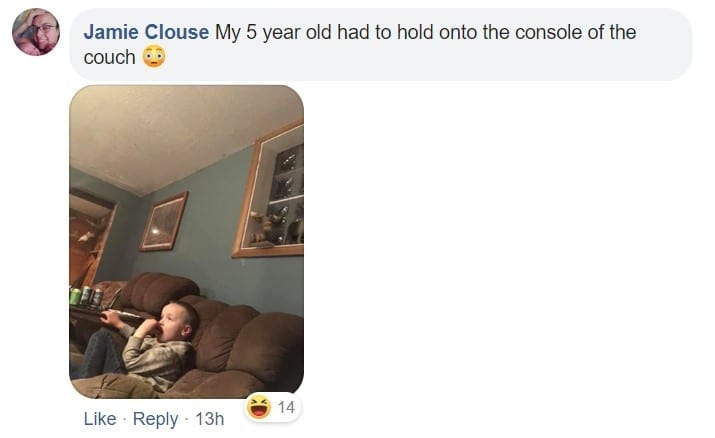 He was probably worrying about JLO falling off that pole. Me too, little man, me too. But that magnetic underwear worked wonders! 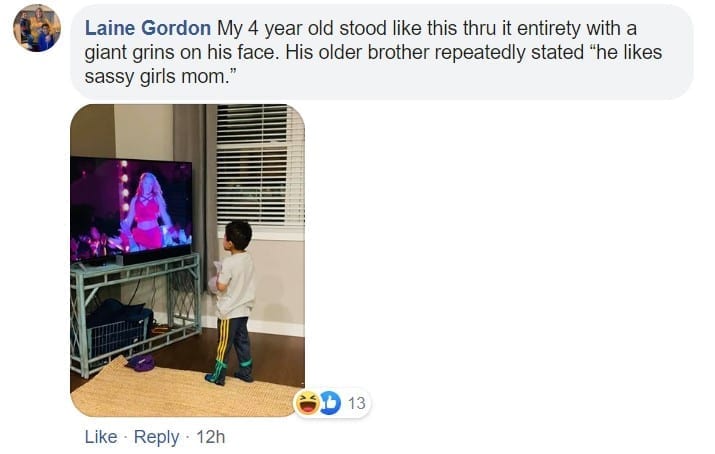 Could he get ANY closer?? LOL. “He likes sassy girls, Mom”. 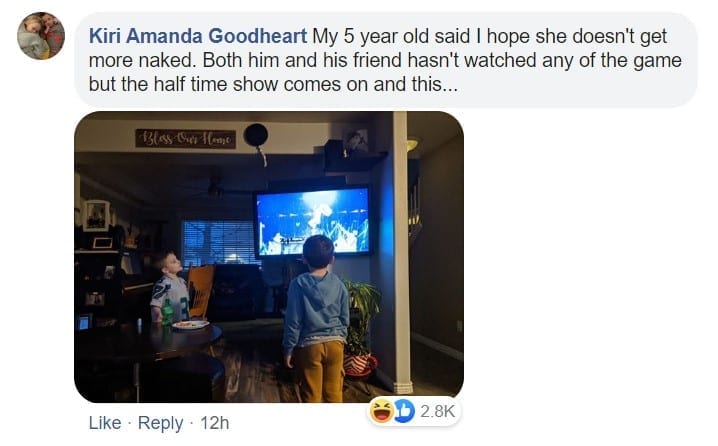 Look at how still they both stand- almost entranced. 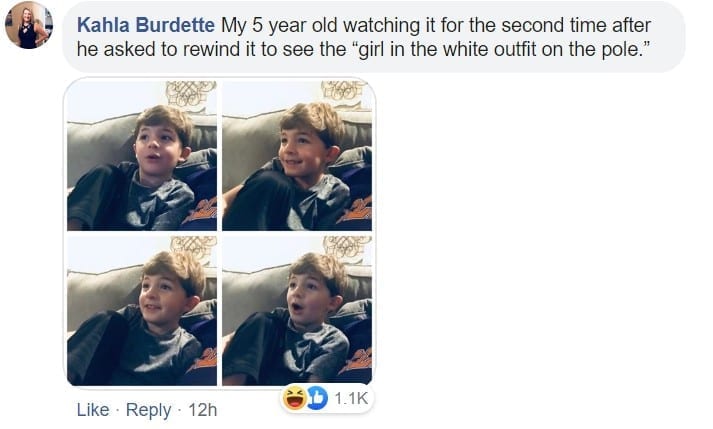 First of all, “watching it for the second time”. And note the change of expression through the shots: surprise, awe, and delight!

And the elderly apparently weren’t immune to it, either:

Shakira and Jennifer Lopez clearly demonstrated that older women can still be sexy, strong, and attractive.

No question there. It was a fiery, passionate halftime show, with music to match.

But many parents felt that it went overboard in terms of the sexiness. Both of them are gorgeous, talented women. Was the pole necessary? Was there a need for the bedazzled vajayjay?

In many households, the Superbowl tends to be a family event- kids are included in the festivities. As such, it’s assumed that the halftime show will also be family-friendly.

Remember the flak that Janet Jackson and Justin Timberlake got when Janet’s boob was somewhat exposed during their Superbowl performance back in 2004?

Shakira and JLo are goddesses among us mere mortal women, and they could have rocked that halftime show just as hard without the pole or the crotch-shots camera angles.

But regardless of whether you approve or dislike their performance, Shakira and Jennifer Lopez certainly made their 14 minutes of stage time the most talked-about part of the Superbowl!

For the past couple of days, Hurricane Isaias (ees-ah-EE-ahs, you’re welcome) has been coming for the east coast of the … Read More

Does Swimming in a Pool Really Coun…

There are two kinds of people; those who understand that swimming in the pool counts as a bath (no matter … Read More