Filter Free Parents
Home Health + Wellness Does Swimming in a Pool Really Count As A Bath? Here’s What...

There are two kinds of people; those who understand that swimming in the pool counts as a bath (no matter what the CDC says) and everyone else.

This anthropological theory was tested on Facebook recently when Facebook user, Kenneth Johnson shared a tweet from the popular dad blogger, Clint Edwards, better known as No Idea Daddy Blog, that pitted pool equals bath folks against all the germaphobes.

In addition to the viral tweet that has been making the rounds since 2019, Johnson also shared screenshots of some hilarious hot takes on whether or not swimming counts as a bath.

The tweet meme reads, “My wife and I are currently arguing if swimming counts as a bath. I’m not sure who the heck raised her, but it does. End of story.” 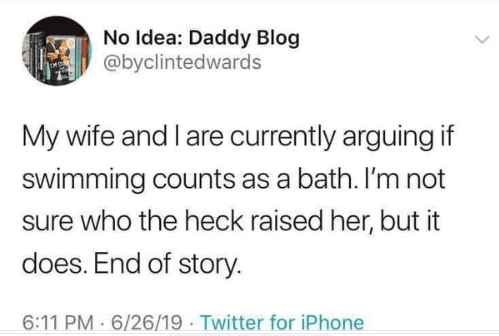 Now, as a mom of three kids, I totally accept that there are days during the sweaty hell that is summer when a swim in the pool (or lake, creek, stream, ocean, whatever) absolutely is all that will pass as a bath.

If the kids come out cleaner looking than they went in, then I’m all set.

But then last night, my middle kiddo ran up to me with a mirthful grin as he announced that his hair crunches now.

And indeed, it had some crunch to it thanks to a heavy rotation of chlorine water and (I am pained to say) a lack of showers.

Honestly, I have no idea when he showered last; it literally could have been five days ago at this point.

Thankfully, the commenters in Mr. Johnson’s hilarious round-up of opinions about swimming pools counting as a bath did not disappoint, and I found my people who stand firmly with me on this one.

“We have a pool and my kids can go days in the summer without a proper shower. They spend hours every day in the chlorine pool of out backyard. They’re not dirty. They’re fine.”

Heather Elaine agreed, writing, “We call those “summer baths” They clean. They good.”

But then the comments got downright hilarious. Jenna Holloway wrote, “Definitely a bath. If chlorine can clean a toilet it can clean a kid!”

But not everyone agreed, of course. Under Mr. Johnson’s hilarious hot takes on swimming counting as a bath, folks had some feelings.

Jessa Scott wrote, “Just went to the lake today and you better believe every one of mine and myself got in the shower and washed not only our hair but our entire body. I don’t even want to think about how awful it would feel just changing clothes and trying to be okay…Walking around like the swamp thing.”

But the best comment went to Winter Mendoza who hilariously wrote, “What in the unseasoned checked??? I know they musty asfff”

So, what does the science say about this debate?

According to the CDC, pools are actually pretty damn gross and definitely not a place to bathe. In fact, they are so gross that between 2000 and 2014, 27,000 people got sick after swimming in pools.

It helps to understand a bit about the science of chlorine.

We typically think that chlorine can kill anything and that the stronger the chemical smell in a pool, the cleaner that water is. But the reality is very different.

Chlorine has no smell when it is active.

It only begins to stink that classic pool scent when it comes in contact with germs, sunscreen, dirt, pee, fecal matter, or anything else that enters the pool.

Then, the chlorine itself breaks down and becomes a smelly contaminate instead of a friendly germ fighter.

That itchy red eye you can get after swimming in a pool? Yeah, that’s not chlorine. That’s poop.

The popular mom blogger, Meredith Ethington recently made this discovery in a hilarious post that has everyone giggling but also maybe a tad grossed out.

The post, in part, reads, “Y’all. I have an announcement. This is VERY important. Very. My kids learned from their favorite YouTuber that the chlorine smell pools have? That’s from pee. Not from a “cleanliness” of chlorine. I didn’t believe it. But a quick google search proved YouTubers are smarter than their mom and that you do NOT want to smell chlorine in a pool.”

Indeed, NPR asked the question, how much pee is in the pool, anyway? and they put scientists to the task of answering that.

Turns out, pools have a lot of pee.

A commercial pool — think public pool size — can hold around 200,000 gallons of water, which includes about 20 gallons of urine.

But while that may be surface-level gross, there is actually a pretty serious hazard that people don’t realize. Urine and chlorine shouldn’t ever mix, the result could be lethal.

“Apart from being gross, that’s also a potential health hazard. Chlorine reacts with urine to form a host of potentially toxic compounds called disinfection byproducts. These can include anything from the chloramines that give well-used pools the aforementioned odor, to cyanogen chloride, which is classified as a chemical warfare agent.”

No matter where you fall on the debate line, public pools are disgusting.

Whether you’re a nostalgic 80s-style parenting where kids roam the streets and bathe in pools and drink out of a garden hose, or you’re making your kids bathe because holy hell, pools are flipping disgusting; now you have some science to help you figure it out.

So, yeah. My kid is currently in the shower scrubbing out the “crunch” and I am never ever letting them swim without bathing immediately after again.