I remember taking my senior portrait. A lot of thought went into my wardrobe selection, because one wants to leave the perfect parting impression, no? And while I thought I looked pretty nifty at the time, I now view it with a mixture of amusement, slight alarm, and a hearty sense of “What was I THINKING??”

But some people take full advantage of this defining moment, adopting a “go big or go home” approach when shooting their senior portrait.

One young man’s “unique” wardrobe choice for his photo session has resulted in a series of some of the most memorable senior portraits ever.

Senior Evan Dennison of Portage, Indiana, was booked for a senior portrait session with Tiffany Clark, photographer & owner of Chaos & Clark Photography. Tiffany’s tagline on her Instagram business page is, “We’re capturing life one chaotic moment at a time.”, which is quite fitting considering the amount of chaotic Internet hilarity that has ensued since Evan’s photo session.

Based on the post description, Evan arrived at the session with the clothes that his mother had selected for such an important occasion. While he brought the clothes, he didn’t end up actually wearing them.

(I’m sure there was some sort of pressed shirt, perhaps a tie- after all, senior portraits are serious business, right?)

Or, for a rock star like Evan, not so much.

Tiffany recapped the hilarious tone of the session by first including the dialogue she & Evan had regarding his photos:

So we know right away that Evan is his own man. He ditched the threads his mom planned for him to wear, & he’s determined to put his own spin on this thing.

And wait -just WAIT- until you see what “his own spin on this thing” entailed.

No suit and tie for THIS cool dude! Nope, Evan was definitely sporting his own wardROBE pick.

What makes it even funnier, however, is Tiffany’s explanation:

Prompts and weirdness in the captions.

Each photo features a description of the “inspiration” that Tiffany provided Evan to direct his expressions & mannerisms.

Note the saucy dip of the hand in the robe- Evan’s got the goods, baby!

Him: Jesus is my homie.

Haha! I love his swagger!!

That’s not at all what I told you to do.

I don’t know what Tiffany did tell him to do, but I bet this shot is even cooler because Evan didn’t follow her cues!

Not at all what I told you to do, Evan.

This is hands-down my personal favorite, because it’s hilariously cheeky. Again, love the idea that Evan disregarded Tiffany’s suggested prompt & did his own thing, because the end result is priceless!

Him: THIS IS THE GREATEST MOMENT OF MY LIFE.

While some of the photos are amusing, some enthusiastic, this photo truly embodies Evan’s genuine joy in being exactly who he wanted to be in these senior portrait shots. He had a blast doing it his own way!

Evan was fortunate to have allied himself with a photographer that has an equally fun sense of humor.

Not only did Tiffany permit him to determine what kind of photos he truly wanted, but she posted it publicly (with Evan’s permission) because she knew that others would appreciate the joyful inspiration & whimsy of the pics.

Tiffany’s instincts were spot-on; her post has already earned over 213K likes & 107K shares since she shared it on Facebook three days ago.

It’s not about the clothes… but his clothing choice for this particular occasion is definitely noteworthy. And I agree, Dawn- this kid is destined for greatness! 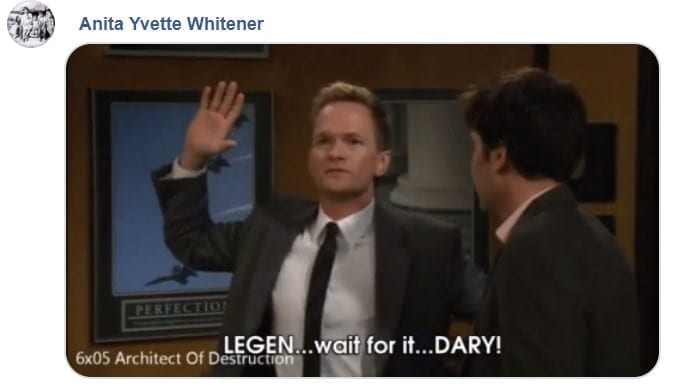 Although I’m sure Evan’s mom was initially taken aback by the unexpected result of Evan’s photo session, the pictures are perfection. They capture Evan’s sense of humor, his individuality, & his general zest for life.

In his own words to Tiffany Clark,

I’m going to be a legend.

Thanks to the Internet, Evan’s words have proven to be prophetic. He’s already a legend, & he’s still just getting started.

CAN'T BREATHE. ???My senior session tonight:ME: Why are you doing this to me? PLEASE just wear the clothes your mom…

Trick or treating is one of the biggest joys of the fall season for most kids; they will gladly go … Read More