ALL moms know that kids can fake it. Hard. Especially when they just want to sit on their tablets like zombies and talk you into drinking soda because they don’t feel good.

That’s not what I mean. Of course we can’t take off work, or rearrange our entire lives every time a kid is sick. If you can do that, then you must be a unicorn mom. But, what we can do is respect other families by not sending our kids to school when they are REALLY sick. 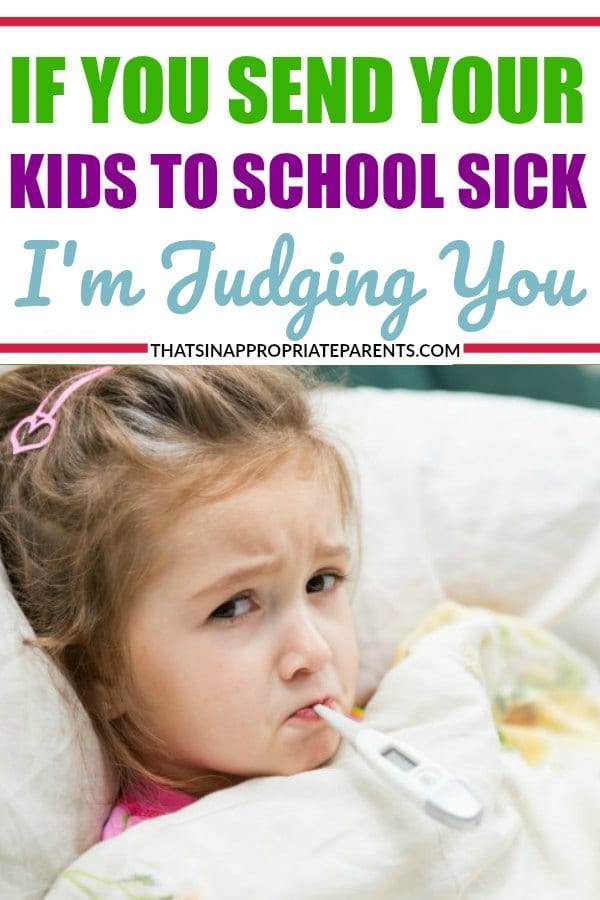 So, here are some fast and furious “Mom Rules” I think we should all abide by not just because they are common sense, but because we also don’t want to be jerks when our kids are sick.

Because, in my opinion, you’re a jerk if you send your kid to school sick, and my kid gets sick.

Which probably means everyone in my entire household is getting sick, too.

If your kid was running a fever within the past 24 hours, don’t send them to school

Even if they are fever-ing while playing fortnite and eating cheese puffs and asking for playdates. Just don’t do it. A fever (in case you don’t know) is actually 100.4. My husband (who works in the medical field reminds me of this often).

However, if my kid is “off” and not wanting to eat or play with friends, and that fever is 99.9, I’m going to keep him home probably anyway. Ya know. To not be a jerk.

If your kid is vomiting or has the poops

For the love, please don’t send your kid to school if he threw up last night and casually mention it to me at school drop off like it’s no big deal. Because, believe me – I will be imagining your child licking my child’s pencils in class today and I will for sure worry about it for at least a week.

If he threw up and you think it was because he just drank too much Gatorade, great. Keep him home anyway. Kids are tricky little creatures, and mine have been known to puke a day, and then take a day off and puke again on the third day.

Wait at LEAST (and I can’t stress at least) 24 hours since the last time they puked before sending them back. And, if he has the poops, I’m sorry, but no one wants to use the same toilet as him at school. Have you seen little kids’ wiping abilities? They’re probably about as good as a monkey wiping his butt.

We have a case of Norovirus that has broken out in a school district in my state. 600 kids called out in ONE DAY from one school district. Stomach bugs spread like wildfire, and no one wants to have the puke bug in their house. I repeat – NO ONE.

Please don’t call twelve hours good, or start them on antibiotics and send them on their way that same morning. Ask your doctor, he’ll for sure tell you the same thing. Those rules are there for a reason. To protect the rest of us. So, don’t be a jerk and send your kids to school until that medicine has had some time to do some work. 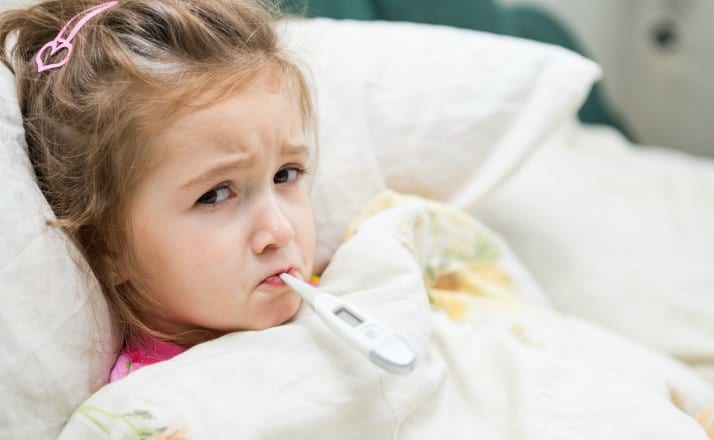 If your kid has something CRAZY contagious

Hand, foot, and mouth is so contagious a toddler that has it can look in your direction and your kid will probably get it. OK – not really, but don’t send your kid to school sick with one of those things that spreads like wildfire. Yes, all kids have to go through these types of illnesses at some point, but we don’t want to if we can help it.

Especially the flu. Not the stomach flu, but Influenza. It’s not just a serious illness, it can literally kill children. So, keep your germs away from the rest of us.

Maybe you think the illness is no big deal

Maybe you are one of those super laid back parents that kind of shrug their shoulders when a child projectile vomits on you. Good for you. Really. But, that doesn’t mean the rest of us are so chill.

Even simple childhood illnesses like Strep can cause complications in some kids. Some children are immunocompromised. So something like Norovirus can put them in the hospital for dehydration. And, we all know that the influenza is deadly. And, not just to babies. Children die every year from the flu.

And, before you argue that you work, and can’t just stay home with your sick kids, don’t be so selfish. We don’t expect you to take a day off for the sniffles. But, figure out a way to make it happen when they are legitimately ill.

Not just for the sake of everyone else, but for your own kid too that probably needs a freaking rest.

I’m pretty laid back about the way other people parent. I try to always give the benefit of the doubt when people make different choices than I do, but sending your kids to school when they have one of the issues I mentioned above going on is just a jerk move.

And, yes, if you casually mention your kid puked all over his bed last night, and he’s right there in line waiting to head into the classroom with my kid?

See what our own Meredith Masony has to say about sending your kids to school sick:

I'm sure I am going to ruffle some feathers, but I don't care. Please keep your sick kids at home. Can I get an AMEN???


An *NSYNC Movie Is In The Works And…

That’s right all you *NSYNC fans. Arguably the greatest boy band ever is coming to the big screen (and by … Read More