Technology is awesome, isn’t it?? We’re all used to having phones now; it’s hard to even remember a time when we didn’t have access to the entire world right in the palms of our hands.

I’m the first to admit that I often fall down the rabbit hole of social media. I grab my phone to “quickly” check something & the next thing I know, I’m browsing every app, spending way more time than I expected glued to my iPhone.

But too much of a good thing can be bad for you, and phones are no exception. Especially when it comes to kids.

Kids are becoming addicted to their smartphones- literally.

And it’s gotten to the point that some concerned parents around the world are seeking professional help to assist their teens in doing so.

South Korean youth are apparently so addicted to their smartphones that the country now offers treatment programs to “detox” them from their addiction.

According to government statistics, 98% of South Korean teens owned a smartphone in 2018. While the number itself is staggering, many teens are also displaying signs of phone addiction. 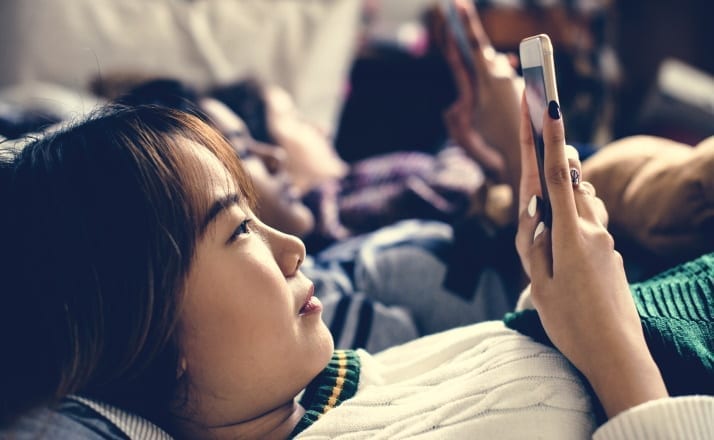 Some symptoms of phone addiction include:

Some of these symptoms might be hitting closer to home than you thought, right?

Based on research conducted by the Ministry of Science and Information and Communications Technology, nearly 30% of South Korean children ages 10-19 were determined to be “overdependent” on their smartphones.

When interviewed by CNN, 16-year-old Yoo Chae-rin admitted that she did not feel capable of limiting the amount of time she spent on her phone:

Even when I knew in my head I should stop using my smartphone, I just kept going.

I couldn’t stop, so I’d be on it until dawn.

For kids, too much time in their phone’s virtual world means significantly less time in their “real” world, interacting with their families & friends in person.

South Korea officially launched a program to combat phone addiction in their youth by creating a foundation to deal with it known as the National Center for Youth Internet Addiction Treatment.

South Korea’s detox camps are designed to assist kids in weaning themselves off their phones and re-learning how to engage in their everyday life.

At the camps, kids participate in arts & crafts, sports, and various activities. They also receive a variety of counseling: individual, peer-to-peer, and family sessions.

One of the most challenging aspects of the program: the 30 minute of meditation that is required every single night.

And why is it so challenging?

Because kids that are so connected to their phones can find it nearly impossible to quiet their minds long enough to sit for 30 minutes, “doing nothing” as they perceive it.

The response of the children that begin detox even resembles what you’d expect to see in a traditional rehab environment: as camp director Yoo Soon-duk explained to CNN:

for the first few days the teenagers have an “agonized look” on their faces.

“From the third day, you can see how they change.”

It takes roughly three days for teens to adapt to not being on their phones constantly. Like substance abusers, the teens need to “detox” from their addiction.

And once the detox takes hold, the teens then spend time getting reacquainted with how to socialize in person rather than through a phone screen.

And does the treatment work? Although it’s still a relatively new concept, recent camp graduates seem to spend considerably less time on their smartphones, averaging “only” 2-3 hours per day rather than the 6+ hours they were using prior.

The bottom line: kids who were invested in wanting to change their phone habits benefited from the treatment. Those that were forced by parents to go gradually slunk back into prior phone-addiction behaviors.

While South Korea’s approach to teens & phone use may seem like overkill to some, the reality is that too many kids ARE addicted to their phones, all across the world.

As parents, we can try to set time limits. We can confiscate phones. We can refuse to give our kids phones in the first place.

There are options to avoid teens becoming addicted to their phones, but the fact that a civilized country felt the need to implement detox centers for phone addiction in the first place should be a wake-up to parents to assess their own kids for the same possible issue.

The Most Hilarious Parents on Faceb…

It is nearly time to count down the last of 2017. The ball will drop, fireworks will light up the … Read More