When every other parent is dodging the sleepover bullet I’m out there on the front lines. You can call me crazy, unbalanced, stupid, whatever. I don’t care. I love the sleepovers. While you tell little Johnny that he can’t have his friends over because his turtle has a social anxiety disorder, I’m inviting my son’s entire baseball team and all his friends in the neighborhood, too.

At his last birthday sleepover we had eighteen kids. That’s eighteen 8,9,10, and 11 year old boys. Not everyone we invited could come. We were sad, but what are you gonna do?

This is what typically happens at one of these epic ragers. Drop off starts around 3pm. There are a series of looks and comments from the parents of each kid as they come in the door.

Parents of Kid 1: “How many are coming? Wow.” This is accompanied by laughter and the follow up, “You guys have fun,” with a knowing smirk.

Parents of Kids 5-9: “You’re sure?” along with the inevitable offer to my husband to hide him in the trunk of their car and sneak him off the property. How do they know this wasn’t his idea? (This was so not his idea.) As the kids are amping up around us, he makes eyes like really he wants to go.

Parents of Kids 10-15: These adults are now saying, openly, that I am certifiably deranged and seemed concerned about the situation. Some make noises about drug testing.

Parents of Kids 16, 17, and 18: Silently hand me slips of paper with a phone number in case of emergency and a bottle of tequila before they sprint back to their car and speed away lest I change my mind.

There is a method to my madness. Sleepovers are the best way to get to know your child’s friends. When you spend that much time with that many kids in close quarters, their personalities come out. You find out which ones are good and which ones you want a restraining order against.

Most kids are awesome. I’ve met very few that I don’t want my kids to spend time with and not one that wasn’t lovable in some way or other.  The trick to embracing the sleepover is to very quickly identify the most lovable trait in every kid and focus on it.

I like to have the big sleepover in the summer. Backyard campouts are the best. The kids pitch tents in our fenced backyard and can come inside if they get scared or need the bathroom. I sleep in the living room next to the window overlooking the backyard and my husband, God bless his “tried to escape in Elijah’s dad’s trunk” soul, camps out with the boys.

Before they bunk down, though, we run them ragged. Whiffle ball tournament in the front yard with peg out rules, slip and slide races with possible concussion checks – haven’t had one, yet, knock on wood, and food. All the food.

Never. Ever. Ever have a movie.

When you put in a movie you are just asking for arguments and boredom. Half the kids won’t want a movie at all. The ones who do will argue about which movie, and half of those will talk too loud through the whole thing till they are all just bouncing off the walls destroying the house. Nobody needs this.

Keep them busy, keep them fed.

Be ready for The One Who Wants to go Home.

He’s going to be sad and it is your job to help him make a clean exit while still looking “cool” in front of his friends. “Sorry, guys. Joe has to go. Special assignment with the FBI. Can’t be helped.”

Be ready for The One Who Gets Hurt.

There’s a bleeder at every sleepover. It isn’t his fault. It is almost always dumb luck. You will spend at least an hour with this child and use up all of your first aid supplies so stock up beforehand. You will call his mother at least twice before morning.

Finally, be ready for your own kid who decides halfway through that there are too many kids over and maybe this wasn’t such a good idea after all. He thinks maybe one of these a year is enough.

See what just happened there?

In the end, every kid has fun.

Even the bleeder. They all eat a sleepy breakfast and say, “Thank you!” as they stagger out the door at pick up time. Parents are amazed that everyone is still alive and they’ve maybe had a chance at a night off, too. The best part is my son’s happy smile when he says, “Thanks, Mom. That was the best.”

It’s all worth it. Embrace the sleepover.

And definitely drink the tequila.

(Oh, and yes, I am mostly a boy mom. I did have one girl who is all grown up now. She had sleepovers, too. Don’t do it. Girls are mean.) 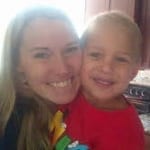 Lauri Walker is wife to Brandon and Mama to four kids who’ve managed genius status despite being raised on chicken nuggets and take out. Her profession is Daycare Diva and she is a confessed over volunteer-er. In her spare time, Lauri tries to write a little. She has appeared on BLUNTmom, Mom Babble, Mamalode, Good Mother Project, and Sassy Lassie and has her own blog at Mama Needs a Nap. You can find her on Facebook, on Twitter, and she’s still trying to figure out Instagram.