The birth of a child is in and of itself a miracle. However, for one baby boy, his birth wasn’t the only miracle to happen that day.

Grab the tissues, you’re going to need them.

In a Facebook post that has gone viral, Haley Parke shares the heartbreakingly poignant story of her son’s birth – and her husband’s death – a powerful reminder that when one life ends, another begins.

“I come to you all with news that is the most joyous, but also the most somber.

On December 2nd, my husband Jb and I welcomed our second son, earth side. This boy entered the world in the most brave and magical way, with a very big miracle to fulfill in a short matter of time.”

Just days before, Haley’s husband JB was admitted to Hartford hospital with complications from his cancer. Pregnant with their second child, and 3 weeks away from their due date, the couple hoped that JB would survive long enough to meet him.

They thought they had 6 months. It turns out they only had a matter of days.

After discussing it with the ICU doctors and the head of high-risk labor and delivery, they decided to induce.

“I kissed my sweet husband goodbye and told him to be strong and hold on for me and the baby – he said he would.”

The doctors began inducing Haley on Wednesday night. The plan was to have a quick labor and vaginal birth. But as with any birth, things didn’t go according to plan.

Thursday morning at 8 AM Haley received a visit from the ICU doctors. The news was grim. Jb was “declining fast and had a matter of a few hours.”

Without hesitation, Haley immediately agreed to a c-section. One minute later she found herself in the OR, and a mere 20 minutes later, her son entered the world.

The medical team knew they had to act quickly. Time for Jb was running out. The doctors and nurses ran the baby up 2 floors to the ICU and placed him on his daddy’s chest.

Haley goes on to write:

“The miracle of all this? When our baby was placed on Jb’s chest, Jb’s vitals all instantly improved.

He was also acknowledging our son was there by making small head movements and sweet moans.”

After being stitched up, Haley joined her husband and newborn.

She spent her recovery time watching her husband take his last breaths with his son, who was just taking his first.

“I was gazing at him in sadness, but in awe of his strength. He took his last breaths with our son on his chest and my hand in his hand.”

Haley goes on to explain that even though their son was 3 weeks early and potentially at risk for complications that can come with premature birth, he was born a healthy 7 lbs 4 oz.

Just as she believed he would. 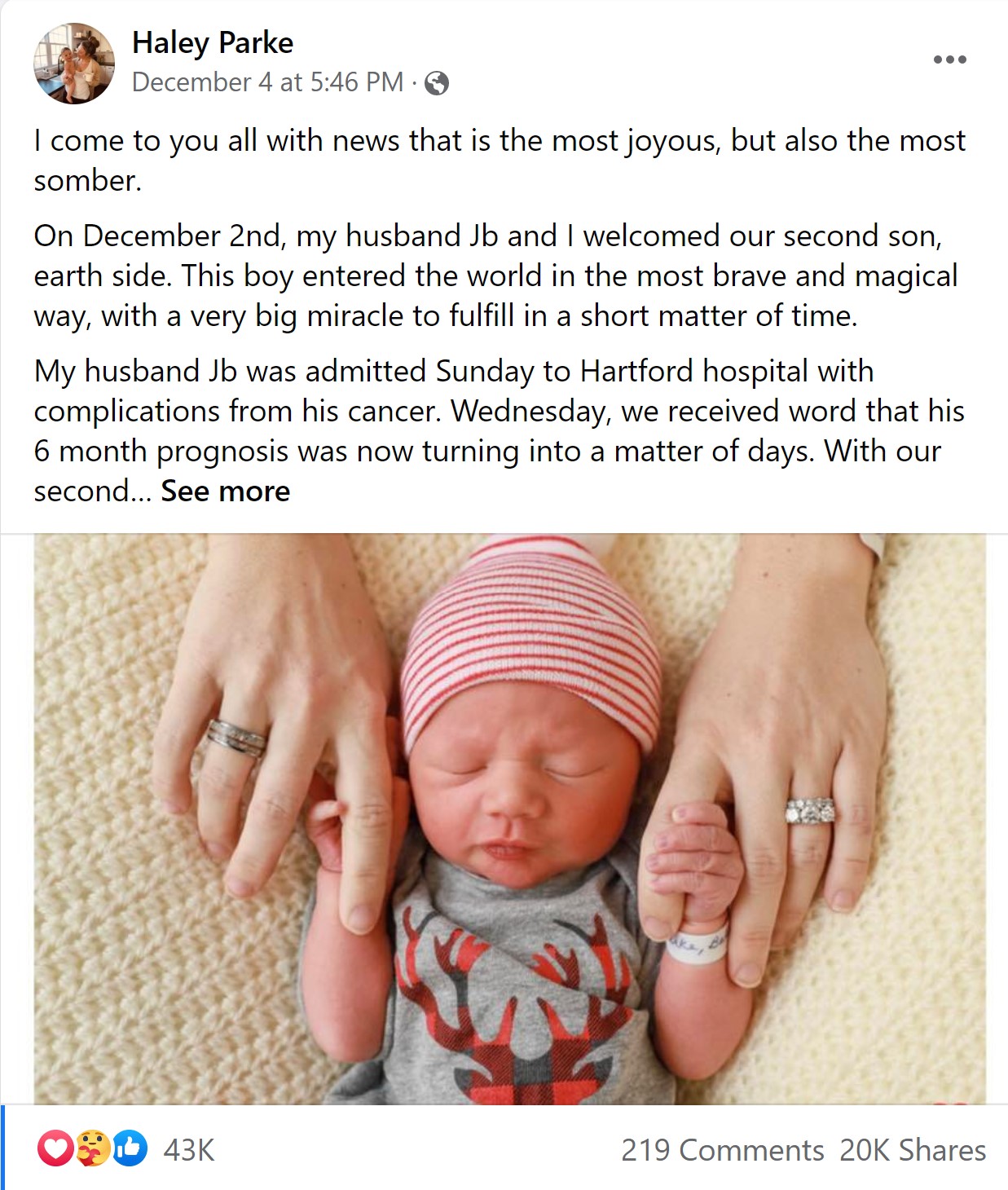 The doctors and nurses who were there that day commended Haley on her actions. Many of them called what she did “brave” and “heroic.” However, Haley doesn’t believe she’s a hero. Instead, she credits her actions to the most powerful force on earth: love.

“Some of them told me they’ll never forget this act of selflessness. Some called my actions brave and heroic. I just call it love. I acted out of love.

I put my trust in God that this was part of his plan, and I did what I had to do, out of love, to fulfill my husband’s last wish.”

And that’s exactly what she did. However, her story doesn’t end there. Not only did she fulfill her husband’s last wish, but she also ensured that his legacy would live on, in the birth of their son, AND in his name.

Haley named her son after his father.

“Up until the moment of induction, we had not had names picked out. I knew in my heart it was only right to honor my husband.

So, it is my pleasure to announce the birth of our brave, amazing son, John Beeson Parke (Jb).

Welcome to the world baby Jb. Your story is truly a miracle.”

This is both heartbreaking and beautiful. It is the epitome of bittersweet. And it is an incredible testament to love. The love of a wife for her husband, and the love of a father for his son.

A love that will truly last a lifetime.


This Giant Beach Ball Has The Most …