Filter Free Parents
Home Health + Wellness Mental Health Is It Normal To Feel Like You’re Constantly Drowning? Because That’s How...

Parenting in a pandemic is by far the hardest thing I’ve ever done. I would rather have another C-section than do this. I feel like it has broken me down to my core and I’m just walking around trying to do life the best way I know how.

And that way has not been stellar.

So once again, I have decided to list what I feel my failures during the last nine months have been.

Just to make you feel better about your parenting because I can’t be the only one!

My children have zero screen time limit anymore. They could sleep with a tablet in their bed and I wouldn’t give a flying fuck as long as they were quiet.

My six-year old has been playing Fortnite. I heard a slight gasp from moms that might monitor screen time.

My three-year old still isn’t completely potty trained. I had nine months to do this.

But I didn’t. I waited until I could no longer wait. Because potty training is gross and boys pee everywhere and that pee smells.

I have lowered my standards of clean. I thought that you were supposed to clean more during a pandemic, but not me. I just watched more Netflix.

Henry has been late or missed his kindergarten Google Meets because of my work schedule. I never thought I would say my six-year old has video conferences.

I had a mental breakdown because I had to work full-time from my office but my son had to be in kindergarten full-time at our house and I couldn’t be two places at once. 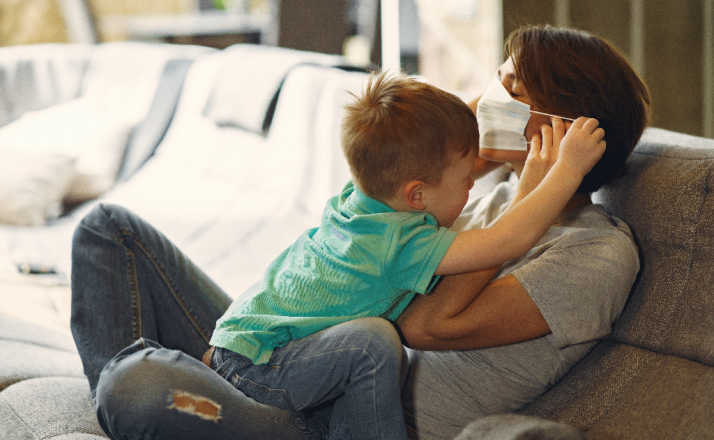 We ended up having to hire a babysitter. I am lucky that we have the resources available to do that. I don’t know how most people out there are doing it.

I have given up on entertaining my kids. I don’t even try. I just don’t have the energy. I am absolutely exhausted in every form of the word.

I have yelled. A lot. About everything.

I think that 98% of the words coming out of my mouth are no or shit. I have lost my temper. I have cried. I have had to apologize. A lot.

I have let the boys wrestle like they are in a cage fight right in front of me and I haven’t done a thing. My selective hearing has really improved. So that’s a plus!

I don’t care what they eat. My three-year old pees every 12 seconds so he can have candy and I keep handing it over.

This list could go on and on and on. But I’m going to stop there.

Yes, I have hardcore failed at a lot over the last nine months. But we are all still here and kickin’ so I’m counting that as a win.

Just remember, not a darn thing about what we are doing right now is normal.

Virtual school is not normal.

So parenting can’t be normal.

I don’t know if it’s normal to feel like you are constantly drowning, but that’s how I feel right now. Like I’m in the middle of a body of water and I can’t swim anymore.

And that’s why we have mom guilt. Shouldn’t we give ourselves grace? I know I should, but it feels like I’m past that point. Do I need a divine intervention? Most likely, yes. But keep your head up. This is hard, but not impossible. We will persevere. We always do.

Mom Guilt: Parenting in a Pandemic

According To New Study, AAP No…

Parenting is hard, period. No matter how much you’re hustling, there’s a constant feeling that things are somehow falling through … Read More

Teaching our kids about consent is one of the most valuable life lessons we can give them. It empowers them … Read More