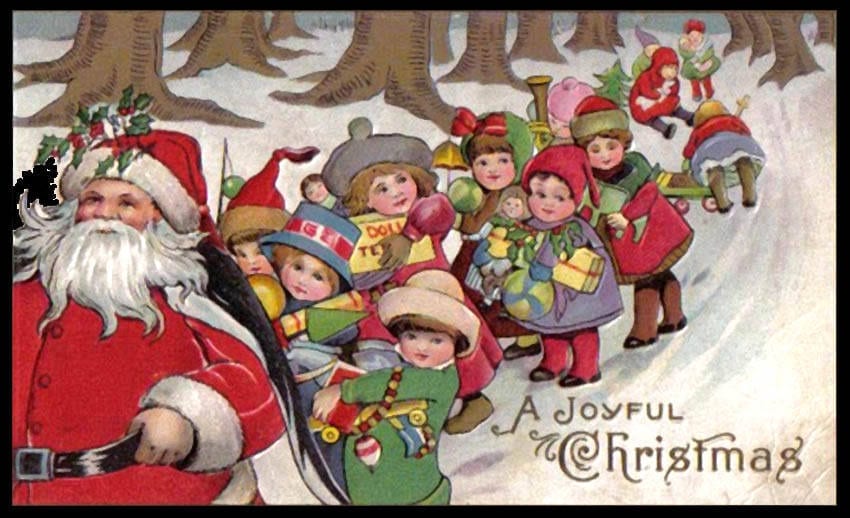 A very dear friend and equally wonderful mother of two, Joyce Galloway Parker, has stopped by MommiFried today to share a Christmas memory with us. The post below is in her own words, beautifully written, reflecting upon that dreaded question that every child eventually asks, “Is there really a Santa Claus?”

With the holidays upon us, and the new year just around the corner, these last few days I’ve been reflecting back on years past. I always tend to get this way this time of year, partly because of the approaching new year, but mainly because both of my children were born in the fall (they were born 10 months and 3 weeks apart), so they have both just turned another year older. How is it that my babies became adults so quickly?

I’m sure we all have memories, moments and events in our lives that will be in our hearts forever, some funny, some serious, and everything in between, and this is one of my favorites.

It seems as if just yesterday Clint and Vicki were small children, happily awaiting the arrival of Christmas morning, anxious to see what Santa Claus brought them. Every year when they were young, my husband would play up the Santa part to the fullest. He would tell them the most wonderful stories about Santa Claus, which added to their excitement and anticipation of Christmas morning.

For weeks before Christmas, it was Santa this and Santa that; he loved seeing how excited they would get at the mention of Santa’s name. I don’t think a day would go by in the whole month of December that he didn’t mention Santa Claus to them; I mean he REALLY played up the Santa part. I think he got as much pleasure from telling them all about Santa as they got from hearing all about this wonderful, jolly old man in the red suit, who traveled across the world in a sleigh full of toys every Christmas Eve.

We knew that the joy and excitement they (and we) got from looking forward to seeing what that jolly old man would bring them would have to come to an end one day, but we did our best to prolong their belief in Santa as long as possible. But then, the dreaded day came when Santa ceased to be that magical being, that wonderful part of Christmas that children all over the world love so much.

On this particular Christmas day, it was late in the evening, and it had been a long and hectic day for me. I had just settled in with a good book, hoping to finally relax after all the work and festivities of the day, when my son, who was about seven years old, entered the room.

He walked up to me slowly, in measured steps, as though he had something on his mind, but not sure if, or how to say it. I watched him as he approached me, seeing the concerned look on his face, and wondered what was troubling him. As he walked up and stood next to me, I asked him if anything was wrong. He stood there for a moment, not saying anything, but I could tell he had something on his mind.

He finally spoke and, when he did, I froze; the dreaded day had come. He looked me in the eye, and very softly asked, “Mama, is there really a Santa Claus?” Gulp. Panic. No, it’s too soon, he’s still a baby! What do I say? All of these thoughts ran through my mind at lightening speed, but deep down I knew I could not lie to a direct question. I felt if he was old enough to ask it in such a serious manner, then I owed it to him to tell the truth. But just to be sure he really wanted the truth (and hoping he didn’t), I asked him if he really wanted to know. To which he answered “yes”. So I did what I felt I had to do; I said, “No, Honey, there is no Santa Claus.”

He stood there for a moment, with a contemplative expression on his face, not saying a word. I thought he was just trying to digest this new information, and I began wondering if I should have given him a different answer, thinking I had just broken his heart. Finally, after what seemed an eternity, he looked at me and in a most concerned manner asked, “Well, Mama, does Daddy know?”

It was all I could do to keep a straight face while I assured him I would “break the news” as gently as I could to his dad, that there was no Santa Claus.


This Buddy the Elf Wreath Is The Ch…

Whether you’re a sports fan or not, you likely heard via social media about the USA Women’s Soccer Team competing … Read More