But then, every once in a while, I get a shocking reality check that I am, in fact, no longer 25. I am old.

And if your teenage idol used to grace the covers of BOP & Tiger Beat I hate to break it to you, you’re old too.

Since those of us who grew up loving boy bands like Backstreet Boys & *NSYNC are of a certain age *ahem* it only stands to reason that the members of these bands have also aged.

And nowhere is this more obvious than at a recent concert in Washington, D.C. when Justin Timberlake took the stage.

41-year-old JT nearly broke the internet after footage of his performance went viral, and not because he was “bringing sexy back.”

Nope, rather it was the serious dad vibes he was giving off that really caught everyone’s attention.

Timberlake was participating in Pharrell Williams’s Something in the Water Music Festival when he decided to show off some of his dance moves. (We’re guessing he regrets that decision now.)

The performance is currently making its rounds on social media and has been viewed millions of times in just a few days.

The artist Samuel Lavon shared a clip on his Facebook page where it’s garnered 14K likes, 37K shares, and over 8K comments.

And it’s the comments, ya’ll, that’ll have you cry-laughing. 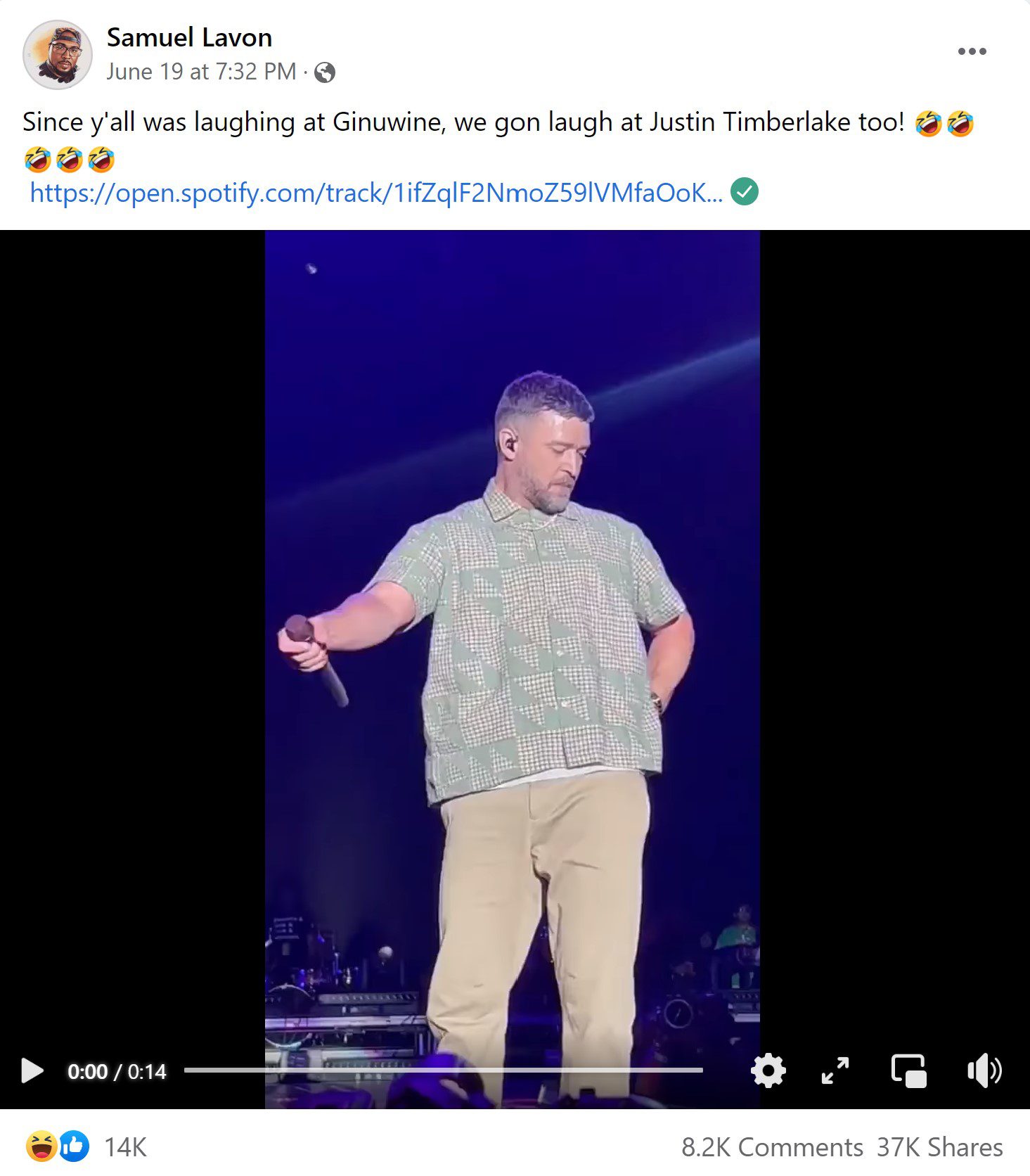 Upon watching the video, people came out in droves to beg the question, “What the hell happened JT?”

Maybe it was the shoes:

Maybe it was the khakis (I mean, they definitely didn’t help):

Maybe it was the whole “Imma just popping in here on my way to the neighborhood BBQ.”

Maybe it was his dance moves that looked more like he was doing the “hokey pokey” than “Beat yo’ feet.”

…trust me when I say, knees don’t bend like they used to, IYKYK.

Some people blamed it on fatherhood. They’re not wrong.

Being a parent is EXHAUSTING. I think I’ve aged about 75 years since becoming a mom 14 years ago.

Or maybe it was literally, allll of it. (It was definitely all of it.)

After all, not everyone is lucky enough to be immortal like say, Paul Rudd. And can we just pause for a minute to talk about this? Because this man NEVER ages. What’s his secret?

Alas, we are not Paul Rudd, we are but mere mortals. Including JT, it would seem. Just call him PawPaw now.

Of course, one diehard fan came up with an explanation for why Justin looked the way he did. And age has nothing to do with it. Because clearly, CJ just can’t face the truth; we are all old now.

Justin jokingly addressed his performance on his Instagram stories, even going so far as to apologize to fans.

Zooming in on his sneakers he said:

“D.C., I just want to apologize to you for two reasons: here and here.”

He went on to say:

“I had a long talk with both of them, individually, and said, ‘Don’t you ever do that to me again.”

He even brought up the khakis.

“Maybe it was the khakis, it was a little khaki vibe.”

“I’m gonna make this up to you. I’m gonna focus on these two guys right here and get them right. “Love y’all.”

Look, as hard as it may be to face, none of us are getting any younger, including the idols of our youth. Time passes. There is no stopping it or slowing it down.

And while this can be a hard pill to swallow, there’s always the bright side, at least we’re all still ticking right along with it.