Filter Free Parents
Home Kids Mom Calls Out Chuck E Cheese for Ignoring Her Black Child During...
A mom on Twitter has gone viral after posting a heartbreaking video of what appears to be a Chuck E Cheese mascot ignoring her Black two-year-old daughter at a birthday party for white children.

The tweet has been shared more than 36K times and has over 4K comments, where controversy and debate have been stirring since the video was posted.

“On July 30 at Chuck E Cheese in Wayne, NJ, my 2yo was racially discriminated against,” Tweeted Umm Safa.

“As you can see, he gives all of the yt kids hi-5s & PURPOSELY ignored my black baby. When confronted, he ignored me as well. The manager, Angie Valasquez, made excuses for him…”

PLEASE RETWEET?? On July 30 at Chuck E Cheese in Wayne, NJ, my 2yo was racially discriminated against. As you can see, he gives all of the yt kids hi-5s & PURPOSELY ignored my black baby. When confronted, he ignored me as well. The manager, Angie Valasquez, made excuses for him.. pic.twitter.com/QMmE3wmti1

The Chuck E Cheese franchise is no stranger to scandalous news, and they seem to find themselves in the center of public ire rather frequently.

One has to wonder if it’s at all surprising, then, to read such sad news that a little girl was racially discriminated against at the same franchise that once inspired Vice to ask why so many people get into fist fights at their establishments.

In the Twitter video, we can see Safa’s adorable little girl in light-up shoes, a sweet ballerina-style dress, and a huge, excited smile as she jumps up and down when the Chuck E Cheese mascot walks over in her direction.

To the left of the screen appears to be a stage where a group of children is standing and receiving high-fives from the famous mouse.

But sadly, even though this little girl is literally jumping up and down in front of the mouse and holding up her hand for her high-five, the person under the mask appears to ignore her and turn their back to her. 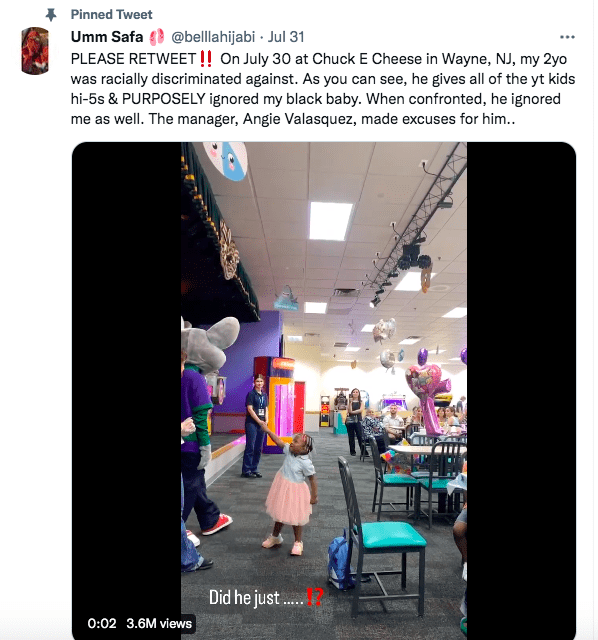 So, what happened next? Safa left a tweet update in the comments that read,

“Saying she’s ‘sorry I feel that way’ but he didn’t see her, even after showing her the PROOF in the video. Please make this go viral like y’all did with that ‘co-wife’ tweet! This is getting out of hand!!!” 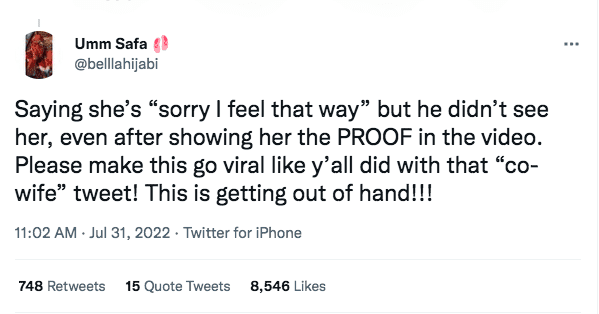 As you can imagine, the comments section immediately blew up.

Many people came to the mom’s defense, pointing out that this was a white children’s birthday party, which affected the general atmosphere of the situation.

But of course, this being Twitter, there was a plot twist when former Chuck E Cheese mascot employees entered the convo.

Twitter user AMD716 wrote, “As a tenured Check E Cheese, I can say in all seriousness, there are many blind spots with this head. I have missed seeing children, I have stepped on kids, I have fallen into the pizza buffet, and even fell into the ball pit. I’m hopeful this is the case here as well.”

But that didn’t go over well with others.

“You maybe can’t see from [close range], but she’s already there before he comes close. I’m not sure what he raised his hands and then suddenly turned around. I thought he was gonna give her a high-five [in] that moment.” 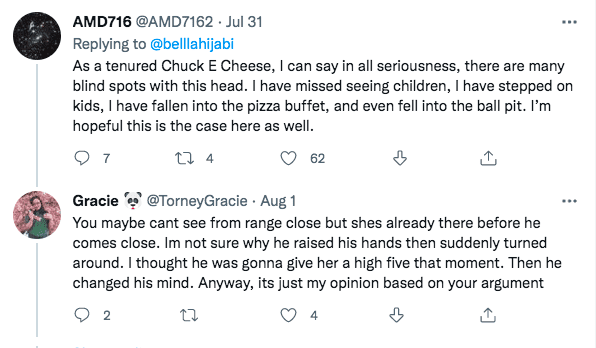 Miaya wrote, “I worked for Chuck E Cheese years ago, wearing that same mask. You can see a lot, the mask doesn’t hinder your vision, and if you’re by kids, you should always watch by your legs. This was intentional!”

Crack Rabbit shot back with, “Worked at my location for 3 years. Barely could see shit out of that thing.”

Others defended the mom and the little girl fiercely but were quickly rebuffed by a keyboard warrior who seemed to relish responding to quite a few folks.

Arminuar BKA ‘MeMe’ wrote, “He saw her! He looked down at her and still chose to ignore her.”

But Delores Chnei, PhD took issue with this assessment and replied,

“The ‘helpers’ were birthday party hosts. Their job was to get the birthday kids on the stage and get them their (paid for) birthday acknowledgment.” 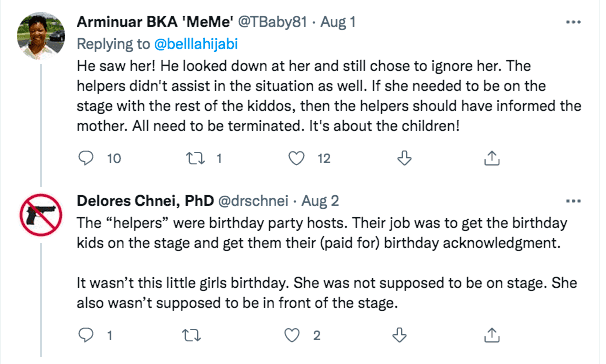 Maybe it’s just me, but it seems like the point that everyone in this Twitter thread missed is how that little girl must have felt to be ignored — whether or not the mascot saw her.

The fact is, the mom spoke up and asked the manager to right the situation, and instead of offering for the little girl to meet the mascot and get a high-five (you know, be kind to a child and help an upset mom feel better), the manager dismissed the entire incident.

I have watched this video about a dozen times, and I honestly can’t tell what on earth happened.

But, I will say that it’s a damn shame that every adult in that room, except for the mom, seemed to not get that a child’s imagination and excitement is what mattered at that moment.

Seeing A Pediatrician As A Grown Up…